I've recently become a convert to the GNU screen terminal window manager when working on the command line. I've been particularly pleased with it when managing the Raspberry Pi things I've been playing with, like the home automation stuff I've been getting into with Home Assistant.

I love the ability to detach and re-attach sessions, so I can happily do things like reboot my router while configuring it without losing what I was doing on the Pi. The other big thing for me is the ability to split a terminal session into multiple panes/regions, and have different terminal prompts running in each. Like this: 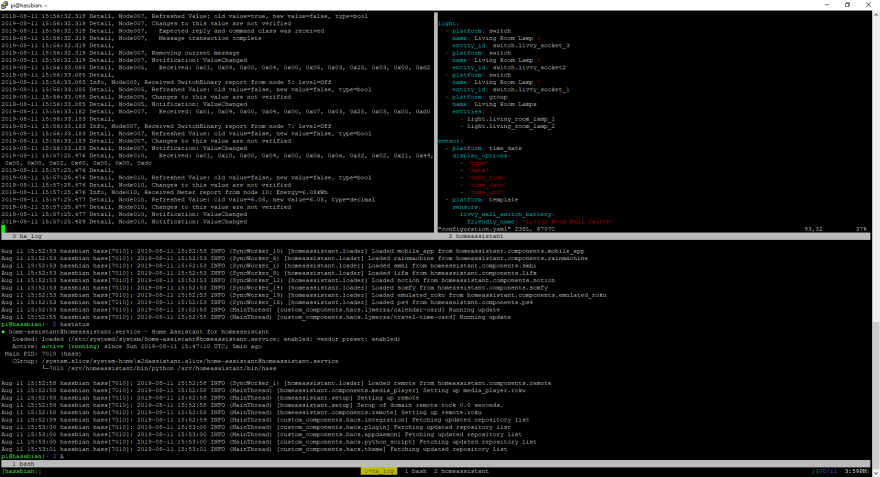 Here I've got a terminal doing a tail on my Z-Wave network log, my HA configuration.yaml open in vim in a terminal sudo'd to the homeassistant user, and an extra terminal down the bottom for command line stuff using the pi user. All sitting in a PuTTY session. It's sweet!

But the point of this is not to convince you to use screen (although you totally should), it's to document something that spent the day driving me nuts. I want to be able to easily switch between the regions of this session using "Ctrl-A" + arrow key. Should be easy enough, right? Just find the config and put something in there.

Well, yes, but exactly what was a bit annoying. The documentation isn't very clear about how to do this, suggesting that you need to use the bindkey command. Eventually I got something working after a fashion. My first solution looked like this, and worked pretty well:

I wasn't super happy with this though. The problem is that you have to work out exactly what the arrow keys translate to through your PuTTY session, and explicitly add the Ctrl-A keybinding at the start. That's a bit unpleasant though, for two reasons:

I found a much neater way, though, as there is an undocumented -k option to the
bind screen command. This allows you to specify a key by name to be used after the screen command mode has been entered.

Since bind only works for keys once we're in the screen command mode, this solves both our problems above. So now I've got the following in my ~/.screenrc, which is much neater:

Next-level Commands for the terminal

Mike Thomas
Reverse engineer
I passed the CPACC exam
#a11y #career #certificate
When can you declare yourself a Full-stack Dev?
#discuss
What Makes You Stay In A Community?
#discuss #community #watercooler

Once suspended, whatang will not be able to comment or publish posts until their suspension is removed.

Once unsuspended, whatang will be able to comment and publish posts again.

Once unpublished, all posts by whatang will become hidden and only accessible to themselves.

If whatang is not suspended, they can still re-publish their posts from their dashboard.

Once unpublished, this post will become invisible to the public and only accessible to Mike Thomas.

Thanks for keeping DEV Community 👩‍💻👨‍💻 safe. Here is what you can do to flag whatang:

Unflagging whatang will restore default visibility to their posts.