When I was in elementary school, I won a science fair, and travelled to the far-off land of Moscow, Idaho for the state competition. While there, I spent some of my food money on the most magical sticker ever. It was a gleaming metallic unicorn with rainbow colored mane and tail. It brought me joy every time I saw it, and reminded me how hard I had worked and how exciting it was to travel to show off my experiment.

When laptop stickers started appearing, I felt the same way about them, a bit. They are reminders to us of things that we have done or accomplished, and they are signals to others about what we care about.

When I started at LaunchDarkly, I had one day in the office, and the thing I spent the most time on was talking with our (genius) designer Melissa about stickers and what we should do with them. We have just done a refresh of our Toggle character, and now they look like this: 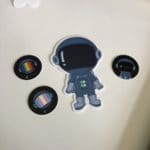 In the last year, I even built a sticker lightning talk to address why I care so much about this, and I’m always charmed to look out at the audience and see the smiles and nods as people feel seen and understood.

Why do we care?

Why do/should tech companies and other companies care? What makes it worthwhile for me to carry around a few pounds of stickers and experience the delights of confusing the TSA?

It is so important to people to be represented and known for themselves. Whenever I have stickers that relate to pronouns or sexual orientation, people make a delighted face and pick them up and hold them close. 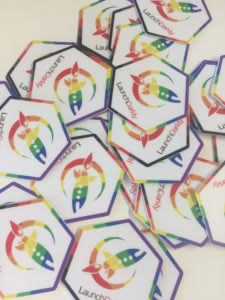 And it’s not just the things about personality – a Go programmer is happy to find a gopher. Someone who does DevSecOps loves to find a sticker that describes their job.

I can spot the networking people, for example. They are the ones who think the Fastly 418 (I’m a teapot) the Target 127.0.0.1 Sweet 127.0.0.1 sticker are hilarious. Because they are jokes that relate to HTTP return codes and IP addresses.

Then we have another layer of delight when we can put them on a laptop and be seen and found by others in our in-group. If I have a sticker from a conference you’ve been to, we can talk about our experiences. If you see a sticker that indicates we share something, it’s much less intimidating to start a conversation. 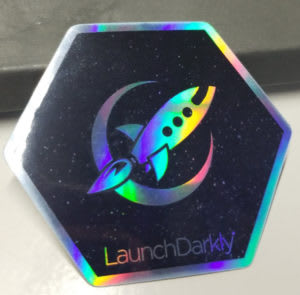 For example, if you see this sticker, there’s a pretty good chance that the person has actually met me.

Similarly, if you have a sticker showing in a video or on your laptop, it could be a lead to something that people want to know about. I get a lot of questions about my OSMI stickers, which is about Open Source Mental Illness.

Matt (Brender) Broberg did a talk that included an analysis of the return on investment of stickers. 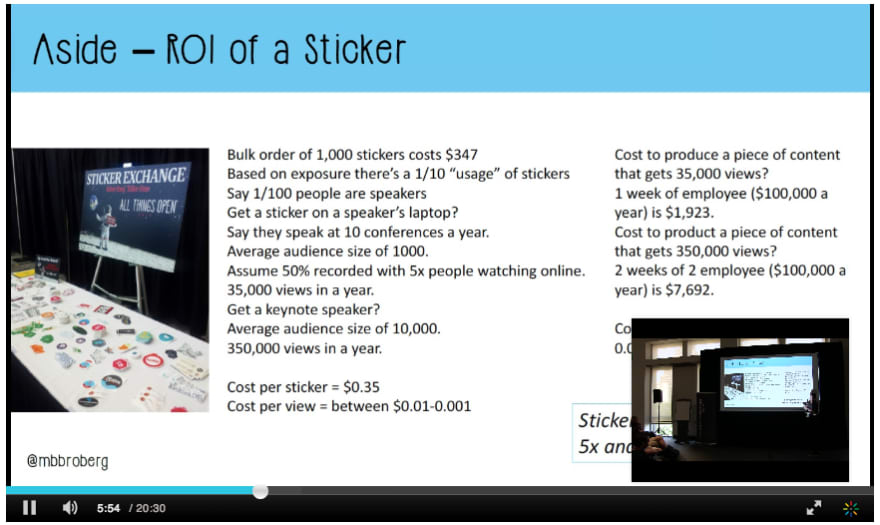 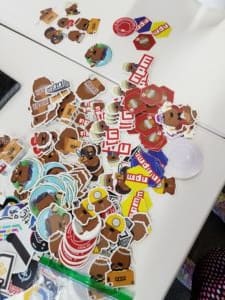 Even people who don’t know what npm is will take npm stickers because they are SO DARN CUTE.

One of the interesting parts of carrying my sticker bag around is that I can get a sense of what technologies are important to a community. It’s not always a 1-1 relationship with the technologies you would expect. Sometimes it is. Either way, I can see the level of interest around a company or technology. 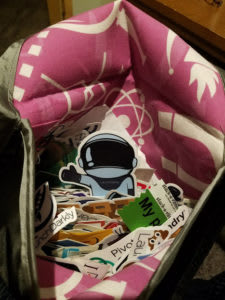 For example, I can tell you that the Kubernetes project is interesting and popular and has a good visual brand and is not doing enough to meet the market demand for their stickers. PHP and Drupal crossover, and that’s not surprising, but so do Verizon and Elastic. One conference may have people who don’t recognize a Chef sticker, and another might wipe out everything I have that relates to automation. I can tell from the stickers that Target developers take that they build a lot of internal tools instead of buying them. It’s interesting! 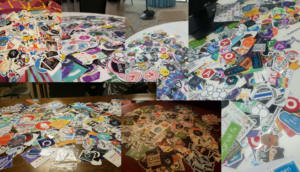 It’s not true that developers are universally shy and anti-social. Some of them are, some of them aren’t. What is true is that it’s hard for a lot of us to strike up conversations with strangers. When I spread out my stickers and invite people to browse and take them, it gives both of us a way to talk about technology in a way that is low-key, not intimidating, and doesn’t even require eye contact. We have time to talk or not talk as we wish. 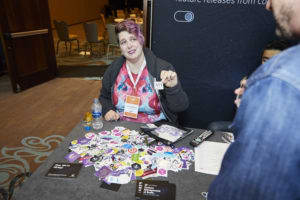 I’ve been carrying around The Sticker Bag for about three years now, and in that time I’ve spent a lot of time thinking about what makes a sticker attractive to someone. Some of it is identity and branding, but those feelings can be enhanced or reduced by the design and form-factor of the sticker.

Huge stickers are a mistake. I am almost never excited enough about about your product to dedicate 1/6th of my laptop space to it. I think 2 inches is about ideal – big enough to see and have impact, and small enough to fit in around other things.

Here’s what a set of huge stickers looks like: 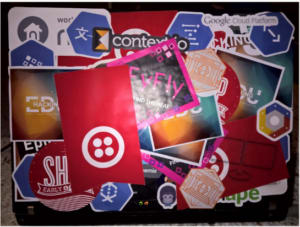 But wait! You don’t have to think about it, because, my friends, there is a standard! Visit sticker.how to read it. Interoperability is not just for software and hardware anymore.

I favor the standard hexagon, because the tiling looks really awesome, but I am not against die-cut stickers that have unique shapes. Hexagon stickers started as an “open source thing”, but have utility for everyone who wants to work together for maximizing laptop space.

I have previously questioned round stickers, because they are not an efficient way to use space, but I think they’re ok as long as they’re smallish. Big circles somehow seem even bigger than big rectangles.

My laptop has a combination of sticker styles, but I don’t put anything on there if I don’t know the people or use the product. 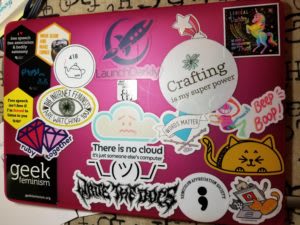 You can see how the Fastly 418 sticker is round, but fits ok with others, and the Spoonflower round sticker is too big to fit harmoniously.

If you like it, you should put your name on it. Visual branding is hard to do, but it doesn’t do you any good to print awesome-looking, high-quality stickers if no one can tell who the sticker represents.

For example, this sticker was adorable, but for the first year it was out, you couldn’t tell it was from InfluxDB. 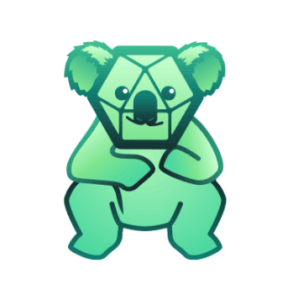 The next run of stickers had their name on it, thankfully!

Not everyone uses tabs, or spaces, or emacs, or vim. Not everyone wants to put stickers on their laptop. They find it cluttery or distracting or unprofessional. That’s fine. There are all sorts of people in the world. Don’t be judgy.

However! Some people would like to be able to represent themselves with stickers, but can’t, because they have a work laptop that they aren’t supposed to stick stuff on. In those cases, consider these sticker hacks:

Stickers may seem like child’s play to some folks, but it’s an interesting insight in to the cultures, self-representation, and identity of people we’re around. And it’s not just technology – miners and construction workers sticker their hardhats. Musicians sticker their instrument cases. If we have a flat surface, a lot of us feel like adorning it is a satisfying activity.

Delight for less than a dollar? Seems like a great deal. 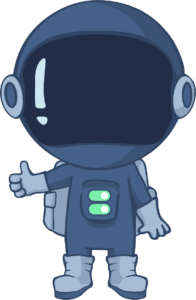 Docker, Best Practices for Developers & What Next?

Heidi Waterhouse
Heidi is a developer advocate at LaunchDarkly. She is passionate about clear communication, humane workplaces, and conference speaking. In her spare time, she sews dresses with pockets.
In which I am cranky about the urban/rural divide
#bestpractices #industry #life #personal
Semantic meaning is everywhere
#devadvocacy #ladyconferencespeake #speakerresource #speaking
Extremely Online People
#devadvocacy #industry #life #uncategorized