In my last post, I've talked about what is UNIX and it's history. In this second part of the UNIX Basics series, I'll be explaining the architecture of UNIX.

The whole architecture of UNIX can be divided into 4 different layers. They are 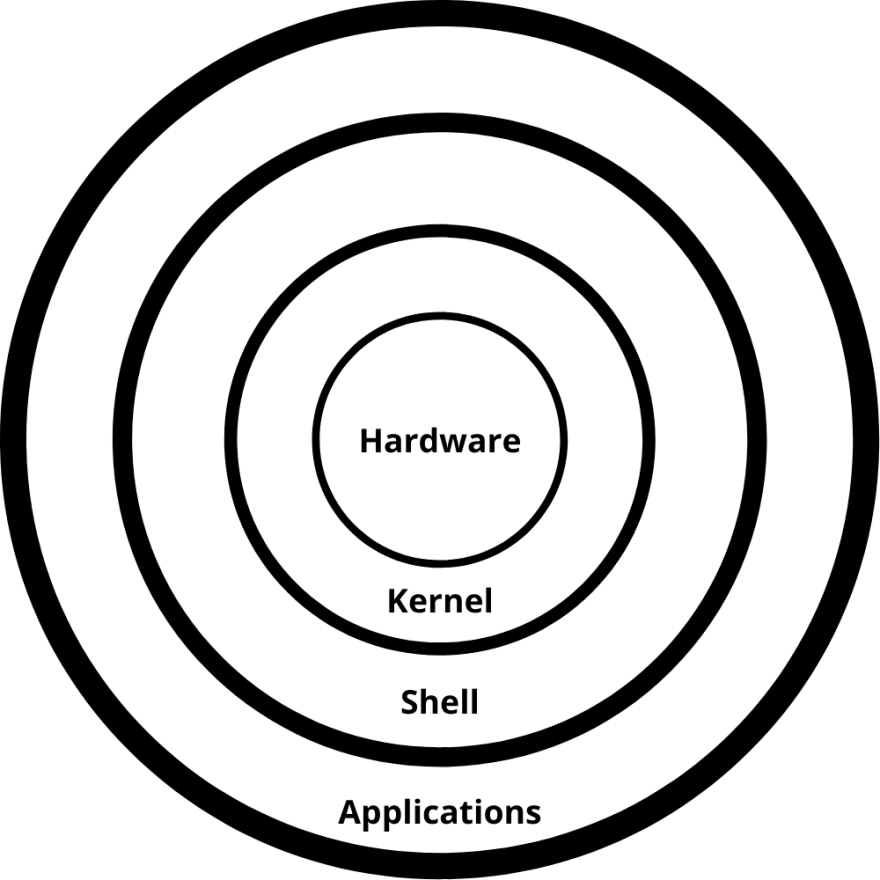 The hardware part is all the hardware in the computer, like memory, hard disk, input devices, output devices.

The kernel is the core of the UNIX operating system. This is the most powerful of all the four. The kernel is the one that interacts with the computer hardware. This is loaded into memory whenever the system starts up. The kernel provides a lot of support for the application program. It also does housekeeping jobs like process management, scheduling, file management, device management, network management, memory management, and other jobs that the user shouldn't bother about. It is always running, even if no program is currently running.

The shell's job is to act as an interpreter. When the user gives the command, the shell reads the commands, understands them, and then sends a request to execute the program. Then when the program is executed it again sends the request to display the program to the user on-screen. The shell is also like an interface between the user and the kernel. Even though there’s only one kernel running on the system, there could be several shells in action, one for each user who is logged in.

The whole architecture of UNIX is a deep concept, so I won't be going further. I think I've covered all the basic topics. I haven't started writing the next part in the UNIX Basics series, so I don't know what it will be about yet, but be sure to keep an eye for that.

If you find any errors or mistakes, please comment down below, I'll be sure to correct it.

Yadunandan Bhat
Just an average CS student, trying to write about programming and technology.
UNIX Basics - What is UNIX and the History of UNIX
#unix #gnu #linux #programming
How to install and setup GitHub CLI
#linux #development #webdev #github

Once suspended, yadunandanbhat will not be able to comment or publish posts until their suspension is removed.

Once unsuspended, yadunandanbhat will be able to comment and publish posts again.

Once unpublished, all posts by yadunandanbhat will become hidden and only accessible to themselves.

If yadunandanbhat is not suspended, they can still re-publish their posts from their dashboard.

Once unpublished, this post will become invisible to the public and only accessible to Yadunandan Bhat.

Thanks for keeping DEV Community 👩‍💻👨‍💻 safe. Here is what you can do to flag yadunandanbhat:

Unflagging yadunandanbhat will restore default visibility to their posts.