Reduce the distance between milestones, and you'll go much farther. That's what I learned from a seasonal update to PokÃ©mon Go's reward systems. 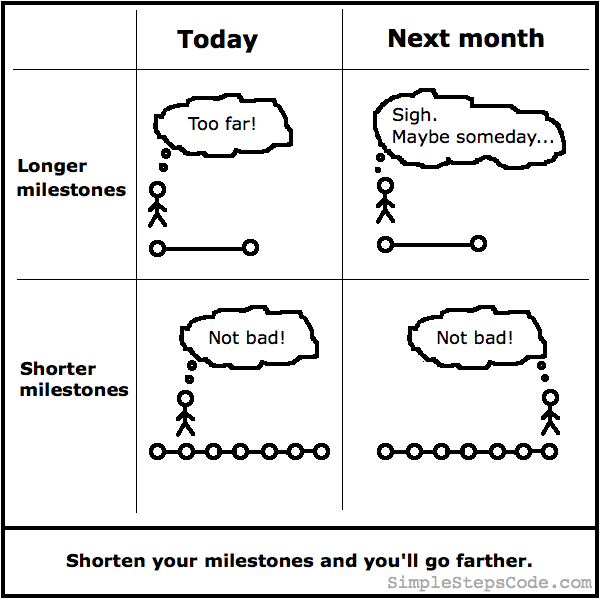 PokÃ©mon Go rewards you for hitting certain walking distance benchmarks. However, the distances were long for relatively small rewards.

Then a temporary update cut the benchmark distances in half.

Suddenly I found myself outside walking a lot more, and my friends had the same experience. Now that each milestone was more reachable, I was more motivated to move. I felt like each step mattered, so I was more willing to take steps.

The end result was that I traveled a much greater total distance than in the past.

This was a eureka moment.

I could apply this principle to other things, like learning certain coding skills (or really learning anything).

As an example, I had wanted to get good with HTML5 canvas for a while, but that sounded like a big goal so I let it sit. Eventually I tried shrinking the distance between milestones.

I told myself to code one circle. And I did. That was the momentum I needed. Soon I had built up to a glowing laser-pong game, gravity physics, an arrow flying through the air with an accurate trajectory, and more.

According to cognitive science, here are the main benefits of shorter milestones in learning:

Motivation and retention are common stumbling points for learners, so it's great to have a trick that can address both points.

If there's something you want to learn, try shortening your milestones. You might amaze yourself.

Now I'm curious to hear from you:
What's something you've been wanting to learn, and what steps have helped you make progress?

This article originally appeared on Simple Steps Code, which helps people learn JavaScript and actually be able to use it. Feel free to check it out if you're curious to see more content like this.

Once suspended, yaphi1 will not be able to comment or publish posts until their suspension is removed.

Once unsuspended, yaphi1 will be able to comment and publish posts again.

Once unpublished, all posts by yaphi1 will become hidden and only accessible to themselves.

If yaphi1 is not suspended, they can still re-publish their posts from their dashboard.

Once unpublished, this post will become invisible to the public and only accessible to Yaphi Berhanu.

Thanks for keeping DEV Community 👩‍💻👨‍💻 safe. Here is what you can do to flag yaphi1:

Unflagging yaphi1 will restore default visibility to their posts.