The story behind my first Stack Overflow answer.

I was recently asked to add a feature to a Rails app. The app is a Contact Management System (CMS). Each contact has a name, an email address, and a phone number. I was asked to add the ability for multiple phone numbers to be added to each contact; each phone number should be able to be either a home number, work number, or cell-phone number. Also, one of the numbers should be designated the default number.

The way I approached it was by moving the phone numbers into a separate PhoneNumber class, with a many-to-one relationship to the Contact class, so now every contact could have many phone numbers, and every phone number belongs to a contact.

Additionally, I now had to update the 'New Contact' form to accept the nested attributes for the PhoneNumber class, as well as add a radio button so users can select which number would be the default, and this is where I ran into a problem.

First a brief explanation of how radio buttons work:

If you look at the HTML for a form with radio buttons, you will see that each button is it's own input element, what links them together is that they all share the same name attribute. This is what it looks like:

Notice how each input has the same name (picker), that's what lets the browser know that they are all linked and that it should only allow one of the buttons to be picked at a time.

Rails has a built in helper method that generates radio buttons for forms; the radio_button method. When that method is called on a form element Rails will automatically generate the proper HTML element with the correct attributes so that when the form gets submitted your server will know how to construct a new object (or update an existing one) from the data.

As usual, I turned to Google and was pretty excited to see that one of the first results linked to a question on Stack Overflow that sounded just like the problem I was having. The problem was that when I clicked on it, I saw that even though the question was first asked in 2011, it only had three answers, and none of them solved my problem. 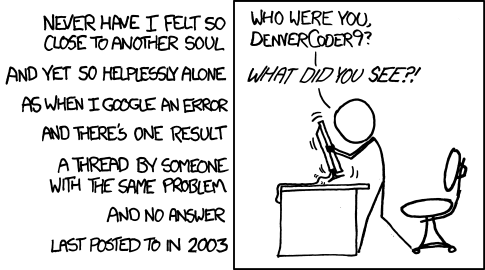 An incomplete solution provided by one of the answers was that, instead of attaching the radio button to the existing form, to have it as an independent radio_button_tag and to manually supply the name as well as any other attributes needed. That would result in a form that looked like this:

You will notice that the number and location fields are attached to a phone_form object which gives them their name attribute, but the radio button tag isn't attached to anything, instead the name (contact[default_telephone])is supplied as an argument.

A Solution To Every Problem

I spent some time thinking about the problem and realized something. The other fields, the ones that were attached to phone_form were probably getting their information from the phone_form object. If my radio_button_tag was still within the phone_form scope (which it was, as long as I put it before the first <% end %> tag) it should have access to the phone_form object and any methods available to it.

I would have to find a way to inspect the phone_form object and see what was available through it.

One of my favorite debugging methods in rails is to put a raise <object>.inspect at a spot in my code, then when my app would reach that breakpoint it would display the object on the screen as an error, along with a console that would have access to any variables available at the breakpoint.

The problem was, I have only used that method in my controllers, I never used it in a view yet, and while I had a hunch it would work, I wanted to make sure. So to start with I put the following in the middle of my view: <% raise "Hello World".inspect %> and navigated to that page. Sure enough, I got the following screen:

Perfect, now let's inspect the actual object. I put the following into my form, right before the radio button tag:
<% raise phone_form.inspect %>:

Yeah, quite an eyeful. That's what a Ruby Object looks like, and this object was apparently a FormBuilder object. All the information I needed was somewhere in the huge wall of text; the problem was how to find it.

I headed to the console at the bottom to see what I could find. Running phone_form just gave me the same wall of text obviously, so I decided to run phone_form.methods to see what methods were available to the phone_form object.

I actually ran phone_form.methods - Object.methods to remove any methods that were generic to all Ruby objects and got:

Playing around with some of the more promising sounding method names, I found the the :index method did indeed give me the index of the current form, and :object gave me the object that was tied to the form, so my final radio tag ended up looking like this:
<%= radio_button_tag "contact[default_telephone]", phone_form.index, phone_form.object.default %>

The first argument ("contact[default_telephone]") is the name attribute, which is the same for all phone number forms and ensures my radio buttons would act like radio buttons.

The second argument (phone_form.index) is the value passed in by the radio button, and is equal to the index of the form currently being worked on, and will be used by the controller to identify which phone number is the default one (as I will show soon).

Now I just had to update my controller to let it use the information passed in by my form. I added the following two lines of code to the beginning of my create and update controllers:

There was just one thing left to do. I remembered what it was like to find that Stack Overflow question without a proper answer, I realized I would probably not be the last person to ask that question, so I headed back the question and added my very first Stack Overflow answer!

You can use radio_button_tag and pass it your own name attribute.

Being that you are still in the choice_fields scope, you have access to a few methods that can expose the object you are working on, which will help you name your radio_button_tag properly.

The following code will give your…

As a code newbie, I have spent countless hours reading questions and answers on Stack Overflow. Stack Overflow has been my buddy, mentor, and big brother. Being able to give back and contribute was a huge milestone. Hopefully, that answer will be the first of many.

This article has been cross-posted from my blog Coding Hassid
You can read more about my coding journey there, or by following me on Twitter @yechielk

Yechiel Kalmenson
He/Him/His I'm a Software Engineer and a teacher. There's no feeling quite like the one you get when you watch someone's eyes light up learning something they didn't know.
Who's Going To RubyConf?
#ruby #networking #watercooler #discuss
Talmudic Gems For Rails Developers
#programming #rails #mentoring #community
Part 3: Add A Dead-Man's Switch To A Rails Application
#ruby #rails #twilio