I am writing this blog to explain the basic and advanced usage of these functions.

Use setImmediate() when you want to execute some function asynchronously, but as soon as possible and after finishing the current block.

When you run following code, callback function passed to setImmediate() is executed immediately after the last line in this code

Use setTimeout() when you want to execute some function asynchronously, after a specified delay and after finishing the current block.

There is one important point though - It is not guaranteed that the callback to setTimeout function is invoked exactly after the specified delay. The reason is explained later on this page.

So far so good. Above information is enough for basic usage of these functions.

Let's dive deep into NodeJS Eventloop to know how these functions are different from each other and from process.nextTick(). 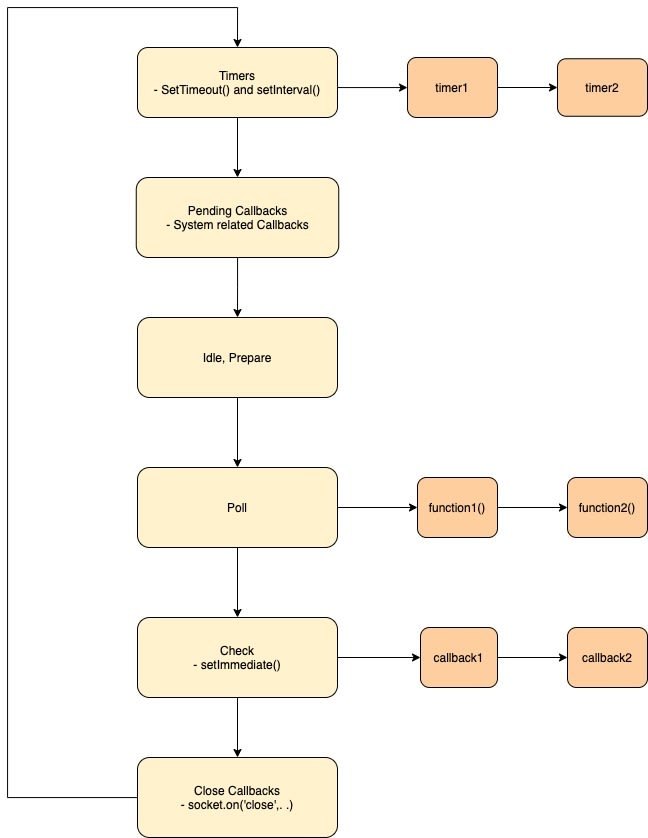 In this phase, all timers and intervals are registered as well as tracked. It holds the stack of timers and goes through all active timers one by one. As soon as the timer expires, the callback function is added to the stack that is executed in Poll phase.

This is the reason callback is not executed immediately.

Executes I/O callbacks deferred to the next loop iteration.

Most of the execution is done in this phase. This is where the javascript code you have written in your file executes.
Node will go through the stack and execute all functions synchronously from oldest to the newest until the queue is empty.

It also retrieves new I/O events; executes I/O related callbacks (almost all with the exception of close callbacks, the ones scheduled by timers, and setImmediate()); node will block here when appropriate.

Note that each phase has its own queue that gets executed before Node moves on the next phase. One iteration or cycle of of this loop is known as 'tick'

Now let's switch back to our main topic.

setImmediate() and setTimeout() are similar, but behave in different ways depending on when they are called.

setImmediate() is designed to execute a script once the current Poll phase completes. Execution of this callback takes place in Check phase (5).

setTimeout() schedules a callback function to be run after a minimum threshold in ms has elapsed. The expiry of timer is checked in Timer phase (1) and execution of callback happens in Poll phase (4).

We have two calls that are similar as far as users are concerned, but their names are confusing.

From NodeJS documentation: -> We recommend developers use setImmediate() in all cases because it's easier to reason about.

Here is an example putting together all functions

How to send Email with NodeJS in 2022

Learning to build an API in NestJS (Node + Typescript)

How to Create a New Astro JS App: Cheatsheet

Once suspended, ynmanware will not be able to comment or publish posts until their suspension is removed.

Once unsuspended, ynmanware will be able to comment and publish posts again.

Once unpublished, all posts by ynmanware will become hidden and only accessible to themselves.

If ynmanware is not suspended, they can still re-publish their posts from their dashboard.

Once unpublished, this post will become invisible to the public and only accessible to Yogesh Manware.

Thanks for keeping DEV Community 👩‍💻👨‍💻 safe. Here is what you can do to flag ynmanware:

Unflagging ynmanware will restore default visibility to their posts.