YugabyteDB is composed of two layers: PostgreSQL, for the YSQL API, plugged on top of DocDB, the distributed storage and transaction. DocDB is also accessed by other APIs, like the Cassandra-like YCQL. And then the namespaces are different. In DocDB, tables or indexes are identified with a table_id. DocDB doesn't hole a full dictionary, but the table_name and keyspace_name attributes are also recorded. This is what you will see in DocDB statistics, lotgs, or console, like the Web GUI from the http://master:7000 endpoint: 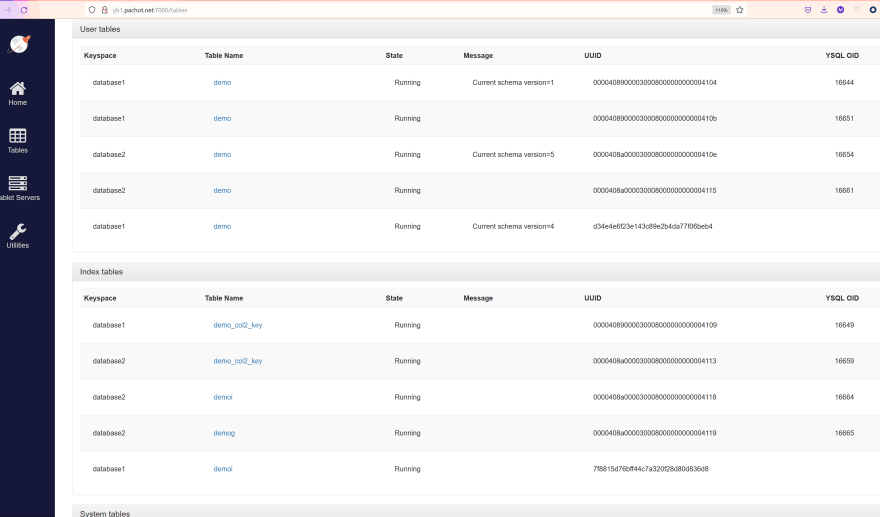 I've created them from YCQL, the Cassandra compatible interface, with:

But the others show version 3 UUID (according to the 13th digit), and have duplicate keyspace and table name. The clue is in the YSQL OID column: this is the PostgreSQL OID.

Those tables where created from YSQL, the PostgreSQL compatible API, with:

SQL is can have complex schemas and is more agile. Within a cluster we have:

This has one consequence, you cannot identify a table with the keyspace_name,table_name pairs. You need the table_id.

As usual in IT, the naming may be confusing because there is an history behind it, even for a new database like YugabyteDB. YugabyteDB started with the distributed storage, DocDB, storing tables in keyspaces. Those are the same terms as used in Cassandra. Then the first API was the YugabyteDB Query Language (YQL). But then came a more sophisticated one, the SQL API, so that YQL became YCQL (C for Cloud but you can hear Cassandra in it). And The SQL API was YSQL. But who knows, one day, we may have a MySQL compatible API, so internally we must know where the table comes from (the OID has a meaning for PostgreSQL only) and this is the PGSQL table type.

You know this quote attributed to Phil Karlton: "There are only two hard things in Computer Science: cache invalidation and naming things". The Current schema version=2 in the screenshot above is about cache invalidation (the dictionary is in the master, cached by the tserver sessions, so each DDL increases the version number). The naming difficulty is because of the flexible two-layer architecture of YugabyteDB. Each layer may have its own vocabulary. Don't panic, the Developer Advocates are there to help, as I did in a previous post about the "partitioning" - term that has a meaning in DocDB (from the Cassandra sharding vocabulary) and in YSQL (from the PostgreSQL declarative partitioning).

Now, you know that you can identify any table, YCQL or YQL, with its table_id (displayed in the UUID column) and, as you speak 0x currently, you may have recognized hat the last 4 digits are actually the hexadecimal for the PostgreSQL OID (displayed in the YSQL OID column). There's also 3000 and 8000 in it as a magic number for YSQL. And the first digits are the OID of the database (which name is displayed in the keyspace column).

Saying it in English is not easy, but fortunately all is normalized and can be fetched from SQL:

I queried from database2 which is the reason you see only the tables and indexes that were in the keyspace database2 in the screenshot above.
The 2 Tables (relkind=r with oid 0x410e and 0x4115) and 3 Indexes (relkind=i with oid 0x4113 0x4118 0x4119 ) are there. The access method (amname) are lsm for LSM Tree indexes and ybgin for the YugabyteDB implementation of GIN indexes on top of LSM Trees.

But you see no access method for the tables, and one additional LSM Tree index demo_pkey. The reason is that tables in YugabyteDB are stored in their primary key index (as in MySQL InnoDB, SQL Server clustered indexes, or Oracle IOT) for fast access by the primary key. PostgreSQL dictionary is designed for heap tables where all indexes are secondary, including the one to enforce the primary key. This is why the physical name of the table, with the _pkey suffix, is an index (relkind='i' and amname='lsm'). The logical name, with relkind='r', is the one giving its oid to the table_id.

There are a few more subtleties. Colocated tables share the same storage:

The tables, colocated or not are still visible with their UUID composed of the database OID and table OID:

Note that without defining a primary key, an internal key is generated but we don't see the LSM index.
The colocated tablet hasa UUID as a table one, with zeors for the table OID part, and some additional tags: 0000414c000030008000000000000000.colocated.parent.uuid
You can click on demo1 or demo0 as different tables, but they will show the same table id as they are colocated.

Web3 & Decentralization: What it Means for Data Storage

Pandas and SQL side by side