When you first learned JavaScript, you might have started by writing something simple like creating a string primitive:

You likely even learned how to use split to turn that string into an array of substrings:

You didn't implement split yourself, though. Instead, split is defined on hello's prototype object, which comes from String. Prototypes are JavaScript's method of inheritance and it allows properties to be shared across all object instances.

This diagram, modified from MDN and created with Excalidraw, shows one way you can think about the prototypal inheritance of hello:

The prototype property and an object's prototype

A constructor function defines the prototype object on its prototype property; this is the object that all inheriting objects will link to. For example, to see all of the properties inherited by instances of String, we can log String.prototype:

To access the prototype of an object, we can call Object.getPrototypeOf(obj) or use the __proto__ property of the object in many web browsers. Since hello is an instance of String (or, coerced to String at runtime), we should expect to see it linked to the prototype object defined by the String constructor function:

When we called hello.toLocaleString(), JavaScript:

Note: MDN is a handy way to tell which properties are defined on the prototype of built-in objects. For instance, the Array page links to documentation for all of the different properties, such as map and pop, that are defined on Array.prototype.

Walking the prototype chain in JavaScript

We briefly saw a simple graphical representation of hello's prototype chain earlier. Now that we know how to access an object's prototype, we can write our own function to show the chain programmatically:

Note: current.constructor.name is the name of the constructor function that defines the prototype.

If we run this in the browser with hello, we get the following output: 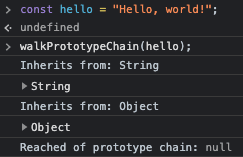 We can easily define our own properties on a constructor function's prototype property. Let's say we have a program that creates many arrays that we commonly want to ensure only contain truthy values. We can define a whereNotFalsy property on Array's prototype to make this available on every array we create:

Now we can call whereNotFalsy on the subsequent arrays we create:

Prototypes allow objects to inherit shared properties. An object's prototype refers to the object that it inherits properties from. This prototype object is defined on the prototype property of the constructor function that
creates it. Inheriting objects contain a link to the prototype object and it can be accessed through the __proto__ property in web browsers or by calling Object.getPrototypeOf in other contexts.

When an object's property is accessed, JavaScript first checks its own properties, then walks its prototype chain to find the property––this is how objects are able to inherit properties through prototypes. Lastly, we can directly modify the prototype of a constructor function by accessing its prototype property, which will affect all inheriting objects.

Once suspended, zachsnoek will not be able to comment or publish posts until their suspension is removed.

Once unsuspended, zachsnoek will be able to comment and publish posts again.

Once unpublished, all posts by zachsnoek will become hidden and only accessible to themselves.

If zachsnoek is not suspended, they can still re-publish their posts from their dashboard.

Once unpublished, this post will become invisible to the public and only accessible to Zach Snoek.

Thanks for keeping DEV Community safe. Here is what you can do to flag zachsnoek:

Unflagging zachsnoek will restore default visibility to their posts.