So let's say you've written an awesome app in Next.js and you want to deploy it to a nifty containerized platform like Digital Ocean or Fly.io. But let's say that you, like me at the start of last week, have never containerized a Node app before and need a crash course in how to do that?

Here's what I learned going through this process to deploy Tweet Sweep to fly.io - both the naive first steps for making a container work at all and then also some necessary optimizations for it.

If you want to follow along, you will need Docker Desktop and Yarn installed. To keep things replicable, I'm using the Next.js Blog-Starter-Typescript example in these instructions. You can set that up locally with this command:

As a side note, the tips and tricks in here are generic for all containerized Node apps, but the Dockerfiles themselves will only work as an untweaked copy-paste if you're using Next.js. So, if you're using a different platform you might have to tweak which files get retained in your final container.

The Basics - Just make it work

So let's start with the 101 - what is Docker and why you want to use it. At its core, Docker Containers are tiny virtual computers serialized to disk in a standardized format. To make them, you need three ingredients:

Using these three components you can wrap up your software into a standardized container that can be run on any machine that has the Docker software installed. (Note that this has a big "in theory" caveat attached - if you are doing complex, advanced operations then you might run into the limits of Docker's capabilities. However, for a straight-forward Next.js app like the one I'm using here, it works very well.)

So what do these instructions look like for our Next.js application?

Put these in a file named Dockerfile in the root folder of your app.

So what does this do? Well, Docker will step through these instructions one by one and do the following:

This tells Docker that your app is building on a container that has Alpine Linux and Node 14.17 (with npm and yarn) preinstalled.

These are our first real instructions - we make a directory called /home/app, give ownership of it to a user named node, make it the "working directory" for our container (where Docker expects our main program files to live), and copy the files in the directory where we ran docker build into the container. Remember the container is basically a virtual little computer, so we have to copy our files in there to access them!

We then become that node user. By default Docker runs as root on the contained machine. But that is pretty dangerous since it gives root privileges to whatever code we run, meaning a little security flaw in Node or one of our NPM dependencies could potentially give access to our whole server. So, to avoid that, we switch to a non-root user.

We install our NPM dependencies and build our Next.js server in production mode.

Now it's time to execute those steps and make your container. Run the following command in a terminal in your project directory (you can replace some-name with a personal tag like zacks-blog-1.0):

Your built image, containing the virtual machine ready to run your web app, will now show up locally if you check docker image ls:

Let's start it up:

(You can add the -d flag after run to run the server in the background instead.) 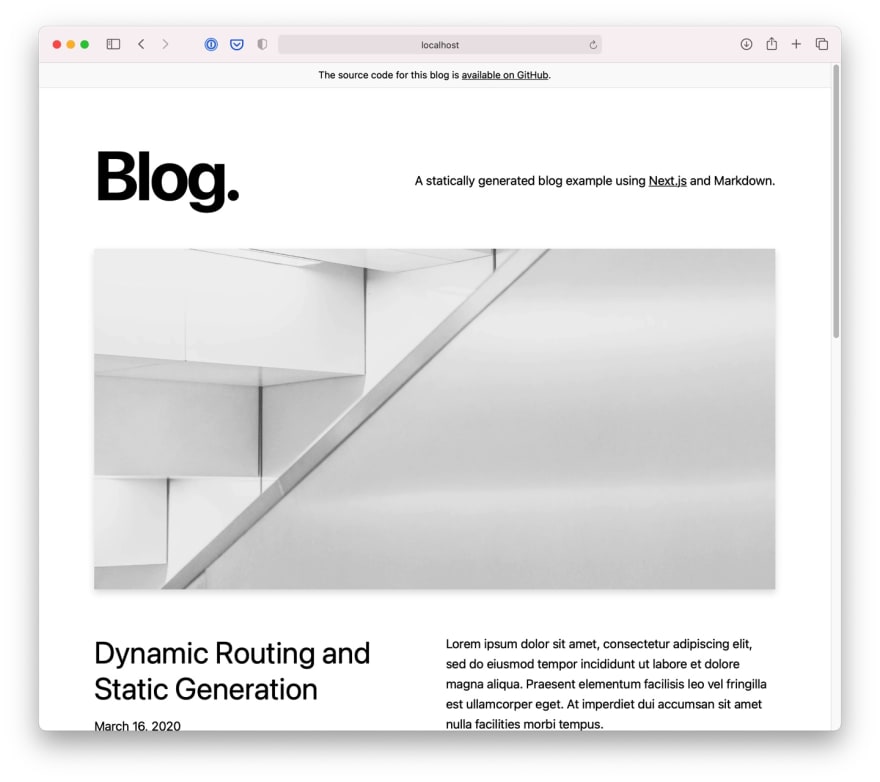 Optimize it - Getting this production ready

Great! You have now containerized your app. But before you go deploying it to your favorite hosting platform, there are a few things we need to do.

You might have noticed above that the size of our built image is over 600MB - that's over 4x the size of our project on disk outside of the container! This problem only compounds as your apps get more complex - the built versions of the Tweet Sweep Frontend container were more almost 5GB at this point! That's a lot of data to upload to your servers!

Almost all of this size issue is related to one particular quirk of Docker - almost every line in the Dockerfile creates a new "layer" in your final Docker image. Each layer captures the changes made to the virtual machine after that line runs. This is a powerful optimization tool because it allows Docker to reuse work it's already done - for example if you have some setup that never changes like our mkdir line, Docker can compute that layer once and reuse it for all subsequent builds. However, it can also lead to image size issues (since lots of unneeded files might wind up being stored in those layers) and security issues (since you might capture secret values in those layers that could be siphoned off by someone who gets access to your final image).

You can see the layers and their respective sizes using this command (credit to this post where I got it from):

From this we can see that about 117MB of the image size happen before our first command - this the base size of the Alpine-Node image we're building on so there isn't much we can do about that. But let's focus on the two main optimizations we can do after that point:

In our naive Dockerfile we run the command COPY --chown=node:node . .. This copies all the files in our current directory into the Docker container. This is almost always not what you want! For example, you might have an .env file with secrets in it that will wind up in plain-text in the final Docker image. (You should use the env secrets feature on your hosting platform instead.)

In this app's case this unnecessarily copies the node_modules folder (since we then yarn install it again) and .next folder (since we rebuild the app inside the container). We can fix this with a .dockerignore file. This file, in the root of our project, tells Docker to skip certain files and folders when running COPY.

Advanced: Get your Container a Container

Now the galaxy brain move here is to use containers for our container. We're going to create two that are used only to build the application separately from the one that's uploaded to the server. This saves us from having to upload the layers containing all the files used or created en route to that destination. Here's the Dockerfile for that (with comments explaining along the way what each block does):

(Edit: After I posted this, Vercel got in touch to point out they have their own post with a sample Dockerfile. I've now incorporated some tips from theirs into this one.)

What has changed, then? Well, if we list our images:

You can see we've reduce our final build image's size by almost a factor of 3! That's a lot less data we'll need to upload to our server with every deploy! I saw similar results when I employed this strategy on Tweet Sweep's containers, saving me gigabytes of upload bandwidth with every deploy.

Ok, so now that we have our app containerizing successfully, how do we actually deploy? For this, I've been using fly.io because their support for Docker is strong and their service has a generous free tier. But if you'd rather use Heroku or Digital Ocean they have strong support for Docker as well.

With Fly, I'd recommend just following their step by step instructions for deploying Docker. TLDR; you have to create an app on your account and a corresponding fly.toml file locally, then the command flyctl deploy will automatically run your Dockerfile build, upload all the resulting layers to their service (this is why it's important to optimize their size!), and then start them on a VM server. After that, deploys really are as easy as running flyctl deploy again thanks to the compartmentalization of containers!

I'm still learning Docker so these optimizations are just the first I've come across. If you've played around with it and know some more ins-and-outs one should include while containerizing a NodeJS app, please do let me know down in the comments.

Zack Sheppard
I used to be an actor, but programming jobs are easier to come by. I've been doing this now for 11 years. I focus on pixels and experience, especially on iOS and the web.
I Promise you won't have to await long to understand async in Javascript
#javascript #webdev #beginners #node
Speedy and Stylish - How to style NextJS with Bootstrap 5, SASS, and PurgeCSS
#webdev #tutorial #css #nextjs
App 101: What is a Work Queue and how to make one in Node
#webdev #beginners #node #serverless

Once suspended, zackdotcomputer will not be able to comment or publish posts until their suspension is removed.

Once unsuspended, zackdotcomputer will be able to comment and publish posts again.

Once unpublished, all posts by zackdotcomputer will become hidden and only accessible to themselves.

If zackdotcomputer is not suspended, they can still re-publish their posts from their dashboard.

Once unpublished, this post will become invisible to the public and only accessible to Zack Sheppard.

Thanks for keeping DEV Community safe. Here is what you can do to flag zackdotcomputer:

Unflagging zackdotcomputer will restore default visibility to their posts.