A while back, I jumped onto the hype train and tried to host Learn JavaScript's marketing page on Netlify — I wanted to join the cool kids. After getting charged for it, I switched to Vercel and I got charged for it (again). I finally went back to good old Digital Ocean.

In this article I want to detail the differences between hosting on Netlify, Vercel, and Digital Ocean, along with what I experienced in the process.

What is Netlify, Vercel, and Digital Ocean?

Netlify and Vercel are serverless platforms. They let you put websites up onto the web without having to fiddle with servers. You can read more about serverless if you're curious about what it is.

Vercel and Netlify have practically no differences between them (as far as I can tell). They're just competitors providing the same thing.

Digital Ocean is a dedicated server. It's harder to set up a site with Digital Ocean compared to Vercel/Netlify since you need more knowledge about Linux and Nginx.

Choosing between these platforms

There are two main factors to consider when choosing between these platforms:

Vercel and Netlify are easier for frontend-only projects. You can link to a Github repository and you'll have your website up and ready.

Digital Ocean lets you set up a server. It's harder to use because you need to know:

Although Digital Ocean is harder to set up, the rewards can be worth it. (See the pricing section below).

Netlify prices according to the amount of bandwidth you use. For example, you get 100GB for free with Netlify.

I thought so too, so I put the Learn JavaScript's marketing site onto Netlify for a test run. This site averaged 5,101 visitors in the month I did the test.

So 100GB is very little after all, since 200 GB only supports approximately 2,700 visitors.

I pulled the plug on Netlify at this point, as I'm paying too much for it. I only pay $10 on Digital Ocean for way more visitors!

Vercel seems to be free forever at first glance. There aren't any limits shown on the pricing page. 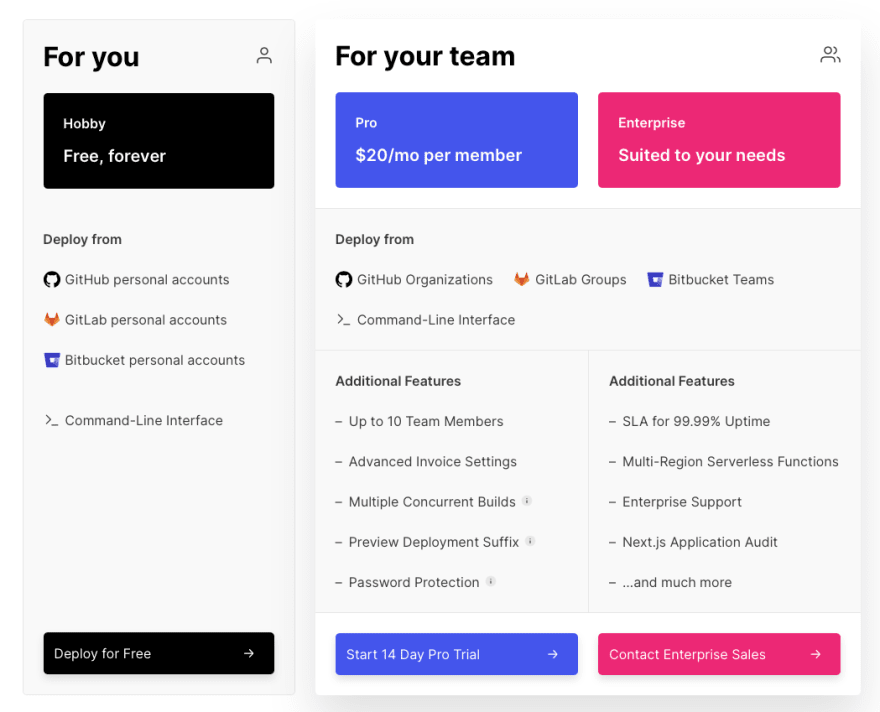 I was skeptical — it seemed too good to be true. But I took my chances and hosted Learn JavaScript's marketing site on Vercel after Netlify.

Some time later, I received an email saying I breached the fair use policy.

I was shocked — I breached a policy?! I always try to abide by the rules and act in good faith. Being told I breached feels VERY uncomfortable.

After asking further, I discovered that Vercel's free tier has a cap at 100GB Bandwidth too. This information is hidden inside a Fair-Use Policy page (not on the pricing page).

At this point, I gave up on serverless architecture completely and went back to good old Digital Ocean.

Digital Ocean's pricing seems complicated at first glance because there are many factors involved.

For Digital Ocean, you can imagine you're renting a computer and the factors stated are the specs of each computer.

You don't need a super fast computer for servers. The $5 or $10 plan is going to be good enough most of the time.

For example, I'm running the following two sites on one $10 plan, and I don't see any problems with it so far.

I don't know how much bandwidth I'm using, but that doesn't matter since Digital Ocean doesn't charge according to bandwidth.

If you have a small project: Go with netlify.

If you have a larger project: Use Digital Ocean.

I wouldn't choose Vercel anymore because of that dark pattern pricing strategy.

By the way, Use this link to get a free $100 credit if you want to try out Digital Ocean. Happy server(less)-ing!

Jason Lengstorf reached out to me and mentioned he only used 7GB for 32,000 visitors on learnwithjason. We talked a little and we suspect the high amount of bandwidth usage is due to two things:

I'm willing to give Netlify another try now, but I'm still frustrated about the lack of transparency in "bandwidth" and how I wasn't able to debug it on a per page or per resource basis. Jason said he'll raise it internally with the team so that really helps!

I look forward to trying out Netlify again when there's more transparency with bandwidth.

Why I don’t like API frameworks together with Serverless