A few days ago, I wrote about using tailwind with web components at run-time: 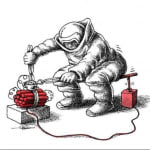 At the time, I was actually trying to figure out how to do this at build-time but was struggling to find an existing solution. Good news: I found one!

Keep in mind, this example is specific to lit-element.

As in my previous article, the same setup was used:

As discussed in my last post, tailwind doesn't seem to support shadow DOM or web components in general out of the box.

I previously solved this by using twind, a great little library which behaves as a 'tailwind runtime' and produces the correct stylesheets at run-time.

However, not everyone wants a run-time solution, some have static enough CSS they would rather build it once and forget.

So, as you saw in the example above, our aim is to inject tailwind's CSS into the component's stylesheet.

Getting to the solution below took quite some time over the past day or so, involved finding a few bugs and discovering new tools.

First of all, I did some googling and found:

This is a postcss plugin for dealing with "CSS in JS". Sounds promising!

But no, this is a plugin for converting between CSS objects (actual JS representations of CSS) and CSS strings. We don't want this, we want to transform CSS strings in-place.

The babel plugin extracted CSS from template literals, passed them through postcss and replaced the original. Exactly what we need!

A rollup plugin or two exist which do the same as "postcss-js": they transform to and from CSS objects.

Again, not what we want.

I then made my own rollup plugin, which extracted template literals the same as the babel plugin did and processed them with postcss.

This did work, but seemed like overkill and tied us into rollup. I didn't really want to have a solution which depends on another build tool being used.

Fun to make my own rollup plugin, though, so good experience.

Andrey (postcss maintainer) at this point recommended I use "postcss-jsx". I had seen this while googling previously but couldn't quite figure out from the docs how to get it working with my sources.

It sounded like the right way to go, though, so I tried again!

First try, I managed to get it processing the CSS from my element! Success. It resulted in a huge stylesheet (all of tailwind) but looked like it worked.

Not so fast, though. I tried this in a browser and was met with a good ol' syntax error. The first bug: postcss-jsx doesn't escape backticks in the output CSS.

Tailwind's CSS contains comments with backticks, so we end up producing syntactically incorrect code like this:

At this point, I noticed postcss-jsx is unmaintained and the folks at stylelint have forked it. So I filed the first bug in my investigation:

I fixed postcss-css-in-js locally to escape backticks, so I now got some output.

But this won't work for anyone else until the package is fixed, of course. So I figured we can get around it: use cssnano to strip comments entirely - making those backtick comments conveniently disappear.

Installed cssnano, added it to my postcss config, and used the "lite" preset as I only wanted empty rules and comments removing.

I almost forgot, postcss-css-in-js also had a 3rd bug: it produces an AST like this:

Turns out, postcss has trouble stringifying nested roots. Bug raised and even tried a PR this time:

After this excellent amount of fun finding bugs and researching solutions, I finally got to one which works.

To include tailwind's CSS, we do exactly as in their docs:

These @tailwind directives will later be replaced with tailwind's actual CSS by postcss.

As mentioned above, we needed the following:

Here, bundle.js is what we produced with esbuild earlier on. We want to purge unused styles from our bundle.

Note: cssnano can be used instead of the last 2 plugins but we didn't in this case because of bug 2 above

Our build script from before should now work:

If we want to strip all those unused styles and make use of the purge option in our config, we need to specify NODE_ENV:

Tailwind will pick this up and purge unused styles.

Enabling purging in both dev and prod

If you always want purging to happen, simply change your tailwind config to look like this:

This is described more here.

We can do a bit better than this. Right now, we are producing a tailwind stylesheet for each component.

If we have multiple components, each one's stylesheet will have a copy of the tailwind CSS the whole app used (as we're operating against the bundle, not individual files).

So we'd probably be better off having a single tailwind template many components share:

This means we will produce one monolithic tailwind stylesheet all of our components re-use.

In the example above, .p-6 and .p-4 (the classes used in the render methods) will both exist in the stylesheet with all other unused styles stripped.

Whether this is an optimisation or not does depend on your use case. Just remember the "purging" happens on the bundle, not the individual files.

If your styles are very static (i.e. you don't really dynamically use any at run-time) or you already have a similar postcss build process, you should probably process Tailwind at the same time.

The cssnano inclusion is a hack in my case, to get around bug 2 mentioned above. Though you probably want to use it anyway to save some bytes in production.

Once suspended, 43081j will not be able to comment or publish posts until their suspension is removed.

Once unsuspended, 43081j will be able to comment and publish posts again.

Once unpublished, all posts by 43081j will become hidden and only accessible to themselves.

If 43081j is not suspended, they can still re-publish their posts from their dashboard.