Many blockchain projects don't survive long after hitting the initial production state. For most, lack of proper software testing is one of the main reasons for their demise. It's estimated that over half a billion dollars worth of cryptocurrency has been lost due to bad code in the last year alone. You probably heard about The DAO's code loophole, which allowed attackers to drain out 3.6 million ETH (worth $70 million at the time) from the Ethereum-based smart contract. Another notorious case was the Parity bug which resulted in over $150 million permanently frozen. Even Bitcoin itself is not immune to hacks. Late last year, a bug discovered in the code allowed malicious individuals to artificially inflate Bitcoin's supply via double input. If the bug wasn't quickly identified and addressed, it could have had catastrophic effects on the network. This is just the tip of the iceberg - there are plenty of smaller incidents caused by inexperienced or inattentive developers that don't make the headlines.

What does this tell us? In development, things can go wrong fast and the outcome can be ugly. This is why software testing is so important for any project utilizing blockchain technology, such as blockchain platforms, blockchain applications or blockchain-based services.

In this article, we will discuss our experience and best practices with software testing while developing Lisk, a blockchain application platform. We will also show you how implementing automation testing improved our internal workflows and code reliability. Lastly, we will show you how you can get involved in testing our open source software.

This is a long blog post, but we've broken it down into bite-sized pieces for you.

You've probably heard about blockchain in the context of cryptocurrencies like Bitcoin, but what makes this new technology so special? The blockchain, which is a type of distributed ledger technology (DLT), is an open, distributed database that is able to record transactions among parties permanently and in an efficient, verifiable way. Those transactions are packed into blocks, cryptographically signed and form the actual chain. Data stored in blockchain can't be altered or tampered with, as all the records are immutable. Once data is saved into the ledger, it stays there forever. The blockchain is also a decentralized network, meaning there is no central authority with control over it.

It's easy to get excited about blockchain, but very difficult to actually develop a working product on top of it. Blockchain developers still seem to be a rare breed of programmers for various reasons, including the steep learning curve required. Lisk plans to tackle these problems head-on by making it easy for every developer to build and deploy blockchain applications in JavaScript. Lightcurve is a blockchain product development studio and consultancy based in Berlin, Germany. We're currently focused on developing all aspects of Lisk, including the product, marketing, community and design. 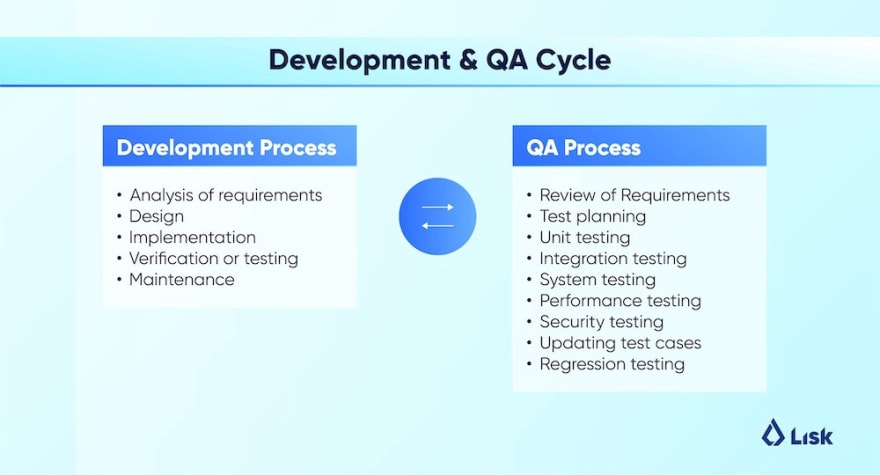 It's common in tech startups to face challenges in the first years getting processes in place and it's no different for us at Lightcurve. We didn't have enough resources to dedicate to software testing, but we still had to do as many tests as possible to ensure the quality and reliability of every new software release. For example, testing a bug fix or a feature on a private network level required:

The majority of our tests were initially manual and therefore time-consuming. In many cases, software testing also required coordination and significant help from our DevOps team. We were not able to test all the protocol features and scenarios in a reasonable amount of time as both the efforts and time required were pretty high. As a result, we experienced delays when making improvements and adding new features to our product suite. However, I am happy to confirm that we no longer depend solely on manual testing. Four months ago, we established our own QA team within our network development team to cover all the missing parts related to software testing, implementation processes, automation testing and enforcing high-quality standards.

How we implemented Quality Assurance at Lightcurve

Now that we've established different types of testing, let's have a look at how exactly QA is performed at Lightcurve and what exact processes we introduced to eliminate the risks of delivering unreliable code to production. 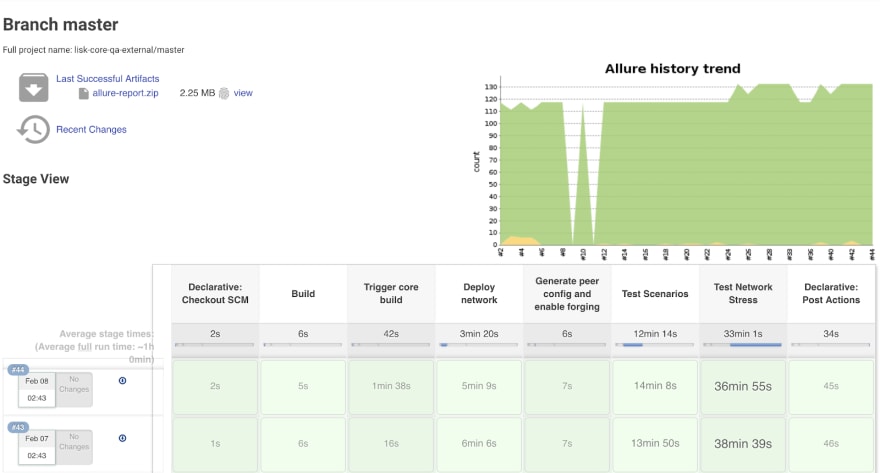 In blockchain, minor releases involve stages of testing before they reach the production network. In our case, we have the following types of networks:

Our automation testing is configured to enable our developers to run tests on Devnet or Alphanet. The actual network size is configurable, ranging from 10 to 500 nodes. NewRelic APM monitoring is integrated with our software and enabled for each node. Once all the required tests are executed and their results evaluated, a decision can be made to release a feature or fix to Testnet. After a reasonable amount of time (depends on the size and complexity of the release) we will push it to the production, otherwise known as Mainnet.

The pipeline is configured to run nightly, which allows the development team to create each release on time and with proper quality. As a result, developers can test features as and when they develop at a network level using the QA automated framework. This gives developers instant feedback if there are any failures, backward compatibility issues or performance changes, etc.

Get involved in our open source automation testing

Lisk is developed in the spirit of the open source ethos. Therefore, we would like to encourage all developers to participate in ensuring the continued quality and security of our open source network with our QA tools.

How to start contributing to our QA

Observe our quality assurance progress by following our public Jenkins interface. If you want to try using the test suite, however, you will you need to set up your node and network. To do so, read through Lisk's official documentation. You will especially need to follow the Lisk Core setup section to get the blockchain network up and running. Next, you can set up the QA tools by following the instructions in the Lisk Core QA repository.

Which QA tools can we offer you?

Now that you know how to set up your Lisk Core node, you can participate in the following:

If you are a developer and want to contribute to Lisk's Quality Assurance process, you can follow these contribution guidelines. You can then share your insights or join the discussion on Lisk.Chat's Network Channel.

From immutability to decentralization, blockchain's development presents its own set of challenges. This makes software testing even more important for our industry than it already is for centralized applications. To complicate things further, software testing in itself is a whole universe of options. The introduction of automation testing at Lightcurve along with a professionalized QA department, significantly improved our development speed, along with the quality of Lisk's codebase. When it comes to blockchains, however, community equals security. Use the above QA tools to get involved in the testing and contribute to our network's development starting today.

Web3: Should I use Infura / Alchemy or Run a Node?