This is episode #23 in a series examining modern CSS solutions to problems I've been solving over the last 13+ years of being a frontend developer. Visit ModernCSS.dev to view the whole series and additional resources.

When it comes to CSS, sometimes a border is not really a border.

In this episode, we'll cover the differences between:

We'll also discuss when you might use one over the other.

Refresher on the CSS Box Model

A key difference between our three border methods is where they are placed on an element and how they affect its dimensions. This behavior is controlled by the CSS box model. 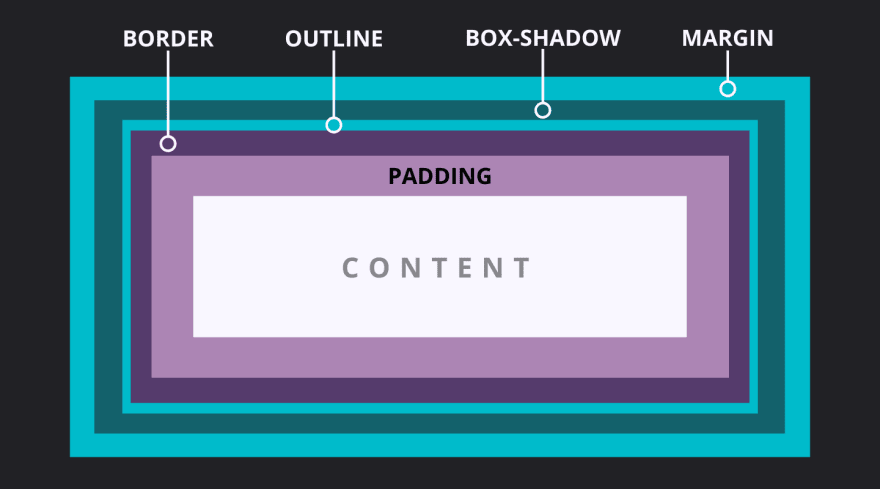 Borders have been a standard in design since the beginning of the web.

An important difference compared to the other two methods we're going to cover is that by default borders are included in the computed dimensions of an element. Even if you set box-sizing: border-box the borders still figure into the calculation.

The most essential syntax for a border defines it's width and style:

If not defined, the default color will be currentColor which means it will use the nearest definition for color in the cascade.

But there are more styles available for border, and using border-style you can define a different style for each side if you'd like.

When to Use border

Border is a solid choice (pun intended) for when it's acceptable for the style to be computed in the element's dimensions. And the default styles give a lot of design flexibility.

Keep reading for a bonus tip about something only border can do!

For outlines, the only required property to make it visible is to provide a style since the default is none:

Like border, it will gain color via currentColor and it's default width will be medium.

The typical application of outline is by native browser styles on :focus of interactive elements like links and buttons.

This particular application should be allowed to occur for purposes of accessibility unless you are able to provide a custom :focus style that meets the WCAG Success Criterion 2.4.7 Focus Visible.

For design purposes, an often noted issue with outline is that it is unable to inherit the curve from any border-radius styles.

When to Use outline

Use of outline may be desirable when you don't want to impact the element's dimensions, and you don't need it to follow a border-radius. It happens to use the same style values as border so you can achieve a similar look.

The minimal required properties for box shadow are values for the x and y axis and a color:

Optionally, add a third unit to create blur, and a fourth to add spread.

Check out my 4.5 minute video demo on egghead to learn more about the expanded syntax as well as tips on using box-shadow.

To use it to create a border, we set the x and y axis values as well as the blur to 0. Then set a positive number for spread:

This will create the appearance of a border around the element and it can even follow an applied border-radius:

When to Use box-shadow

You may prefer box-shadow particularly when you want to animate a border without causing layout shift. The next section will demonstrate an example of this context.

And since box-shadow can be layered, it's an all-around good tool to get to know to enhance your layouts.

However, it will not be able to fully mimic some of the styles provided by border and outline.

Here are a few practical scenarios where you may need to use a border alternative.

A common case of the real border becoming an issue is when providing styles for both bordered and non-bordered buttons, and the scenario of them lining up next to each other.

A typical solution is usually increasing the non-bordered button dimensions equal to the border-width.

An alternate solution with our new knowledge is to use box-shadow along with the inset keyword to place the pseudo border visually inside the button:

Note that your padding will have to be larger than the border-width to prevent overlap of the text content.

Alternatively, perhaps you want to add a border on :hover or :focus. Using the real border, you will have an undesirable visual jump from layout shift since the border will briefly increase the dimensions in those states.

In this case, we can use box-shadow to create the pseudo border so that the true dimensions are not increased - plus we can animate it using transition:

Here's the reduced code for the above example:

A classic CSS joke is that to figure out CSS issues particularly for overflow scrolling or positioning is to add:

Which will add a red border to every element.

But as we've learned, this will also affect their computed dimensions, thus potentially accidentally causing you additional issues.

Pop quiz: where will the outline be placed, and why is this a better solution?

One potential consequence of using border is adding scrollbars once content is re-drawn. This side-effect will not happen when using outline.

Additionally, you're likely to be using border for elements already, so universally changing the border will cause layout shifts which is certainly likely to introduce new problems.

Side note: Browser DevTools also have evolved more sophisticated methods of helping you identify elements, with Firefox even adding both a "scroll" and "overflow" tag that is helpful in the case of debugging for overflow. I encourage you to spend some time learning more about DevTool features!

For accessibility, one scenario you may not be aware of is users of Windows High Contrast Mode (WHCM).

In this mode, your provided colors are stripped away to a reduced high contrast palette. Not all CSS properties are allowed, including box-shadow.

One practical impact is that if you have removed outline upon :focus and replaced it with box-shadow, users of WHCM will no longer be given visible focus.

To remove this negative impact, you can apply a transparent outline on :focus:

For a bit more context on this specific issue, review the episode on button styling.

Pitfalls of outline and box-shadow

Because outline and box-shadow sit outside of the border in the box model, one consequence you may encounter is having them disappear under the edges of the viewport. So, you may need to add margin to the element or padding to the body as a countermeasure if you want it to remain visible.

Their placement also means they can be sheared off by properties such as overflow: hidden or the use of clip-path.

As promised, here's a bonus tip about something that - of the methods we've discussed - only border can do.

An often forgotten border-related property is border-image. The syntax can be a bit strange when trying to use it with actual images.

But it has a hidden power - it also allows you to create gradient borders since CSS gradients are technically images:

This requires defining a regular border width and style (although it will only display as solid regardless of style value), followed by the border-image property that can use the gradient syntax with one addition. The number after the gradient is the slice value which for our gradient we can simply use a value of 1 to essentially not alter the sizing/distortion of the gradient.

To place the border on only one side, be sure to set the other sides to zero first or some browsers will still add it to all sides:

The downside is that these borders do not respect border-radius, so if you need a solution that does, you can use Inspector to peek at how the gradients are added for the cards on the ModernCSS home page 😉