I use Gitlab a lot. I use it for personal projects and have also implemented it at work - I love the platform. Others are available, but for me, having everything in one place (though risky!) saves me having several tabs open.

I've previously covered what CI/CD is, and why it's great; but now I want to show some examples of it, working within Gitlab, so you too can create fancy looking deployment graphs as shown below.

It is worth noting that Gitlab do have their own pages for CI/CD, however some of the information on those pages is a little out of order, and will cause issues when you try and build pipelines. This .gitlab-ci.yml file referenced throughout this post is available on Gitlab.

Broken down simply, the labels at the top are the different stages, the individual nodes are tasks. Each node has a label, which is what the job is called. This was all built with the following YAML in my .gitlab-ci.yml file (available as v1.0):

Breaking down the file, the stages element is pretty self explanatory, these are the the names of the stages which appear on the top of the pipeline. You don't have to name them, and if you don't it won't provide any. You can call them anything you like, and even call them after emojis (though why you'd want to I don't know - but I don't use emojis): 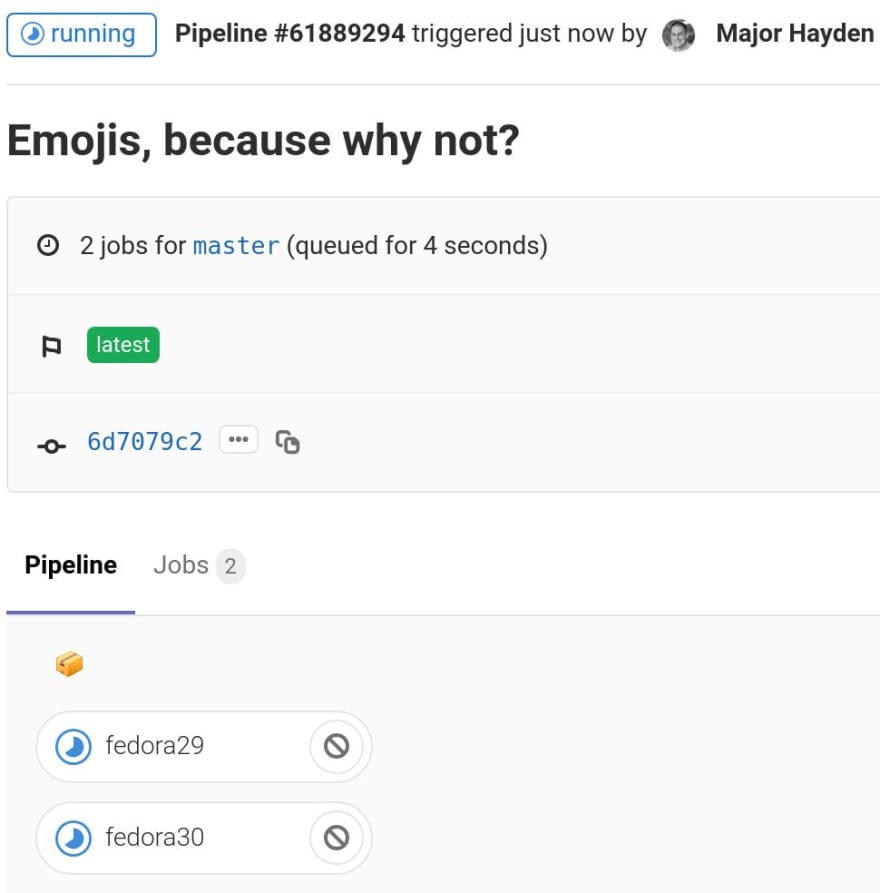 Since we're talking about emojis and @gitlab, remember that they work fine as stage names in your GitLab CI pipeline, too:

The image element is the Docker image you want to use to do the work. This can be set for each individual job, for example if you need to do integration testing on a Windows image and a Mac image for software. I've used a separate job image to do versioning (I'll come to that later).

Then we're into the jobs themselves, e.g.

The first line there is the name of the job. The stage identifies where it fits in the pipeline (this is optional, but advised if you have a number of jobs). The script element are the series of tasks the job needs to run. In this case, echos the line "Linting the code". That's it. Like I said, the job looks fancy; but I set this up to do nothing on purpose.

The intelligence for any CI/CD job comes from what each stage does, or needs to do, which I'll cover over the next few posts. But this gives an outline of the very basics of setting up a pipeline within Gitlab, and letting it run when the branches are committed.

This article was originally posted on my blog at https://www.garybell.co.uk/ci-cd-with-gitlab-getting-started/ on 12th June 2019

All you need to know about Terraform provisioners and why you should avoid them.

A software engineering analogy nobody asked for

Run your own Drone CI

Gary Bell
A Senior Developer working mostly with PHP and JavaScript, with a bit of Python thrown in for good measure, all on Linux. My tooling is simple, it's GitLab and JetBrains where possible.
Project Wikis - Share knowledge from the start
#gitlab
Using Keyboard Shortcuts in GitLab
#gitlab
Merge Request Templates
#gitlab