A month ago I got myself a ZSA Moonlander keyboard as a replacement for my aging Microsoft Natural 4000, and I wrote about my first few days with it.

Now that a month as past, I thought it might be a good idea to give an update on how I’ve been finding it, and what I’ve learnt, for anyone else who might be considering a similar keyboard journey.

First up, I need to make a correction from my pervious post. In it I said that the keyboard is an ortholinear layout, which was incorrect. The Moonlander is a Columnar layout, which is similar to ortholinear but with a slight difference. In an otherolinear layout the keys are in a strict grid, with no offset between the keys, as you can see in ZSA’s Planck EZ:

Colomnar is similar in that the keys are aligned in a series of vertical columns, each key is inline with the one directly above it, but the columns are vertically offset from each other to match the finger length of the finger that is meant to use that column. So the column for the middle finger goes up higher than any others, as it’s the longest finger and can stretch further up. without going down as far as say, a pinky.

With that correction sorted, what’s it like? I’ve been using staggered all my life, it’s what all stock keyboards are, it’s how virtually every third-party keyboard is created, so using something different is… interesting.

After about a week I found myself pretty much back up to speed on what would be a usual typing session, one that consisted of words not code, but I wasn’t really making any use of the columnar layout.

This results in a lot of lazy habits on the keyboard and not really getting the maximum value, reduced joint stress through simplified movement. For the last week I’ve started to undo that by doing daily typing lessons over at keybr.com.

If you want to try and feel dumb about typing, I’d highly recommend trying something like that out. I’m finding that I’m averaging low 20’s in my words-per-minute, sometimes peaking at 30, but that’s somewhat rare (and generally error prone).

So, has it been worth it so far? I think so. While I do feel like a fool a lot of the time when I’m typing, what I have noticed is that when I get into a typing rhythm and start really using the layout to it’s advantages (up/down finger movements rather than side to side) it feels really nice. Like, really nice. I’m not sure how to really describe it, but not having anything more than my fingers making some very minor movements makes the typing seem to flow a lot smoother.

What I have noticed though is that my left hand has picked this up a lot faster than my right hand. This may be because I’m left handed (but really only for writing, everything else I’ve trained myself to do right handed), but I’m really struggling to get my right hand to move beyond using only one or two fingers without a lot of thinking about it. Maybe after a few more weeks of typing practice that’ll change.

Somewhat of a side point, but very much related to learning to type is something I never considered, the impact my reading difficulties would have.

I’m someone who struggles to read, this is partially why I tend not to write notes when presenting, I can’t read them on the fly. It’s possible that I’ve got some form of dyslexia, but as I’ve never been diagnosed I don’t like to apply a label. What I know is that when I see letters and words, it’s often not in the order they are meant to be.

This makes for a challenge when it comes to relearning to type. Whether I’m using keybr or the typing training from ZSA, it’s a challenge because I need to read what’s on screen, process it correctly and then type it out exactly. But since I’ll often read it incorrectly, what I type might be what I read but wasn’t what was originally on screen. Because of this, I find writing, such as doing this blog, just as valuable, if not more, because I’m not trying to retype someone elses words, I’m bringing my own.

So if you’re looking to relearn how to type, take into consideration how you go about processing words to be able to type them back out.

I have found keybr.com both a positive and a negative as it doesn’t really use words, more collections of letters to learn patterns. As they aren’t words I don’t do as much “fill in the blanks” as I do on other typing practice, but also as they aren’t words I have trouble focusing on what I’m aiming to type. I’d suggest trying a few services to find what’s right for you.

One thing about this keyboard, like many smaller keyboards, is that they use layers to give you access to the keys you’re dropping.

This has taken a lot of work to get use to, and I find that it’s a large cognitive effort to use them effectively. I think this is also resulting in an increased usage of the mouse. I was someone who was very keyboard orientated for navigation around tools, but I’ve been using the mouse a bit more as I’ve trying to retrain the finger dance to get shortcuts to work.

If you look at the keyboard layout I’m using most of the symbol keys are across two layers, with layer 1 being common coding symbols and layer 2 being punctuation. In the first few days, I found myself moving keys around a fair bit, but after about a week I settled down and the only changes were to make some symbols more accessible to my left hand.

As a result, when doing coding, I do find that I have to think more about the dance my hands need to take before I take it. I don’t doubt that this will improve over time with practice, I already find some symbols easier to get without looking (such as the ones for markdown!) but for now coding is still a bit of a chore.

As this is a mechanical keyboard, I’ve delved into the wonderful world of “OMG why is this so complicated!” when it comes to how you want the keys to feel and sound. When I got the keyboard I had Kailh Gold switches in, which are super clacky to type on. After a few weeks (and the odd sideways death look from my wife 😝) I decided to move the letter keys over to the Cherry MX Brown switches. These are much quieter to type on, have more of a thunk than a high pitched clack when you type, and that’s probably better in an office/shared workspace.

But do I notice any difference? Sort of. I’ll admit that the Gold’s do feel a lot nicer to type on, they are super responsive and feel very fast as I type. That’s not to say that the Brown’s feel sluggish or anything, they are more than adequate to type on, they just don’t feel quite as nice.

Once we are no longer having to home school, COVID restrictions lift so my wife can work again and our new house is built (in which I’ve installed sound proofing in the office) I’ll probably switch back to the Gold’s for all keys. For the time being though, I have the clack only when I’m using a non-letter key (which does help a bit in learning which key is where, as I have audible feedback).

When I first started with the keyboard, here’s how I had it on the desk: 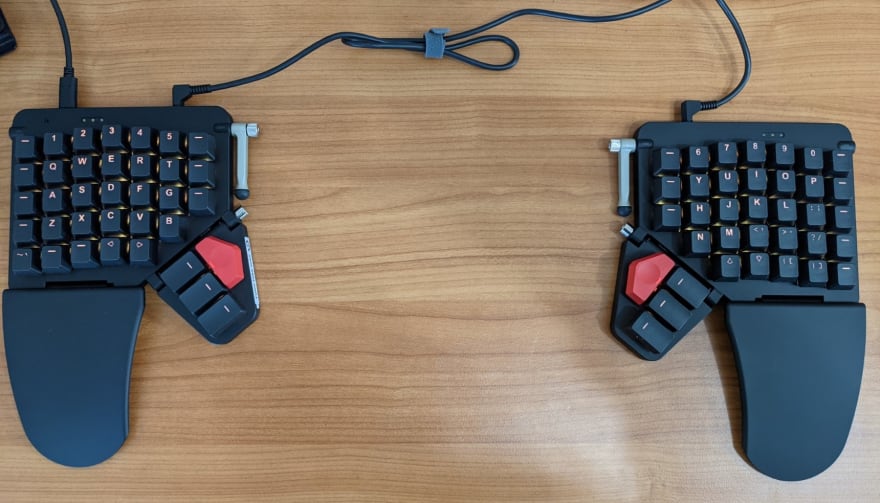 The position of the keyboard is much wider now, it’s about the full width of my shoulders, and it feels pretty comfortable at that width. This has also resulted it me using my chair arm rests less than I use to, which I didn’t expect. I’ve also lowered the height of my desk, even when I’m in standing position, as I haven’t found a need to bring my hands up as high.

There is a downside of this layout is that I can’t quite work out where to put my mouse. Previously, the mouse was sitting at about shoulder alignment of my right arm (I use the mouse right handed, even though I identify as as lefty), but now I have half a keyboard there, so the mouse ends up sitting either between the two halves, or way off to the right. I’m still not sure how to do this better (and I can’t get use to the keyboard-driven mouse control…), so we’ll see what happens to the mouse long-term.

One month in, typing is not back to where it once was, but I’m still happy with the keyboard.

I’m enjoying the wider set of my hands and I’m feeling better through my back and shoulders as a result. I also feel like I have a better posture while typing (I still slouch massively when I’m not typing 🤫), which I wasn’t really expecting.

My plan is to keep going with typing lessons for a while to try and get better at using the Columnar layout and reduce the overall hand movement while typing, instead just using finger movements. I’ve already noticed how much better that feels on my left hand, so my hope is that I can get my right hand to follow suite.

I get that this isn’t for everyone, but if you are someone who has wrist or shoulder pain, consider the role that your keyboard may be playing in that and look into something like the Moonlander as an option.