In a robotics project, simulation is an important aspect that serves multiple purposes. First, you can test the behavioral code that you want your robot to execute. Second, you can use the simulation to test different types of hardware, for example distance sensors, cameras or 3D point cloud sensors to see which works best. Third, the same software that visualizes a simulation can be used in real time, with a real robot, to see the environment while its being scanned and navigated by the robot.

In my robot project, I started with ROS1 and provided a basic robot model that can be visualized with RVIZ. Then, I build a first practical prototype, entirely Arduino-based with no ROS involved. In the current phase of the project, I work on building a Gazebo compatible model with visual sensors.

This article continues the series with a jumpstart into ROS2 simulation with Gazebo. We will get to know the essential tools for creating a simulation - ROS launch files and Gazebo - and learn to apply the essential steps - choosing 3D models, placing them in the world.

The technical context for this article is Ubuntu 20.04, ROS2 Foxy, Gazebo11, but it should work with newer versions too.

This article originally appeared at my blog admantium.com.

This paragraph shortly lists all the terminology that is essential to understand the physical simulation aspects. Skip this section if you are firm with the vocabulary. 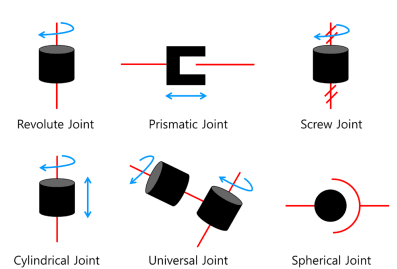 Step by Step: How to Create a Simulation World

Gazebo was started outside of ROS, but became fully integrated. It focuses more on the complete physical simulation of a robot and a world. Particularly, the world provides correct physical simulation through a physics engine: The robot can bump into objects, which will move and eventually even crash on your robot. Gazebo comes with predefined world models, and you can even define your own model.

In this tutorial, we will launch a Gazebo simulation with an empty world, and then spawn a robot inside. In a nutshell, the essential steps are:

Each following section details these tasks.

We will create a package structure that looks as follows:

The room.world file is an SDF file that will contain <model> tags of everything we want to simulate: Objects like walls, windows, and furniture. We will start with a simple empty world and new objects add step-by-step.

You can load this file into Gazebo manually. But since we will ultimately also spawn a robot in this model, its best to continue with the launch file straight ahead.

As we learned in the last article, ROS2 does not support XML launch files anymore, and instead Python files are used.

The launch file that we use wraps the launch command from the gazebo_ros package, and provide a world argument.

In order to use our URDF model from RViz in Gazebo, we need to make several changes to the model.

First of all, we need to provide additional physical aspects to the robot so that it behaves correctly in a simulation. Second, the visual appearance of the robot differs. The color and text definition of an RVIZ model is not applicable. If you use meshes, they need to be changed as well. Third, we also need additional plugins so that the Gazebo tool works properly

The inertia of an object is the counterforce that it applies when its current motion is influenced by another object. In Gazebo models, the <inertial> tag is used to represent this aspect.

The <origin> tag positions the link with respect to its parent link, here you would change the xyz values to move the estimated mass center. With <mass> you specify this links mass in kg. Finally, the <inertial> element is a matrix of how forces on x, y, and z are affecting the link. You can read the physics article on wikipedia, or use this handy python script.

Another set of variables governs the friction of links in your robot. You express this with four values. First, <kp> and <kd> provide the static and dynamic contact stiffness. Here, we use the values 100000 and 1.0, which is the default value used in many ROS projects. Second, the values <mu1> and <mu2> are the static and dynamic friction coefficients, which you can lookup on wikipedia based on the material of the link.

This defines the hard material boundaries of your robot - it affects how gravity and other forces are applied to your robot in the simulation. These properties are expressed with the <collision> tag inside the links. Its properties are very simply: Just copy the original links' <geometry> and <origin> values as follows.

The joints in your robot should be further modeled to express their real-world behavior.

To change the visuals of your robot, you have these options:

This works the same as in RViz: Inside your links <visual> tags, you can reference a <color> element.

Gazebo provides a set of build-in meshes that are listed in this source code file. Apply them be adding an <material> tags inside the <gazebo> tag as follows.

When you use custom meshes to represent your links, simple reference them in the <geometry> tag of your link as follows:

Important: It is recommended to not use custom mesh files in the <collision> tags since this will affect the simulation performance. Instead, define the values based on the available <geometry> types of boxes, cylinder and sphere.

Step 5: Parametrize the Robots URDF Model for Running with Gazebo or RViz

As you see, the required changes are fundamental. And they are not backwards compatible: All the changes required for Gazebo cannot be parsed by RVIZ.

For these reasons, complex robot projects separate the URDF aspects into different XACRO files. After some experimentation, I came up with the following hierarchy.

Let’s see how this approach works in practice. When running Xacro to render a model, the command xacro rviz.xacro -o radu_rviz_compiled.urdf will be used. This file will...

Import the other required files

Define the essential parameters that control the macro execution

Execute the macros to create the URDF model

After working with this approach for some time, I realized that the core logic of handling the variability is inside the core.xacro file: The macros for rendering links and joints have different blocks that will be triggered by the master file. See the following definition of a <link>. In line 3, an <xacro:if> condition is evaluated to add RViz-specific visuals. And in Line 14, another condition checks and applies the gazebo physical properties to the model.

The Gazebo node is started with a launch file, but the robot needs to be spawn into the node. Thanks to the blog article how to spawn robots in ROS2, I created the following launch file.

The launch file can also transform the Xacro files during startup, as shown in the diff_bot example. For example, to load the Gazebo configuration, you need to execute this:

First, we build the current workspace.

Then we launch Gazebo.

And then spawn the robot.

Finally, the robot is rendered:

This article showed you how to create a Gazebo compatible simulation in ROS2 from scratch. It turned out to be lengthy process in which you need to (1) create a package, (2) create the world file, (3) create the launch file, (4) add Gazebo specific tags to our robot model, (5) parametrize your robot model to be compatible with Gazebo and RVIZ, and (6) spawn the robot entity in the simulation. Form all these steps. adding the Gazebo physics was time-intensive to learn and apply, and I hope you gained valuable insights as well. At the end, we can spawn RADU in Gazebo and RViz with a custom launch script file. And from here, we can move the robot around in its simulation.

Celebrate Black History Month by Donating to These 10 Organizations!