Have you ever asked yourself some of these questions:

If yes, you might find this article a little helpful for your future endeavors.

For some of you, regex might be a mighty beast too difficult to conquer, for a few of the experts out there, my salute to you for mastering the regex magic.

I myself am pretty average in areas of regex, but I know enough to make some of my tasks easy.

I'll start with some regex basics, then move to some common patterns, and then discuss using the newfound regex knowledge (i.e. the topic, speed up code editing).

Regex (or sometimes RegExp - as in JS), is a sequence of characters that specifies a search pattern.

Perl was one of the modern languages to provide inbuilt support of regex (as Perl was used for text processing, regex support was a necessity), and many of today's tools and languages (including JS and grep) use Perl inspired regex engines.

You can learn more here Regexone

This is simple, should be a hexadecimal string of format RRGGBB.

Let's add another condition, in my country, the number starts with 6,7,8,9, then random 9 digits.

I use the RegExr playground to test my Regex.

Find and replace in JS

In JS RegExp, we can have something called capture groups, with which we can group parts of our regex and use them in string manipulation using regex.

A simple example, in the string aabbcc, replace all c with a

Here /g is a modifier for global search in regex. Other modifiers are /i (case insensitive search), /m, for multiline search.

Let's say you have a typo in your code, and you named your type as ButonProps. And you want to replace it with ButtonProps.
Simple Find and replace in VSCode lets you do that.

Just put the required strings in each input box

Now let's say you want to find all the occurrences of ButtonProps import. The syntax will look something like this

But it can be something more complex:

Now comes our time to use regex in VSCode.

The little button .* in the search input box is the regex button toggler.
With regex on, we can now use regex in VSCode search.

So now let's search, and create our regex.
We will first start simple, and then narrow down our search by adding more regex symbols.
Our import statement looks like

so our regex will be (replace something with .*
import .*ButtonProps.*from '.*Button'; 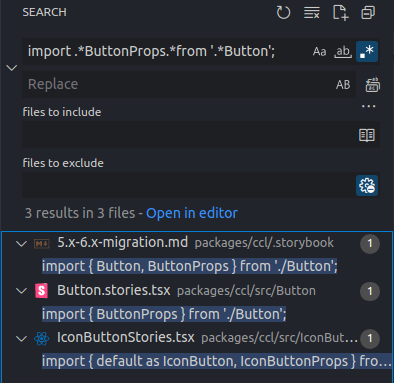 But there is some noise, we are also getting IconButtonProps. Let's remove that.
What we don't want is ButtonProps to be prefixed by any alphabets.
import .*[^a-zA-Z]ButtonProps.*from '.*Button';

Now our search is only showing ButtonProps without any noise.

Now let's say you want to rename the Button component to Btn.
We will need to replace these three occurrences:

Here the () are capture groups that we will access using $1, $2 respectively.

This is what VSCode will show you: 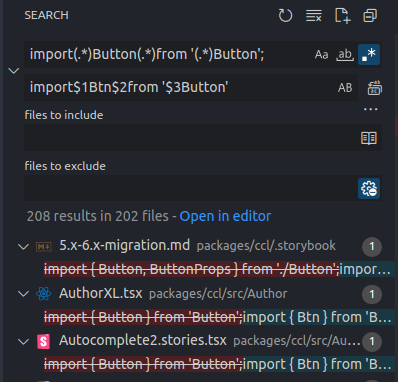 And your button imports are now renamed.

Find <Button that does not have trailing alphabets (to omit something like <ButtonGroup and maybe have a trailing newline. then replace all of them with <Btn$1 i.e. using $1, replace space with space, newline with a newline.

This one should not be that much in your code, and you can directly search for Button now.
Find - Button[^']

But what is [^'] for? To exclude all the occurrences of import.*from 'Button';.

With this, all our occurrences of Button are now Btn. And we now understand Regex a little better and use it to make our work easy.

In the future, I'll also try to write some articles highlighting more use-cases of regex to make your life easier. 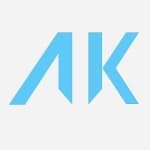 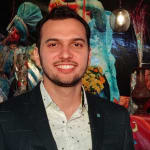 Once suspended, admitkard will not be able to comment or publish posts until their suspension is removed.

Once unsuspended, admitkard will be able to comment and publish posts again.

Once unpublished, all posts by admitkard will become hidden and only accessible to themselves.

If admitkard is not suspended, they can still re-publish their posts from their dashboard.

Once unpublished, this post will become invisible to the public and only accessible to Piyush Kumar Baliyan.

Thanks for keeping DEV Community 👩‍💻👨‍💻 safe. Here is what you can do to flag admitkard:

Unflagging admitkard will restore default visibility to their posts.