Imposter syndrome is a form of anxiety and can take up valuable space in our brains. In the same way that kids who get upset about a lower math test score than they were capable of, developers who suffer from imposter syndrome are less productive. It’s a bottleneck in their productivity and has become a significant issue in the web developer community.

Gemma Varty, a developer specializing in Cognitive Science and studying at Queen's University for Computer Science, realized that especially for a woman breaking into this industry, it’s a real issue.I’ll share with you what Gemma describes as the imposter syndrome phenomenon, why it can become a bottleneck in your productivity, and how to overcome it.

What is Imposter Syndrome?

In web development, often, new techniques or strategies arise, and new features or methodologies get created. Web developers must keep up with the demand, all while trying to evaluate what makes sense in their current projects but also become agile enough to keep up with their workload. Just that alone can give you an idea of how overwhelmed they may feel, and the vast amount of knowledge required to be considered a “competent developer.” 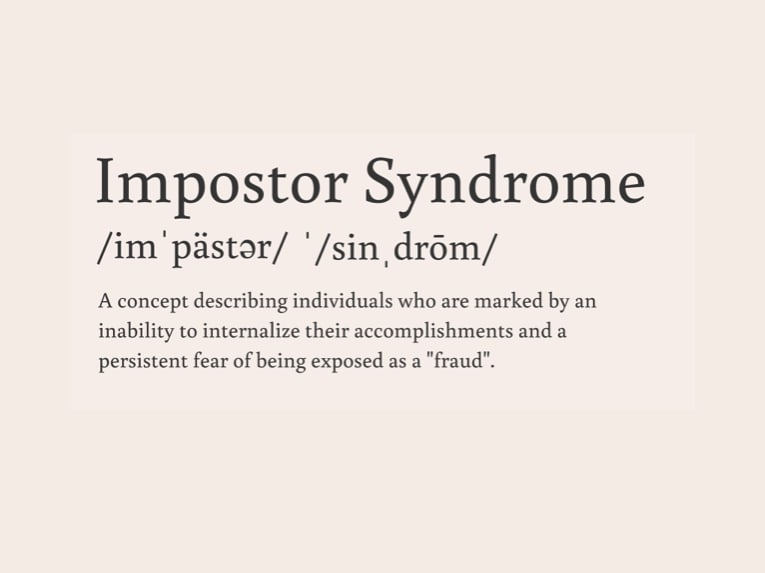 Gemma began with defining imposter syndrome as "individuals who are marked by an inability to internalize their accomplishments and a persistent fear of being exposed as a fraud." She added, “at the root of this concept lies anxiety, perfectionism, self-doubt and the fear of failure. Studies has shown that almost 70% of people have shown symptoms of imposter syndrome. Which I honestly think is a little low, I think we all have experienced some form of even self-doubt at some point in our lives. But that means almost everyone in every profession, every walk of life, has felt like this.”

Why Imposter Syndrome Can be a Bottleneck to Your Productivity

Most of us have experienced some form of imposter syndrome in our lives, even that super successful CEO who you look up to. You become so fixated on the fact that you feel completely under-qualified for an assignment when really, you have already written down the answer, but keep doubting yourself. It happens to the best of us, but remember, you're not alone.

“For one, it is a huge time waster. I wasted hours and days having this barrier in front of me. Those were hours I could have been productive. I didn’t do that well on an assignment. I missed bugs, my comments were non-existent, and my program wasn’t exactly what the assignment was looking for, but I was on the right track. With maybe a day, or even a few hours more, I could’ve handed in something that was at the level I should be able to achieve. Imposter syndrome gets in the way of us being able to achieve what we are capable of.” 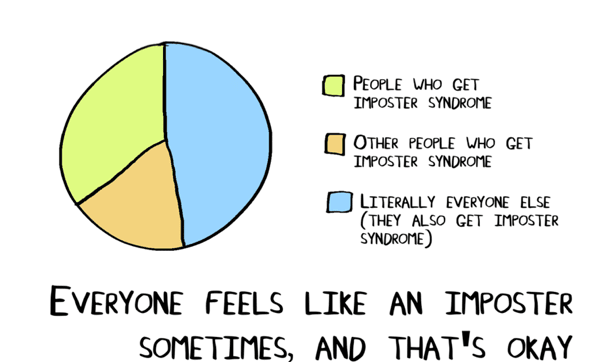 In Gemma’s first few weeks at Queen’s University, she was curious to find out if any of the students there were affected by imposter syndrome. As an example, Gemma explained that a friend of hers who was in his second year of computer engineering said, “sometimes I find myself avoiding projects or tasks because I’m “not qualified enough,” even though I’ve done something exactly like it before...it’s a fear of not filling my own shoes.”

Gemma said she "was shocked to hear everyone's stories, because no matter how confident, successful, or qualified someone may seem; we truly don't know what insecurities they are hiding. I was also relieved to hear people who I deemed as more confident, successful and qualified had experienced feelings that were almost identical to mine. It allowed me to recognize that maybe I am not the outlier here. I'm not a special case.

It was after I was able to recognize that I wasn’t alone in this that I began to really think, “Ok, maybe my accomplishments and where I am today are a direct cause of what I did and not just luck. Maybe I do have an idea of what I am doing and I'm not just fooling everyone.”

How to Overcome Imposter Syndrome

Talking back to that negative voice in your head is going to begin with changing your mindset, and the goal is to change your mind-set to think like a non-imposter.

Gemma spoke about Dr. Valerie Young, an internationally recognized expert on imposter syndrome.Dr. Young wrote a book on “The Secret Thoughts of Successful Women.”  In the book, Dr. Young uncovered the often surprising reasons why so many accomplished women feel as though they are “faking it” – impostors in their own lives and careers. 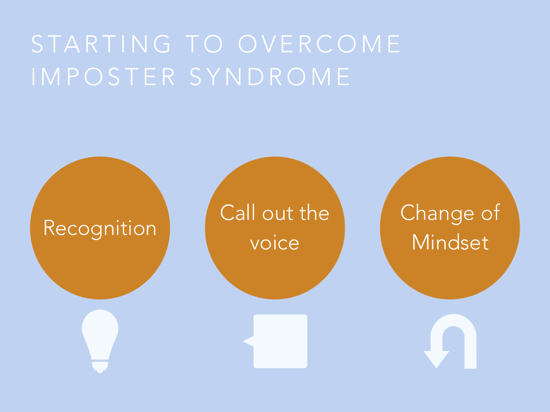 Gemma's gives advice on how to overcome the voice in your head and how to think like a non-imposter instead. “The first step that I found to overcoming imposter syndrome is simply to recognize that it exists in your mind. That you feel like a fraud. And I would agree that this is something challenging to do, especially out loud and to your superiors. Despite this difficulty, in my experience, this is the most reassuring way to know we are not alone; you are not the only one feeling this way. And according to statistics, they will most likely agree with you.

This recognition can kickstart your ability to start calling out that voice in your head, the one poking you saying, "You've been lucky," "You don't belong here," "You are fooling everyone." Become a self-researcher. Start to notice that voice in your head. Maybe even start to talk back to it. Personally, the next time I get positive feedback about something I feel I don't deserve credit for, I'm going to try to say to myself, that compliment was genuine and meant for MY work, I did.

That conversation in our head is the thing that has to be reframed to think like a non-imposter. Remember why you deserve to be there, the hard work, the perseverance and all the accomplishments that without your work, would not exist. All these things, I believe, make us qualified enough for credit.

Over time, believing those thoughts will become easier even if we do not believe them at all initially, we can stop trying to overcome imposter syndrome, and instead talk ourselves into the mindset that allows us to believe we belong where we are and why we are deserving of the credit we get. Giving us more time and more brain capacity to achieve things that are beyond what we thought we were capable of.

Who knows, maybe that hour your spend sitting at your desk questioning how you got to be there and terrified that someone is going to find out your secret, could be the hour that you came up with the idea that will bring your company from point A to point B, or having that conversation with the person who is going to connect you to the biggest break in your career.”

Most people experience moments of doubt, and that’s normal. The important part is not to let that doubt control your actions. Get involved. Make connections. Share experiences and immerse yourself in a community, because it exists for you! Pushing yourself through impostor syndrome is not easy, but I can promise that being open and discussing your struggles will help you. Pushing past that uncomfortable feeling and forcing ourselves into new, uncharted territory allows us to open ourselves up to new experiences and that’s when awesome stuff happens!

“It's not what you are that holds you back, it’s what you think you are not” —Denis Waitley

Agility CMS
Never rebuild your website from scratch ever again.

Welcome to the last CMS you'll ever need.

Once suspended, agilitycms will not be able to comment or publish posts until their suspension is removed.

Once unsuspended, agilitycms will be able to comment and publish posts again.

Once unpublished, all posts by agilitycms will become hidden and only accessible to themselves.

If agilitycms is not suspended, they can still re-publish their posts from their dashboard.

Once unpublished, this post will become invisible to the public and only accessible to Joel Varty.

Thanks for keeping DEV Community 👩‍💻👨‍💻 safe. Here is what you can do to flag agilitycms:

Unflagging agilitycms will restore default visibility to their posts.