I expected regular expressions to crop up again in my upper-level computer science coursework — maybe by then I’d finally feel ready to tackle them — but I encountered them in an introductory class that I had put off until my senior year. The purpose of this course was to draw students who had never written a line of code into CS by introducing them to concepts like cryptography, human-computer interaction, machine learning — you know, only the latest and greatest of tech buzzwords.

I didn’t attend more than a handful of lectures, but one of the assignments stuck with me. I had to write an essay about a famous computer scientist or academic whose work impacted computer science. I chose Noam Chomsky.

A Computer Scientist By Accident

Wikipedia christens Noam Chomsky as a linguist, philosopher, cognitive scientist, historian, social critic, and political activist, but not as a computer scientist. Because he is so highly regarded in all of these fields, his indirect contributions to the field of computer science often fall by the wayside.

The more I researched Chomsky’s academic work, the more accidental Chomsky’s foray into computing seemed. This affirmed my belief that all fields — even those that appear disparate from computer science — have something to offer to computing and the tech industry.

His contributions to the field of linguistics in particular exemplify the impact of interdisciplinary research on computer science. The Chomsky hierarchy transformed the code that computer scientists, software engineers, and hobbyists write today.

I briefly mentioned that formal grammars are syntactic rules: rules that give all possible valid phrases for a given formal language. Grammars provide the rules that build languages. In linguist-speak, a language’s formal grammar provides a framework with which nonterminals (input or intermediate string values) can be converted into terminals (output string values).

To elucidate this new vocabulary, I’ll walk through an example of converting a set of nonterminals into terminals using a made-up formal grammar. Let’s say that our pretend formal language, Parseltongue, has the following formal grammar:

To re-emphasize something I stated earlier: formal grammars generate formal languages. That means that, by creating a hierarchy of formal grammars, Chomsky also categorized languages themselves.

With that sobering introduction, let’s look at the four formal grammars in Chomsky’s hierarchy. From most to least strict, they are:

What is this “state knowledge” that I speak of? Think of knowledge in terms of scope. Regular grammars, for example, have no knowledge of the string’s past states in their "scope" in the process of converting an input string into an output string. This suggests that once the grammar makes an individual conversion of nonterminal to terminal (plus a series of zero or more nonterminals), the grammar “forgets” the previous state of the string.

On the other hand, unrestricted grammars hold onto every possible state of the string-in-translation. Context-free and context-sensitive grammars fall somewhere in the middle. 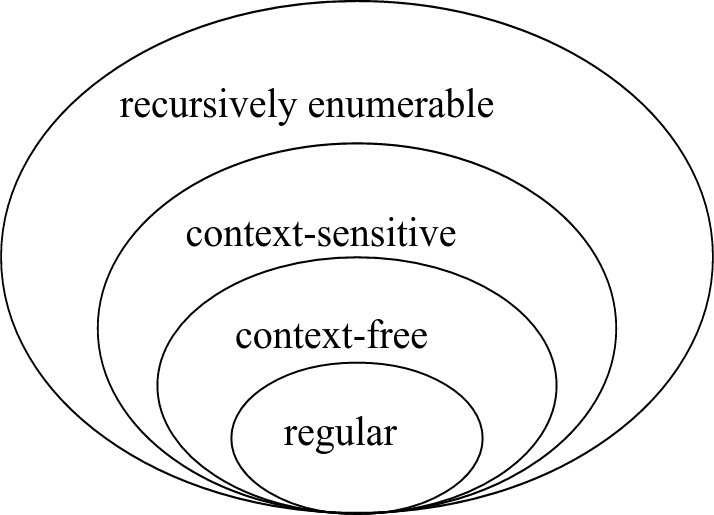 If you’re looking for a more detailed explanation of the grammars in the Chomsky hierarchy, you’ll have to take a peek at automata theory. I’ll focus on the grammar that brings us back to regular expressions, fittingly called the regular grammar.

On the Regular Expressions

Regular expressions and regular grammars are equivalent. They communicate the same set of syntactic rules, albeit using different formalisms, and both produce the same regular languages.

In linguistics, a regular expression is recursively defined as follows:

A regular grammar is composed of rules like those of Parseltongue. Just as a regular grammar can be utilized to parse an input string into an output string, a regular expression converts strings quite similarly. You can see examples of this parsing for the alternation, concatenation, and repetition operations — or, to use my prior analogy, rules — that regular expressions adopt.

Let’s return to our friend Noam Chomsky for a moment. According to his hierarchy of grammars, regular grammars retain no information about intermediate steps in converting from an input string to an output string. What does this tell us about regular expressions?

The “forgetfulness” of regular grammars implies that translations in one part of the string do not impact how the other nonterminals in the string are translated in future steps. There is no coordination between different parts of the string in the creation of the output string.

Looking at the linguistics behind regular grammars gives us insight into why programmers first brought regular expressions into code. Although I’ve only discussed formal grammars as generators and recognizers of language, the fact that regular grammars convert input string to output string piece by piece makes them pattern-matchers. In programming, regular expressions use production rules to convert an input string — a pattern — into a regular language — a set of strings that match that pattern.

Regexes, on the other hand, are utilized by everyday programmers who want to search for strings that match a given pattern. While regular expressions are theoretical, regexes are pragmatic. Programming languages are formal languages: languages designed by people (here, programmers) for specific purposes. As you might imagine, programming language creators augmented the functionality of regexes in code. Let’s examine these enhancements.

For example, using POSIX regex syntax, the pattern .ork matches all four-character strings that end with the three characters “ork.” That period is more powerful than simple alternation, concatenation, and repetition, right?

So far, I’ve portrayed regexes as regular expressions with amazing shortcuts and clear-cut use cases. However, as you may recall from Chomsky’s hierarchy, regular grammars have the strictest rules and no scope. Luckily, regexes have a little more leeway than their linguistic precursor, thereby bestowing them with more practical power.

For regexes, it’s a different story. Regexes violate this key regular grammar characteristic by supporting the ability to backreference. Backreferencing allows the programmer to parenthetically separate a subsection of a regular expression and refer to it using a metacharacter. To give an example, the pattern (la)\1 matches “lala” by employing the \1 metacharacter to repeat the search for “la.”

Because different parts of the string cannot influence one another in regular expressions, backreferencing gives regexes a lot more power than their predecessor. More importantly, backreferencing facilitates practical uses of regex such as searching for typos in which the same word was accidentally typed twice in a row. Pragmatism gives insight into why regular expressions were tweaked to create regexes in programming.

Another feature that increases the functionality of regex is the ability to alter the greediness of the matching. Different quantifiers — categories of regex patterns — can look similar but match drastically different parts of a string. A greedy quantifier (*) will attempt to match as much of the string as possible, whereas a reluctant quantifier (?) will try to match the minimum amount of characters in the string. Given the string “abcorgi,” the pattern .*corgi would match the entire string but the pattern .?corgi would only match “bcorgi.”

A possessive quantifier (+) also attempts to match as much of the string as possible, but, unlike the greedy quantifier, it will not backtrack to previous characters in the string in order to find the largest possible match. Given the string “abcorgi,” the patterns .*corgi and .+corgi would match the entire string. Though possessive and greedy qualifiers will often produce the same result, possessive qualifiers tend to be more efficient because they avoid backtracking.

Because quantifiers are metacharacters, they can technically be built from alternation, concatenation, and repetition: the three operations of regular expressions. However, quantifiers create a simple abstraction that allows programmers to quickly specify what type of match they would like.

Although I trace the history of regular expressions from Chomsky to modern programming languages, this blog post is not the end of the regex story. If you’d like to learn more about linguistic and computational regular expressions, I have some motivating questions for you.

I also have a list of resources that I used to study up on the linguistic and computational elements of regular expressions. Happy regex-ing!

Enjoy what you read? Spread the love by liking and sharing this piece. Have thoughts or questions? Reach out to me on Twitter or in the comments below. This post was originally published on Medium. Cover image credits belong to xkcd.

Time to start learning how to regex

Parse Name and Address: Regex vs NER, with Code Examples

Alaina Kafkes
Wordsmith & online-world-smith. Engineer. Alumna @NorthwesternU. I like long runs, literature, languages, and lemons.
How do you prepare for standup meetings?
#discuss #career #productivity
Navigating a new code base
#discuss #career #codenewbie
Why Microsoft and How I achieved my Goal
#webdev #career