If you've found this article useful, consider buying me a cup of coffee.

In this article we'll create a Discord bot using Python. The bot we'll be creating today will have a simple purpose, telling jokes. We will give the bot a command and it will return a random joke. This should be simple enough, let's get started!

A great metaphor I came across (don't remember the original source) was thinking of an API as a waiter at a restaurant.

Great! Now that we know what an API is and have a general understanding of how it works, we can now move on to using one.

To actually get the jokes, we'll have to use the Official Joke API. This API is extremely easy to use, you just use this link and every time you call it, it will return a random joke in JSON format. Simple!

To create a Discord bot and invite it into your own Discord server, you can follow these steps here.

You can name it whatever you'd like but I'll just name it "Jokes-Bot." 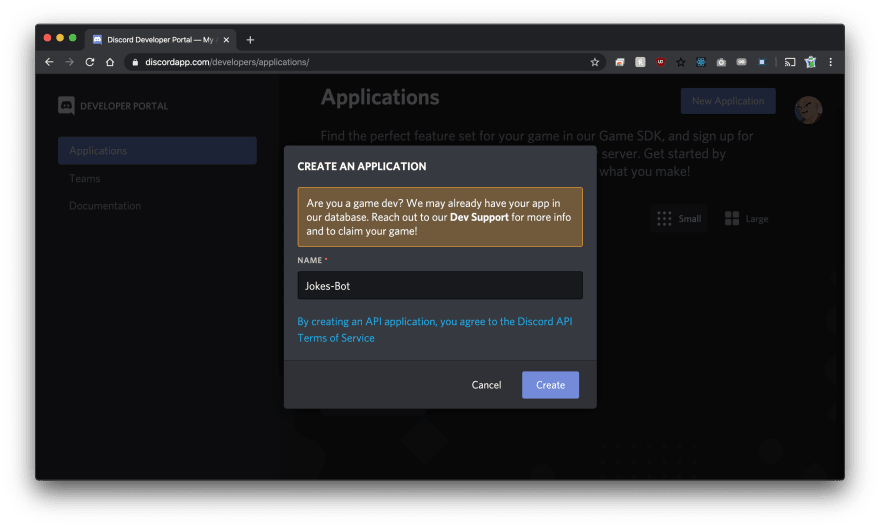 Also, under the Settings tab to the left, go to "OAuth2" > "Scopes" and tick the bot option. Then in the same page, go to "Bot Permissions" and tick the Administrator box. 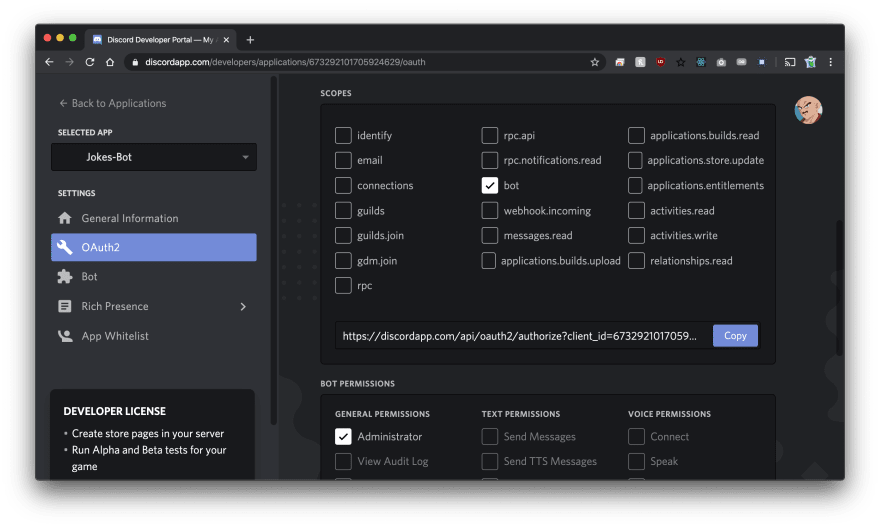 Now copy the link from the "Scopes" section and paste it onto your browser to add the bot to your Discord server. 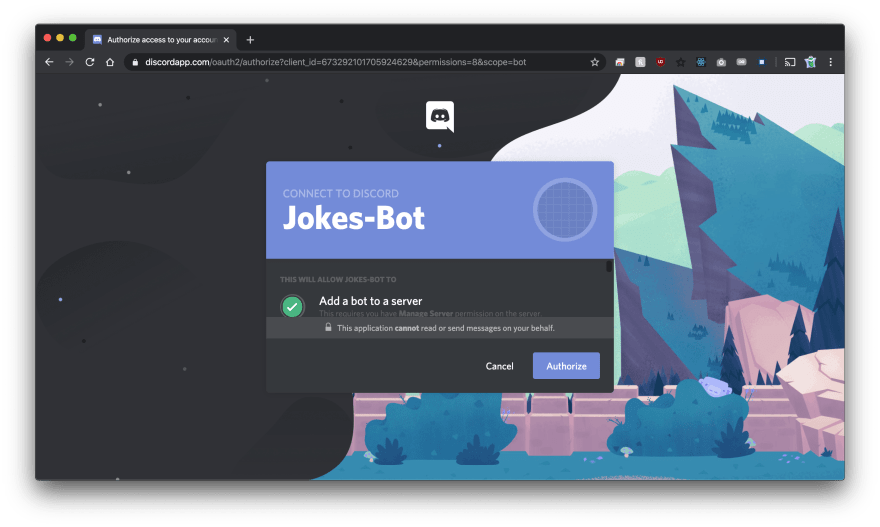 Cool! Now just take a note of the Discord bot token in the "Bot" tab because we'll be needing it later.

We'll be using the Discord.py library to create our Discord bot.

To install this library onto your machine you can follow these steps, or simply run the following command on the command line.

If you don't already have Python and pip installed you can go here to install them.

Simply type in the following command onto the command line to install this module.

Now it's finally the time you've all been waiting for, the code.

To test that our bot actually works, copy and paste the following code into your favorite text editor.

To learn more about what this code does go here.

Now insert your Discord bot token into the last line where it says "your token here." Save your python file as "discord_joke_bot.py" and then input the following command onto the terminal to run and test your bot.

If all went well you should see something like the following: 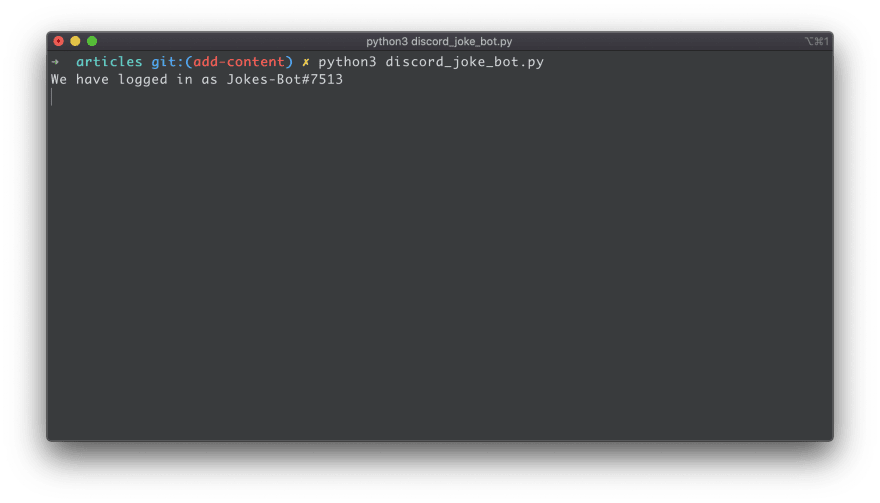 Now we can type the following command $hello into our Discord server and the bot should respond back with "Hello!" 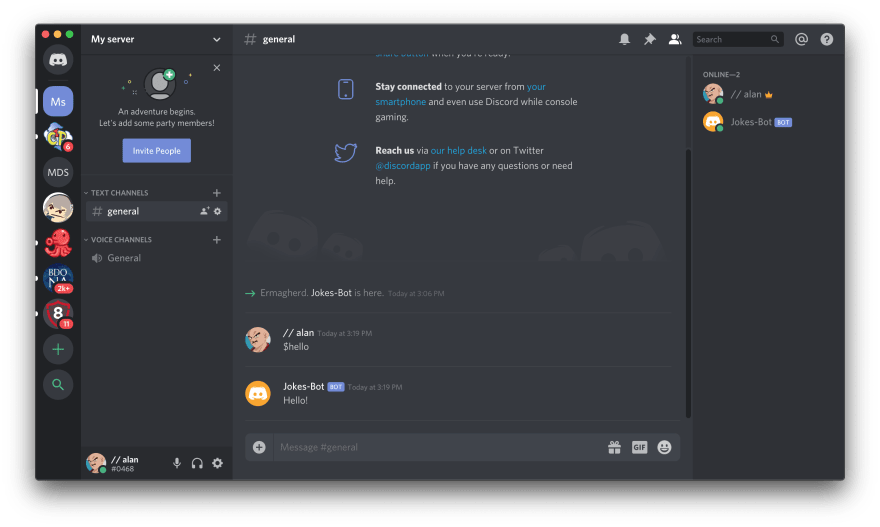 Cool so the bot works.

Also, whenever we make changes to the bot, you'll have to restart the python script by running it again.

Now let's take a look at how to actually make API requests with Python and the Requests module.

The following code is what we'll be using to make requests to the Joke API.

On line 1 we import the Requests module.

Line 3 is the URL we'll be using and I just defined it in the global scope.

Now on line 6, I define a function named "check_valid_status_code" that will check if the status code from the API is successful or not.

If the status code is equal to 200, meaning it's a successful call, it will return back the request in JSON format. If it's unsuccessful, it will just return false.

Most of the time, whenever you make an API call, the API will return a status code. These status codes tell you whether an API call was successful or not. To learn more about status codes check out this article.

Now on line 13 I define another function named "get_joke." This function, as implied by its name will get a joke.

First it makes a GET request to the URL we pass it. Then it will call "check_valid_response_code" and store whatever it returns into a variable named "data." Finally it returns the variable "data."

We can finally move on to actually adding in our "$joke" command.

First let's import "joke_api.py" into the "discord_joke_bot.py" file with the following line:

Now, in the file named "discord_joke_bot.py," we can simply replace the if statement containing the "$hello" parameter on line 16 with the following if statement.

So first on line 1, we check if the message we type into Discord starts with the "$joke" string.

Then on line 2 we call "get_joke" function from the "joke_api.py" file and save it into a variable named "joke."

The variable "joke" stores a dictionary with the following keys: id, type, setup, and punchline.

The only dictionary keys we are interested in are "setup" and "punchline."

Now on line 4 we check if the variable "joke" is "False." If so we just return an error message.

Else, if it's not false we return the joke setup with "joke['setup']" adding a newline character, '\n' and then adding the joke punchline with "joke['punchline']."

Now if we test this in our Discord server with our bot we should receive a joke from our bot. 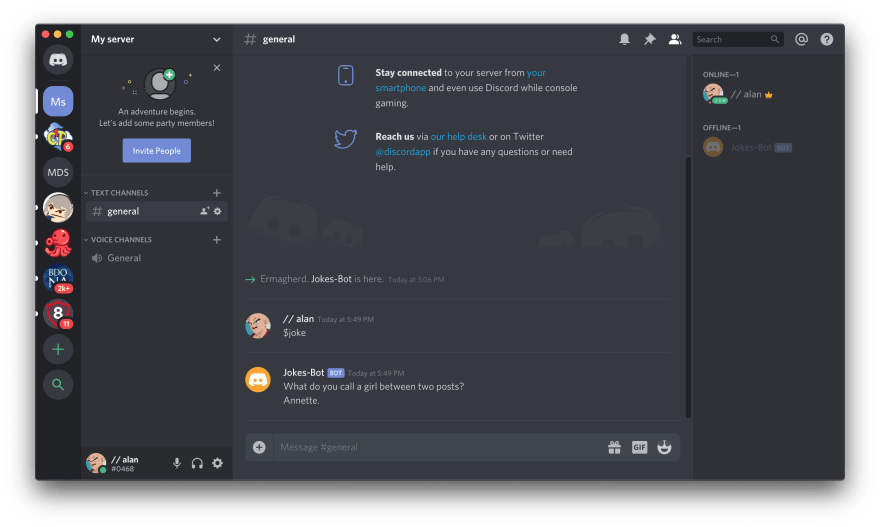 In total we should have two files. Namely the "discord_joke_bot.py" file and the "joke_api.py" file.

The following is the "discord_joke_bot.py" file.

The following is the "joke_api.py" file.

You can also find the complete code over at my Github.

Here is a list of resources that may be helpful:

What and how do I perform a search operation in Typesense?