Hello there! Here we will continue when we left off in the previous part. So right now we have our shiny static actions all set up; now, in this post, we will scaffold the FastApi project and write the code needed to query FaunaDB.

Ok so first I will assume you have both Python 3.8.2 and virtualenv in your system; if not, please set them up according to your operating system before continuing.

Next, let's create a folder and a virtual environment for our project; for the remaining of this article I will assume a UNIX-based system:

Now, we will install the packages we need, and what do we need? Just FastApi and Fauna! Well no, we'll need also a couple more:

Ok, the two in the middle we recognize, but what are the other two? Well, python-dotenv it's a package FastApi (or more precisely, Pydantic) uses to parse .env files; just like Javascript's dotenv.

On the other hand, uvicorn it's an ASGI server; remember those? It's the layer that allows FastApi to talk to HTTP servers like Nginx or Apache, it also has a nice dev server built-in along with hot reload when the code changes.

Now, let's create a nice file structure for our project:

What do we have here?

Now that we have our packages installed and our file structure all set up, let's figure out what we need first.

The core of this project is, basically, storing and retrieving users. For that, we need to query our database; now, how do we do that? First, let's see how Fauna stores data: the records fauna stores are called documents (like in MongoDB), and documents are stored into collections. Like I mentioned in the previous article, Fauna does not enforce any type of data schema at the database level, and because of that, we can find inconsistencies between documents in the same collection. Nevertheless, all the documents have two common properties:

Cool, now that we know how the data is stored, we need to know how to query it. Because no data schema is enforced at the database level, Fauna does not know out of the box how to query our data (we can't for example, query by username like we would do in a relational database); to tell Fauna how to query our data, we need to create an index. Indexes are a set of instructions, associated with a particular collection, that tells fauna how to query that collection; at the same time, we can tell indexes what data we need to be retrieved. So, for example, maybe we need to list all our users, this list will only show their username and the date they signed up; it would be a waste of bandwidth to fetch all the additional data we won't show in the list. So, for this, we can create an index that does exactly this: paginate through all the users and retrieve only their username and the document creation date.

Ok, enough theoretical talking, let's recall our flowchart from the last post and see what indexes we need: 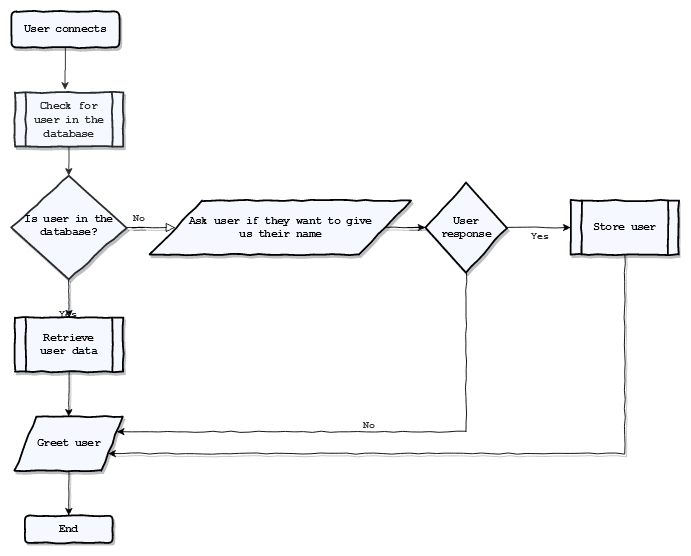 Now, we see that we need to check if the user already exists. For that, we'll need an index that queries our collection via a unique index. What property of our users is unique? That's right, their phone number! So, let's go to the Fauna website.

Then, in the dashboard, let's click in "New Database" and create our shiny new instance: 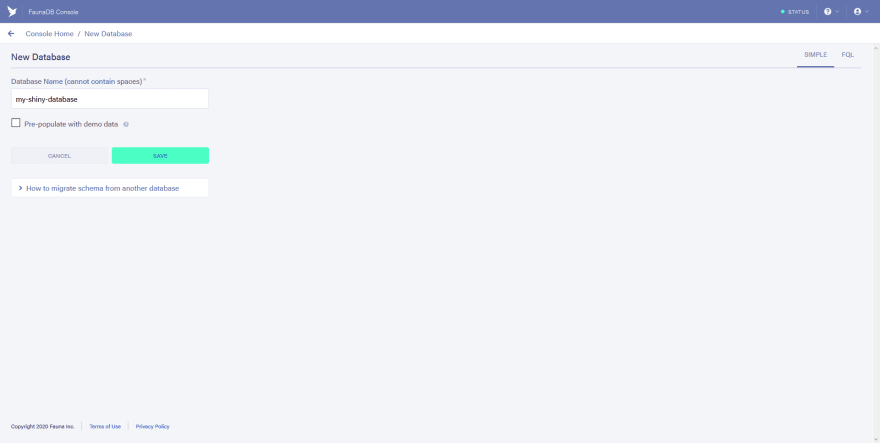 Next, let's create our collection, I named mine users for the sake of originality: 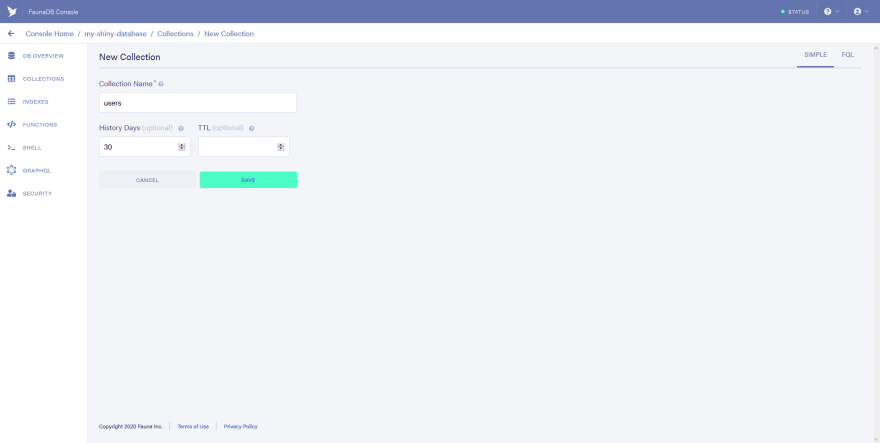 Now, with the database and collection created, we can finally make our index: 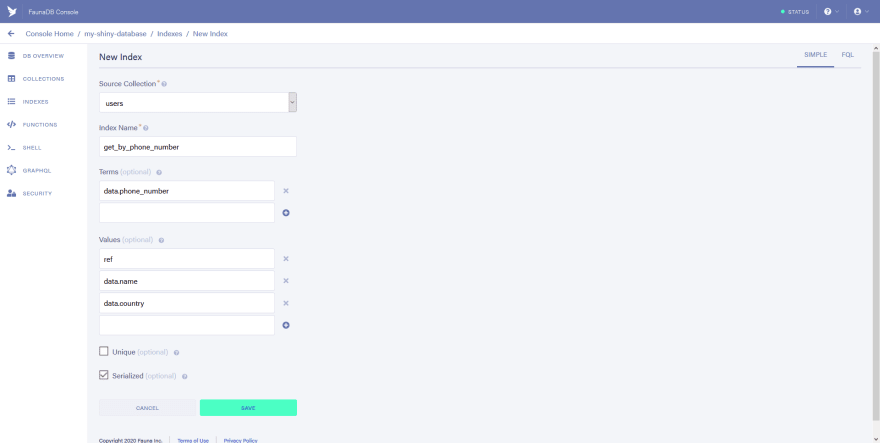 Ok, we have several things going on here:

Cool! Now let's click save and leave the dashboard for now.

Ok, now we need to write code in order to query our database from python. For that, I adopted an OOP approach, kinda like a traditional ORM:

Now, what the heck do we have here? First of all, what is BaseModel parent class? Well, FastApi uses Pydantic under the hood. Pydantic it's a validation library that uses the type hints introduced in Python 3.6 for doing its validation. For a class to be validated with Pydantic, we have to do two things:

And that's what we have done here:

After that, we have just defined a constructor to init the base class.

Now, we come to the heart of this class, the get_by_phone static method:

You noticed above that I imported a magical session object, you also probably guessed that was the Fauna client initialized somewhere. If you did, you are correct; let's write that initialization code now:

For this, we need to first write a model to hold the configuration of our app.

Now, what's this? Well, Pydantic comes with a very handy class to handle settings (and validation of those settings) for your application. Let's explain what's going on here:

Great, now let's put this model into use:

Not much going on here: we are just checking if DEBUG is set. If it is, we populate our config via a .env file; if not the config will be taken from environment variables.

Now, the Pydantic base setting has an order of priority to load variables:

So if an attribute not marked as Optional which does not have a default and is not defined either in the .env nor in the environment, will cause Pydantic to throw an error.

Next, the misterious session object:

Nothing crazy here (and sorry for the global), we are just checking if Fauna client is initialized: if it is, we just return it, if it is not, then we initialize it with the key loaded from our configuration. Check that we are calling the get_secret_value method, remember that helper class from Pydantic? Well, we have to call this method in order to get the real value, otherwise, we would get a bunch of asterisks.

Now finally! Let's write our first endpoint. What does this endpoint do? Well, according to our flowchart, it will be responsible to check if our user is in the database and will react accordingly. Let's create a routes folder inside our source root:

Inside this is of course our __init__.py and our new greet.py file which will contain our routes. Next, let's first modify our bot's schema to redirect to our endpoint when the user greets:

Here, we just changed our default action to be a redirect instead of a say action. Also, we said the Autopilot should send this as a POST request.

Now, in order to write our endpoint, we need to take a look at the Autopilot request reference. There, we learn that autopilot sends the data using the application/x-www-form-urlencoded encoding. For FastApi to parse that, we need yet to add another library:

Not much going on here, if you've worked with Python web frameworks this will be pretty familiar to you. Let's see what's going on:

So, in this case, we're expecting a parameter called UserIdentifier (as per the Twilio docs), which is a string. We also pass Form as a default value: that way we tell FastApi that we are expecting an application/x-www-form-urlencoded request. The ellipsis (the three ...) inside the Form constructor is just telling that this form has no dependencies (dependencies are another FastApi feature beyond the scope of this post). But, after all, what's a UserIdentifier? Well, depends on the channel Autopilot is using to communicate with the user, in Whatsapp and SMS channel it will be the user's phone number.

After that it's all pretty self-explanatory:

By default, if we return a Python dict from a FastApi endpoint, it will be encoded as application/json; which is just what we need. Also, check that we are adhering to Autopilot's Action Schema. We already know about the say and redirect, but what is this remember thingy? Well, Autopilot bots have the concept of "session": sessions are a time frame on which a conversation between the bot and a user is considered active. While the session is active, all data interchanged between the bot and the user will be store and the bot is able to send messages to the user without having to wait for their input; the time the session is considered active varies between channels, for Whatsapp is 24 hours. Now, the bot also has a memory that lasts the whole session; with the remember action; we are telling the bot to store those values in memory. That way, if we need to refer to the user's name or country, we don't have to hit the database again.

So that's all for this post folks! Initially, this was to be a two-post series, but it overextended a bit. So for the sake of not boring the heck out of you, I decided to make this into a three-post series. In the next post, we'll implement the endpoint to store the name, deploy this thing live and a few more tricks ;)