As you might have seen from my last few posts I have quite a lot running on my Raspberry Pi.

I am currently using a Raspberry Pi 2 B which is a great device but only has 1GB of RAM and 900 MHz CPU. So I am a little worried sometimes that I am going to overload it with all the docker services I am running on it.

I use Grafana a lot at work and love it, so I thought it would be good to use it to monitor my Raspberry Pi.

With any monitoring, it is important to know what you want to keep an eye on.

In my case I am interested in the following:

There are probably quite a few services that work with Grafana for monitoring. However, I am using the following:

I will go straight to the Docker Compose file you need and will explain what you need to change for your setup:

You only need to change the following environment variables to match the domain for your Raspberry Pi. If you are running locally you could use localhost and http://localhost/grafana.

You will notice I am using braingamer/cadvisor-arm:latest for cAdvisor. This is because the official Google image doesn’t support ARM and is marked as deprecated. Of course, if you wanted to you could build your own docker image.

This is the Prometheus config file I am using, prometheus.yml:

This is what my Grafana dashboard looks like. If you want something similar then you can copy my dashboard json. 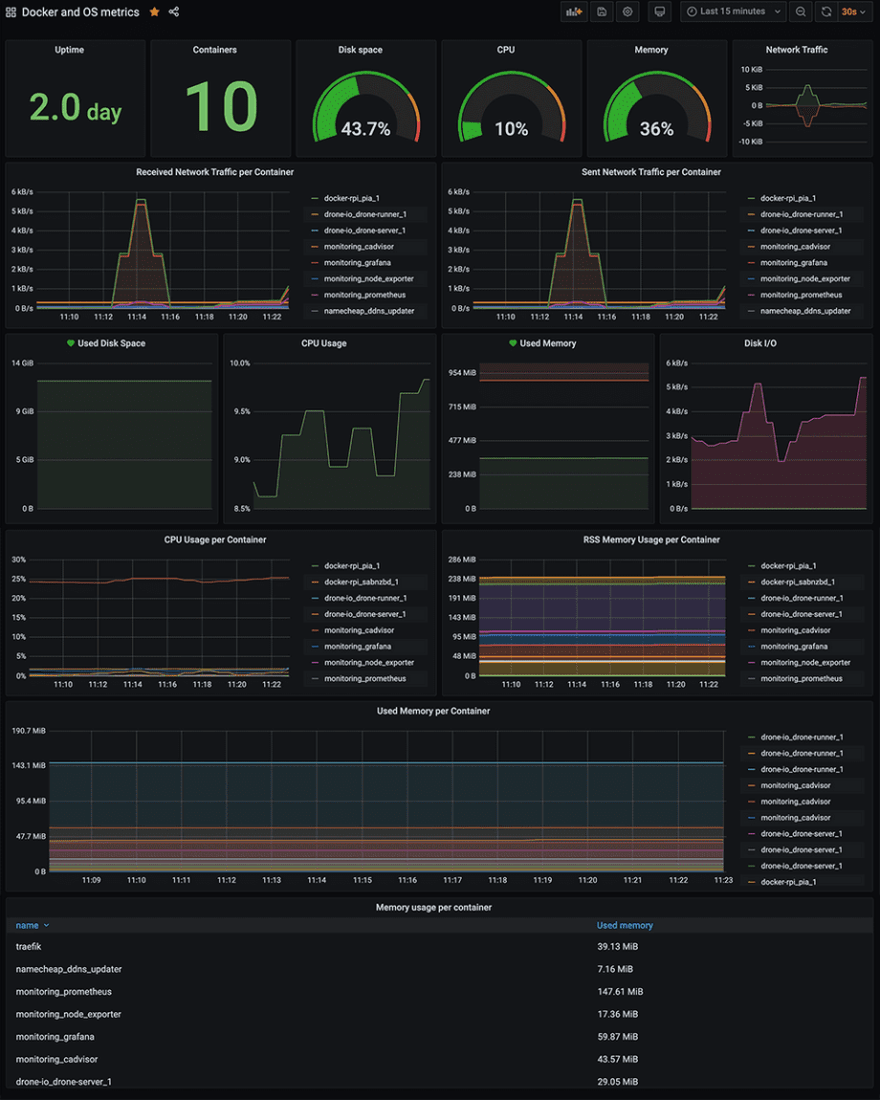 There are quite a few other metrics available from node-exporter and cAdvisor I could have used. Let me know in the comments if find any useful ones.

Alex Hyett
Engineering Lead with over 10 years worth of professional experience and many more before that. Self confessed geek with a passion for programming and all things tech.
Useful Docker Commands Worth Saving
#docker #tutorial
How to set up Drone CI on Raspberry Pi (and why you shouldn't)
#docker #raspberrypi #cicd
Traefik vs Nginx for Reverse Proxy with Docker on a Raspberry Pi
#devops #nginx #docker #raspberrypi

Once suspended, alexhyettdev will not be able to comment or publish posts until their suspension is removed.

Once unsuspended, alexhyettdev will be able to comment and publish posts again.

Once unpublished, all posts by alexhyettdev will become hidden and only accessible to themselves.

If alexhyettdev is not suspended, they can still re-publish their posts from their dashboard.

Once unpublished, this post will become invisible to the public and only accessible to Alex Hyett.

Thanks for keeping DEV Community safe. Here is what you can do to flag alexhyettdev:

Unflagging alexhyettdev will restore default visibility to their posts.