Nowadays, as the JS/TS ecosystem continues to mature, developers are writing more and more build scripts and configuration files for their projects. How many times you've copied identical configs for babel, eslint, jest, typescript and the life cycle scripts in package.json?

For me, I've 40 common devDependencies, 24 scripts and 7 config files across my npm projects. Putting the need to copy and paste these things to bootstrap a new project aside, updating these tools across existing projects is just horrible pain. 🤦‍♂️

So I spent my spare time making presetter, a utility tool you'd love to use for easily and quickly reusing build scripts/configs across different npm projects. Now, instead of these countless devDependencies, build scripts, and config files, I can reduce them into just 2 devDependencies (or just 1 if you use npm 7+ which auto install peer dependencies automatically) and 1 config file (for presetter to determine which preset to use)! 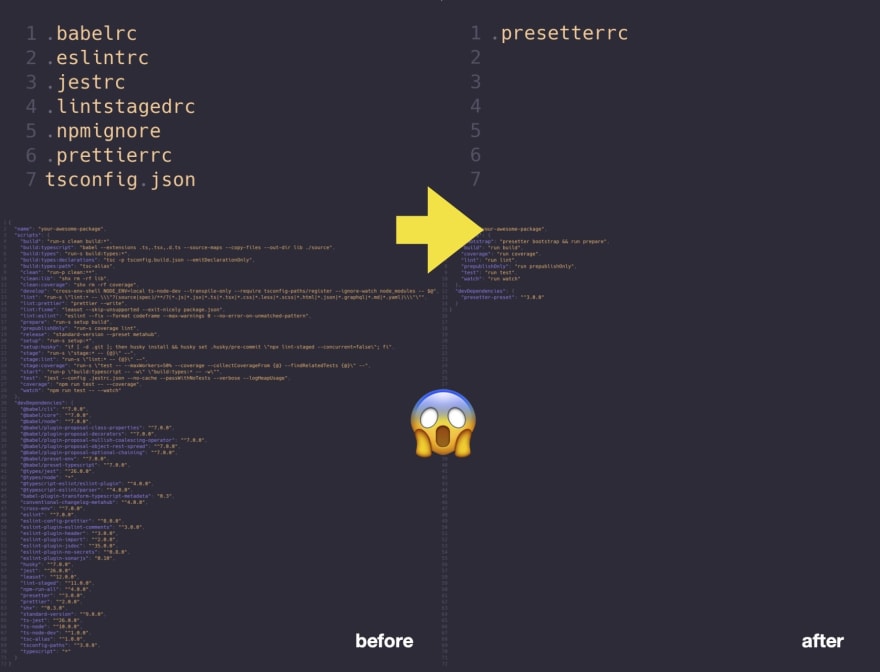 😀 Sounds good. What is presetter and a preset then?

Presetter is a new open-source project that simplifies workflow for js/ts developers by providing a utility tool to enable us to store all common developmental configurations in one place, not a copy of those on each repo. This allows not only for the reuse of configurations but also reduces time spent on setup and maintaining the build systems across projects. Presetter is written in typescript but compatible with all js packages, backend, or frontend, as long as you use a package.json.

By pairing them up, you no longer need to spend hours on maintaining the build systems across projects. Instead, simply pick (and customise) a predefined preset either off-the-shelf from the community or an unpublished private package living in your git repository. What's more? You get version control on the build system for free due to the way how a preset is packaged. Life is much simpler since then!

To setup presetter for managing your build system, you can easily achieve it via the presetter use command:

which would perform the following few things:

After starting the project through bootstrapping, you have reached a point where it normally takes 5-10 minutes to duplicate all configuration settings from another repository. Now, you can achieve it by just ONE COMMAND!

Using presenter-preset for example, when you invoke run build, presetter will merge the custom scripts defined in your package.json and the templated defined here, then invoke run-s clean build:*.

You can also use run <script name> as part of your life cycle scripts to make your build experience identical to what you have before. For example,

Short answer, SURE! You may be just 99% satisfied with the preset and want to change a little thing like turning on/off a lint rule, presetter just get you covered!

To do this, you just need to pass your customised config in the config field in .presetterrc.json. This config will be passed to the preset's configurator to achieve customisation. After adding your config, run npx presetter bootstrap again to regenerate the config files.

For example, to add DOM as a library in tsconfig.json provided by presetter-preset, simply add these lines in your presetterrc.json:

Each preset can have its own set of customizable features. So check the preset's documentation for a full list of customisable elements.

🎩 Cool! What's the magic behind it?

Presetter may sound too good to be true. Now you don't need to copy and paste all the time. But you may wonder how does it work?

When you run presetter bootstrap, it

When you run presetter run <command>, it

That's basically all about how preset works. Now, let's see what kinds of presets are available and how to contribute one!

🐣 Alright. What presets can I try today?

A preset is a collection of common development configurations that can be applied to a project. It provides 3 groups of common building tools

Today, we have 4 official presets for different kinds of projects:

Each preset is a single npm package. You can publish yours to share it with the community or just make it as a github repo without publishing it. Both works.

Another thing is that you can also contribute to the official presets. See CONTRIBUTING for all things related to preset's development and contribution!

Now you can stop worrying about managing devDependencies, scripts and config files. Presetter is a tool that reduces the complexity of your build system.

We all know that duplication of code is a bad thing, and there are many tools to eliminate it, but we don't have a tool for avoiding copying build configuration.

It's time to put the messy build configs aside. Try presetter today and visit the repository on Github for detailed documentation.

Drawing kawaii sharks and sea life with HTML and CSS

Once suspended, alvis will not be able to comment or publish posts until their suspension is removed.

Once unsuspended, alvis will be able to comment and publish posts again.

Once unpublished, all posts by alvis will become hidden and only accessible to themselves.

If alvis is not suspended, they can still re-publish their posts from their dashboard.

Once unpublished, this post will become invisible to the public and only accessible to Alvis Tang.

Thanks for keeping DEV Community 👩‍💻👨‍💻 safe. Here is what you can do to flag alvis:

Unflagging alvis will restore default visibility to their posts.