The year 2018 brought a lot of new features into the React Ecosystem. The addition of these features is helping developers to focus more on user experience rather than spending time writing code logic.

It seems that React is investing more towards a functional programming paradigm, in a search of great tools for building a UI which is more robust and scalable.

At ReactConf October 2018, React announced a proposal API called Hooks which took the community by storm. Developers started exploring and doing experiments with them and it received great feedback in the RFC (Requests for comments). React 16.8.0 is the first release to support Hooks 🎉.

This article is my attempt to explain:

If you just want to have a feel of this new API first, I have created a demo to play with. Otherwise, let’s get started by looking at 3 major problems we are facing as of now:

You all know that reusing code logic is hard and it requires a fair bit of experience to get your head around. When I started learning React about two years ago, I used to create class components to encapsulate all my logic. And when it comes to sharing the logic across different components I would simply create a similarly looking component which would render a different UI. But that was not good. I was violating the DRY principle and ideally was not reusing the logic.

Slowly, I learned about HOC pattern which allowed me to use functional programming for reusing my code logic. HOC is nothing but a simple higher order function which takes another component(dumb) and returns a new enhanced component. This enhanced component will encapsulate your logic.

Then we moved into the trend of passing a function as props which marks the rise of the render props pattern. Render prop is a powerful pattern where “rendering controller” is in your hands. This facilitates the inversion of control(IoC) design principle. The React documentation describes it as a technique for sharing code between components using a prop whose value is a function.

A component with a render prop takes a function that returns a
React element and calls it instead of implementing its own render logic.

In simple words, you create a class component to encapsulate your logic (side effects) and when it comes to rendering, this component simply calls your function by passing only the data which is required to render the UI.

Even though both of these patterns were resolving the reusing code logic issues, they left us with a wrapper hell problem as shown below: 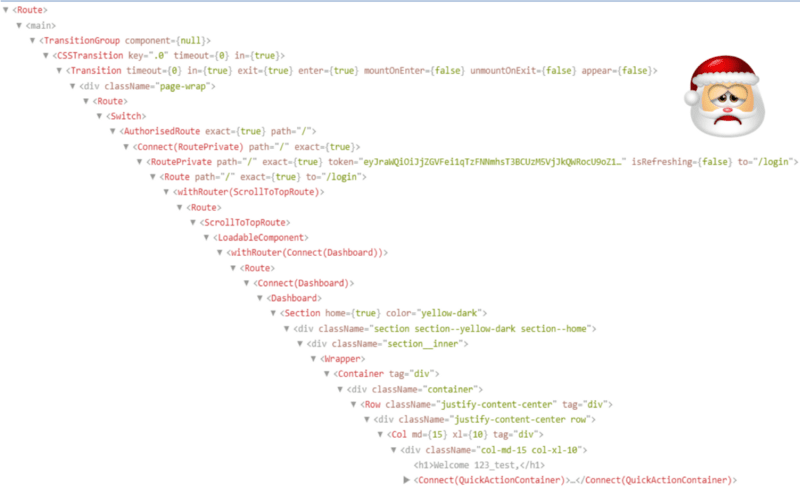 So, to sum it up we can see there are a few problems associated with reusing code logic:

Components are the basic unit of code reuse in React. When we have to abstract more than one behaviour into our class component, it tends to grow in size and becomes hard to maintain.

By looking at the code example below we can deduce the following:

3. Classes are Hard for Humans and Machines

Looking at the human side of the problem, we all once tripped trying to call a function inside a child component and it says:

and then scratched our head trying to figure out the cause: that you have forgotten to bind it in the constructor. So, this remains the topic of confusion even among some experienced developers.

this gets the value of object who invokes the function

Also, you need to write lots of boilerplate code to even start implementing the first side effect:

Classes are also hard for machines for the following reasons:

All the three problems we discussed above are not three distinct problems but these are symptoms of one single problem and that is React has no stateful primitive simpler than class component.

With the advent of the new React Hooks proposal API, we can solve this problem by abstracting our logic completely outside of our component. In fewer words, you can hook a stateful logic into the functional component.

React Hooks allow you to use state and other React features without writing a class.

Let’s see that in the code example below:

Now, the question is where do we call setMouseX. Calling it below the useState hook will cause an error. It will be the same as calling this.setState inside render function of class components.

So, the answer is that React also provides a placeholder hook called useEffect for performing all side effects.

This effect will be called both after the first render and after every update. You can also return an optional function which becomes a cleanup mechanism. This lets us keep the logic for adding and removing subscriptions close to each other.

The second argument to useEffect call is an optional array . Your effect will only re-run when the element value inside the array changes. Think of this as how shouldComponentUpdate works. If you want to run an effect and clean it up only once (on mount and unmount), you can pass an empty array ([]) as a second argument. This tells React that your effect doesn’t depend on any values from props or state, so it never needs to re-run. This is close to the familiar mental model of componentDidMount and componentWillUnmount. If you want a deep dive into useEffect hook, I've written another article here.

But isn’t our MouseTracker component still holding the logic inside? What if another component wants to share mousemove behaviour as well? Also, adding one more effect (e.g window resize) would make it little hard to manage and we are back to the same problem as we saw in class components.

Now, the real magic is you can create your custom hooks outside of your function component. It is similar to keeping the logic abstracted to a separate module and share it across different components. Let see that in action.

And now we can clean up our MouseTracker component code (90%) to a newer version as shown below:

But before settling down and singing praises of React Hooks, let’s see what rules we should be aware of.

Explaining these rules are beyond the scope of this article. If you’re curious, I would recommend reading React docs and this article by Rudi Yardley.

React also has released an ESLint plugin called eslint-plugin-react-hooks that enforces these two rules. You can add this to your project by running:

This article was part of my talk at the ReactSydney meetup December 2018. I hope this article has intrigued you to give React hooks a try. I am super excited about the React roadmap which looks very promising and has the potential to change the way we use React currently.

You can find the source code and demo at this link.

If you liked the article, a few ❤️ will definitely make me smile 😀. There's more to come.