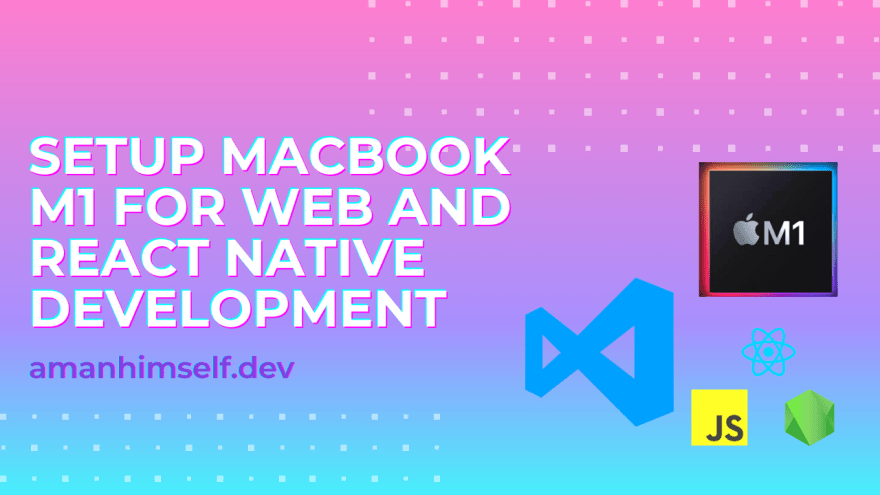 Note: Most of this article was updated in August 2021. The Macbook Pro M1 I was using crashed and stopped working without any reason on August 25, 2021. In just seven months of use.

It took time to get it repaired. That forced me to buy another laptop. While setting up the new laptop, I thought it is an excellent time to update this post.

I recently upgraded from Macbook Air 2017 to Macbook Pro with an M1 chip. My four-year-old Macbook Air was giving up. The performance to run heavy tasks like using the iOS simulator when developing and working on React Native apps was declining. I had long given up using the Android emulator and used an actual Android device for testing. December 2020 was the time I decided its time to upgrade.

I had a long internal discussion with myself for almost a month about whether I should upgrade to M1 or stick with Intel-based chips and spend them bucks. Don't get me wrong here, M1 is not cheap either as I did go for a RAM upgrade to max limits, which is currently 16GB in the base model.

After going through some online reviews and research, the kind of performance I was expecting has been worth it so far (it is fast, no doubt). I received it two weeks back when writing this post, and since then, I have installed all the necessary tools and utilities that help me work on Web development and React Native apps.

My favorite terminal app that I have been using for years is iTerm. I am currently using two versions of iTerm on my setup. One with Rosetta 2 enabled and the default one. This way, I can only use the Rosetta 2 emulator when required. There are no performance issues I have found with using iTerm with Rosetta 2 for ARM-based applications. 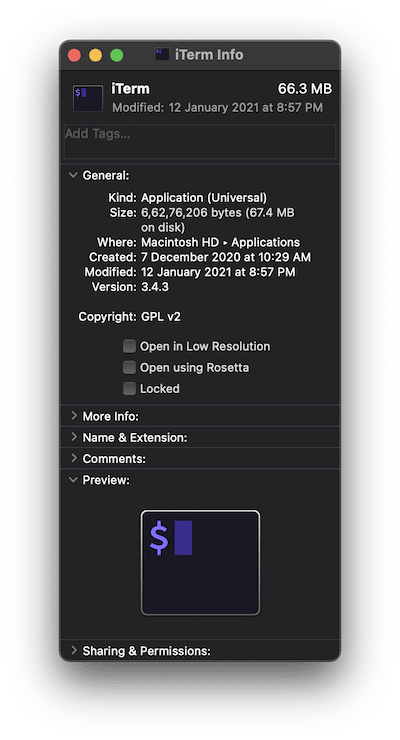 If you'd like a similar setup, go to the Applications folder in your Macbook and duplicate the iTerm application. 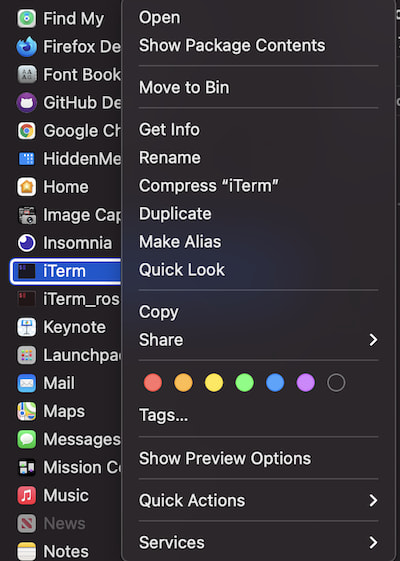 You can rename the duplicated iTerm app. I have renamed it to iTerm_rosetta to differentiate between the two. Right-click the duplicated app and click Get Info. In the General, check the box where it says Open using Rosetta. 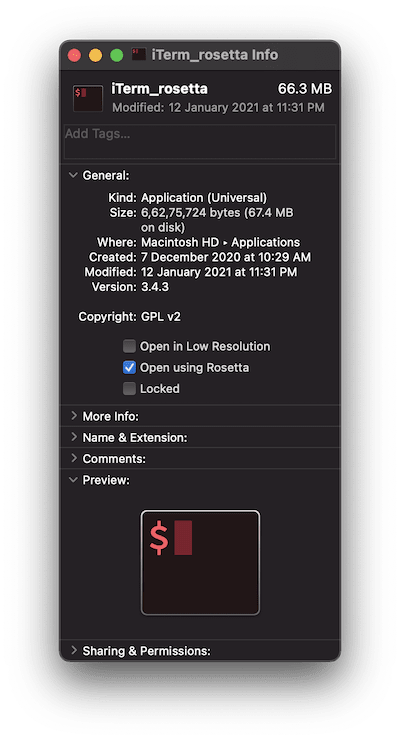 Now, if you open the second terminal, it will be using Rosetta 2 emulator by default.

Other iTerm profile settings that I use: 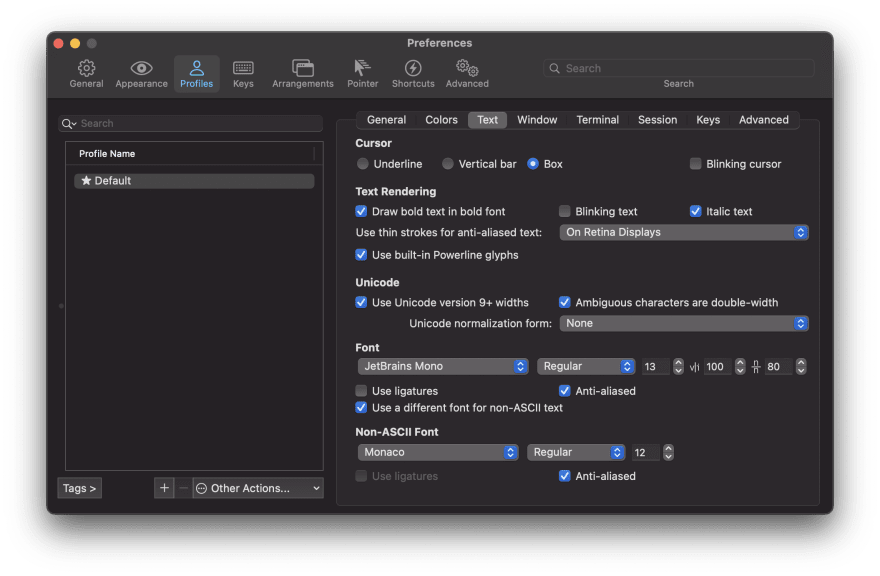 For the overall looks and appearance, I use Dracula Pro Color Presets created by Zen Rocha.

And my last favorite thing is to split the working directory into two more different tabs using Command + D for horizontal panes.

Make sure to have the following setting configured from 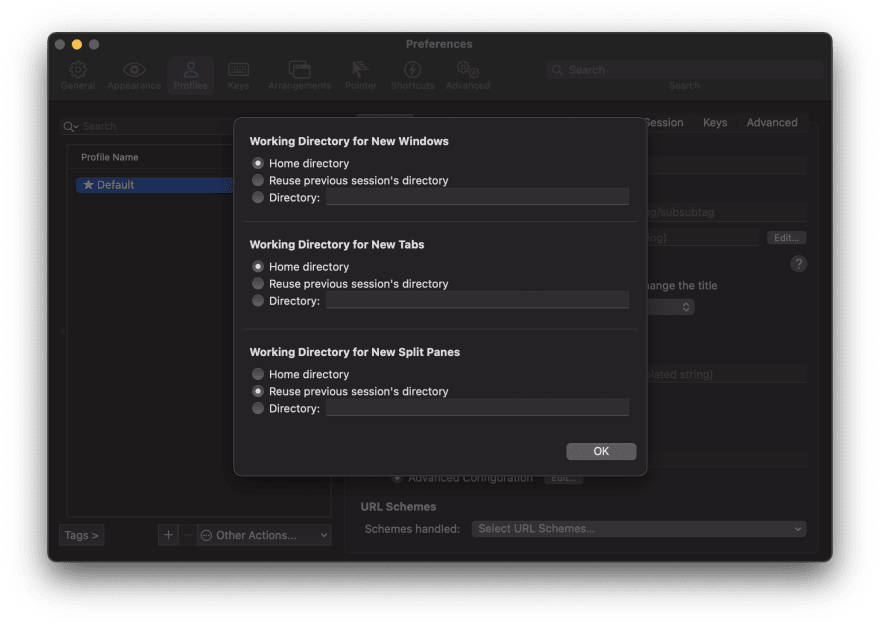 For terminal prompt, I use Spaceship ZSH.

After installing Git, for me, the next step is to install Xcode app from Apple's App Store.

Then, install "command line tools". It is required by many of the formulae in Homebrew.

After installing it, make sure to open it for the first time, from the menu bar, open Xcode > Preferences > Locations and make sure that Command Line Tools point towards the current Xcode app. 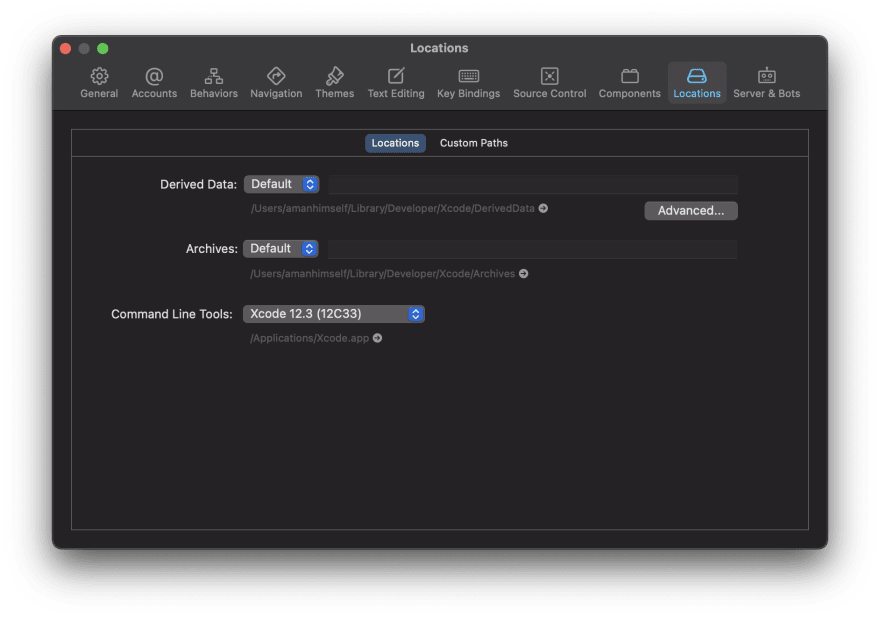 On December 1, 2020, the Homebrew team announced on their website about the version release 2.6.0. The most significant changes among others they listed were the support for macOS Big Sur, using brew commands instead of brew cask and beginning to support macOS M1 and Apple Silicon or ARM-based chips.

Using the terminal, you can install the Homebrew by executing the default command:

When I bought Macbook Air M1, it had function keys (that got me excited), but I don't understand why Apple decided to replace function keys that would allow me to control Keyboard Brightness?! And moreover, replace it with "Do Not Disturb".

Why? That got me confused 🤷

I found this tool called karabiner Elements that can be installed as a brew formula: 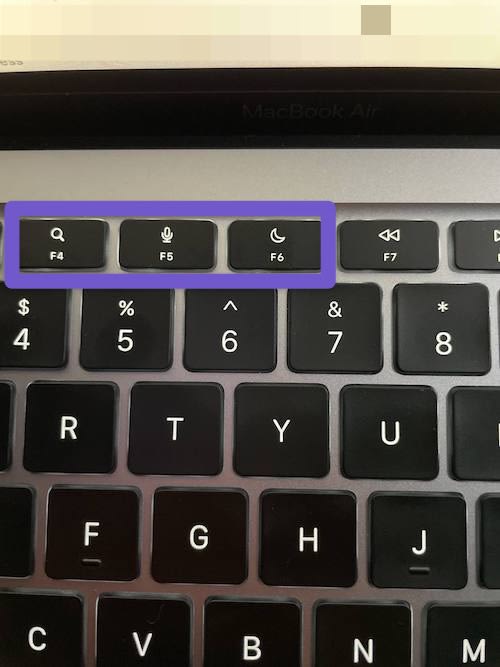 Here are the key mappings I am using now: 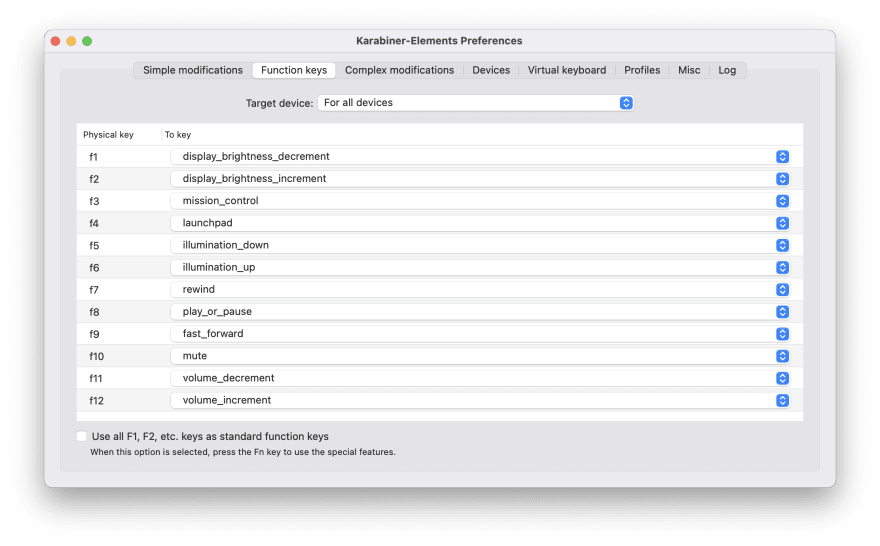 To authenticate GitHub to be used from the terminal environment, I'd recommend you to check out the official document on creating and accessing personal tokens.

🔥 Tip: As of Git version 2.28 there is a new config option to set the default branch to main. Set it globally and forget about it.

ZSH and Oh My Zsh

ZSH is the default shell in macOS Big Sur. However, I like to use Oh My Zsh to manage the ZSH configuration, plugins, and a theme to prettify the terminal.

To install, run the command below:

After installation, make sure that the file .zshrc is exporting the below path at the top:

The first I like to do after setting up the bare minimum ZSH configuration is to install a plugin called
zsh-syntax-highlighting. It provides syntax highlighting for the ZSH shell. Execute the series below commands in the terminal window:

This is my final ZSH configuration in the file ~/.zshrc file:

After installing the syntax highlight plugin, it starts to recognize the commands: 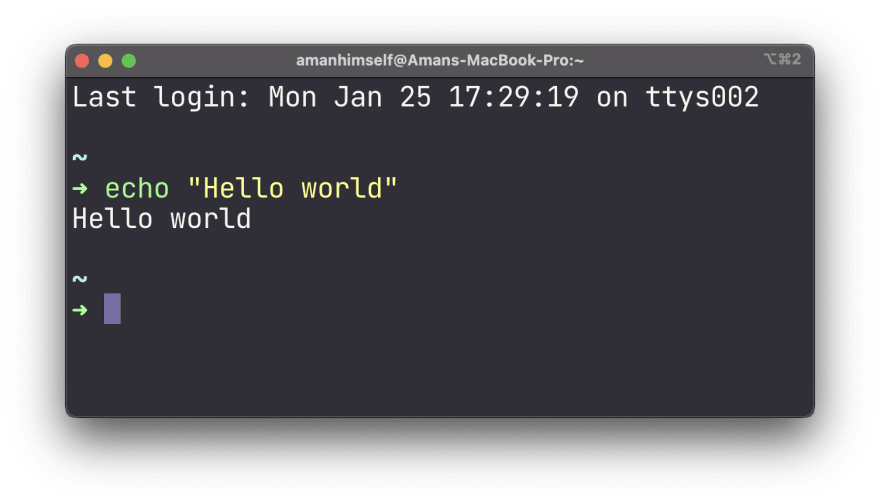 VSCode and VS Code Insiders are currently supported on ARM chips (as of March 13, 2021). Download the installer for Insiders edition from here and for VSCode here. 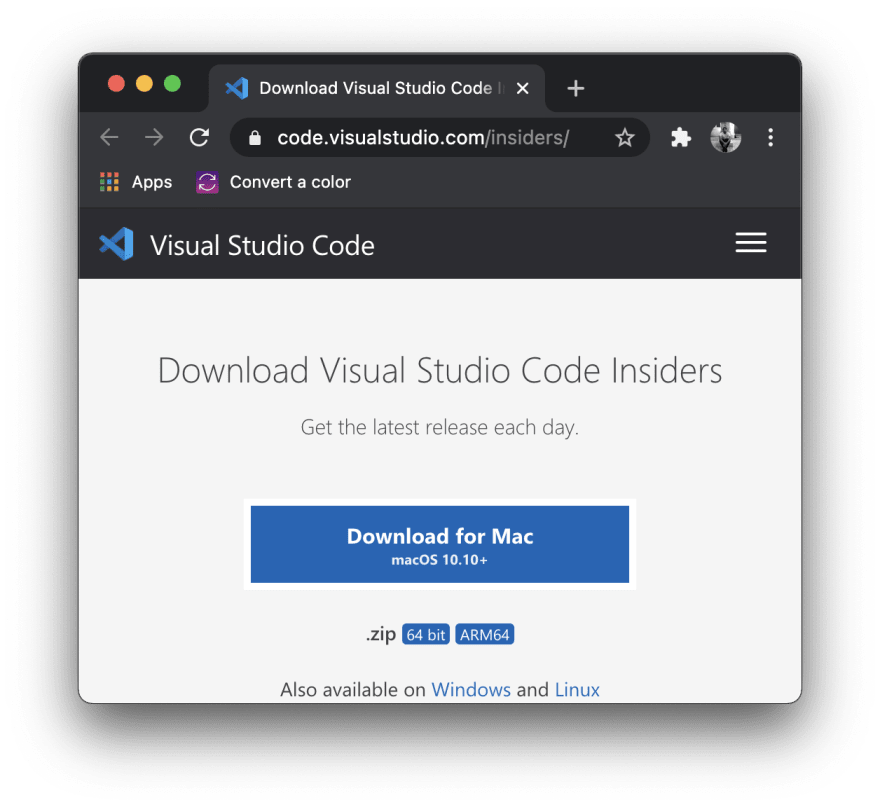 I am still using the same VSCode configuration from my previous setup:

I usually like to switch between a dark and a light theme.

I use VSCode editor for both writing code and writing blog posts. Thus, the list of extensions below is the combination of extensions that fulfills both of my purposes.

Global NPM Packages I use

⚛️ For more instructions on how to set up a development environment for React Native, please follow the official documentation here.

Update: I am not using the Rosetta environment to install anything on the secondary machine since August 2021. That is the reason I've mentioned it at the end of the post.

Rosetta 2 is the lifeline that allows you to run apps designed for Intel-based chips that use x86 architecture on ARM-based chips (in this case M1). This solution is provided by Apple in the form of an emulator and doesn't come pre-installed. You have to install it manually. Fire up the Terminal application that comes pre-installed on the Big Sur and let your first command to execute be:

If you decide not to put the flag --agree-to-license, you will be prompted by Apple's interactive install, and you will have to agree to their terms and license conditions to use it.

That’s the setup I now use for my JavaScript, Node.js, React and React Native. I think it's a good machine. Hopefully, M1 is just the beginning of a new era of powerful computers for daily work use 🤞

🤔 The only thing left for me is to find a way to transfer all laptop swag/stickers from my Macbook Air 2017 to Pro. I miss having them on this one.

isapplesiliconready.com is another helpful link I found to check what is compatible to work on Apple Silicon chips natively or using Rosetta or not optimized at all.

Get started with the new Azure Static Web Apps CLI