Over the past decade, engineering and technology organizations have converged on a common set of best practices for building and deploying cloud-native applications. These best practices include continuous delivery, containerization, and building observable systems. 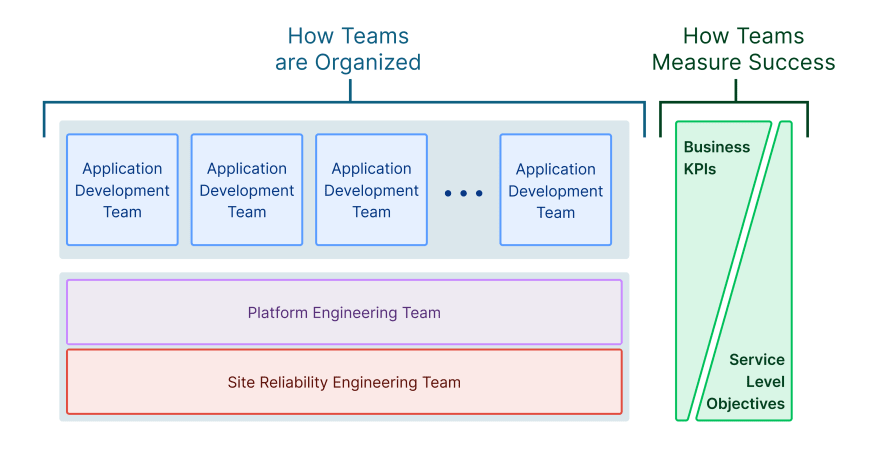 These two teams are frequently confused and the terms are sometimes used interchangeably. Indeed, some organizations consolidate SRE and platform engineering into the same function. This occurs because both roles apply a common set of principles:

Platform engineers constantly examine the entire software development lifecycle from source to production. From this introspective process, they build a workflow that enables application developers to rapidly code and ship software. A basic workflow typically includes a source control system connected with a continuous integration system, along with a way to deploy artifacts into production.

Site reliability engineers create and evolve systems to automatically run applications, reliably. The concept of site reliability engineering originated at Google, and is documented in detail in the Google SRE Book. Ben Treynor Sloss, the SVP at Google responsible for technical operations, described SRE as “what happens when you ask a software engineer to design an operations team.”

A key part of SRE culture is to treat every failure as a failure in the reliability system. Rigorous post-mortems are critical to identifying the root cause of the failure, and corrective actions are introduced into the automatic system to continue to improve reliability.

One of us (Bjorn Freeman-Benson) managed the engineering organization at New Relic until 2015 as it grew from a handful of customers to tens of thousands of customers, all sending millions of requests per second into the cloud. New Relic had independent SRE and platform engineering teams that followed the general principles outlined above.

One of the reasons these teams were built separately was that the people who thrived in these roles differed. While both SREs and platform engineers need strong systems engineering skills in addition to classic programming skills, the roles dictate very different personality types. SREs tend to enjoy crisis management and get an adrenaline rush out of troubleshooting an outage. SRE managers thrive under intense pressure and are good at recruiting and managing similarly minded folks. On the other hand, platform engineers are more typical software engineers, preferring to work without interruption on big, complex problems. Platform engineering managers prefer to operate on a consistent cadence.

Over the past decade, DevOps has become a popular term to describe many of these practices. More recently, GitOps has also emerged as a popular term. How do DevOps and GitOps relate to platform and SRE teams?

Both DevOps and GitOps are a loosely codified set of principles of how to manage different aspects of infrastructure. The core principles of both of these philosophies -- automation, infrastructure as code, application of software engineering -- are very similar.

DevOps is a broad movement that began with a focus on eliminating traditional silos between development and operation. Over time, strategies such as infrastructure automation and engineering applications with operations in mind have gained widespread acceptance as ways better build highly reliable applications.

GitOps is an approach for application delivery. In GitOps, declarative configuration is used to codify the desired state of the application at any moment in time. This configuration is managed in a versioned source control system as the single source of truth. This ensures auditability, reproducibility, and consistency of configuration.

This story was originally published on the Ambassador blog.

Monitoring and Observability in Azure Kubernetes Service With Prometheus

How to build your own “DoorDash” app

Flutter builds are way faster with M1 machines: A comparison of VMs

Once suspended, ambassadorlabs will not be able to comment or publish posts until their suspension is removed.

Once unsuspended, ambassadorlabs will be able to comment and publish posts again.

Once unpublished, all posts by ambassadorlabs will become hidden and only accessible to themselves.

If ambassadorlabs is not suspended, they can still re-publish their posts from their dashboard.