Word Embeddings are one of the most interesting aspects of the Natural Language Processing field. When I first came across them, it was intriguing to see a simple recipe of unsupervised training on a bunch of text yield representations that show signs of syntactic and semantic understanding.

In this post, we will explore a word embedding algorithm called "FastText" that was introduced by Bojanowski et al. and understand how it enhances the Word2Vec algorithm from 2013.

Suppose we have the following words and we want to represent them as vectors so that they can be used in Machine Learning models.

A simple idea could be to perform a one-hot encoding of the words, where each word gets a unique position.

We can see that this sparse representation doesn't capture any relationship between the words and every word is isolated from each other.

Maybe we could do something better. We know Ronaldo and Messi are footballers while Dicaprio is an actor. Let's use our world knowledge and create manual features to represent the words better.

This is better than the previous one-hot-encoding because related items are closer in space. 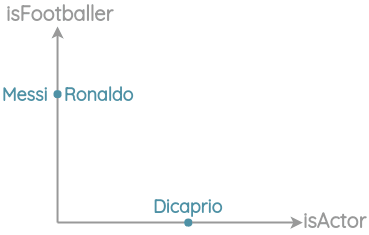 We could keep on adding even more aspects as dimensions to get a more nuanced representation.

But manually doing this for every possible word is not scalable. If we designed features based on our world knowledge of the relationship between words, can we replicate the same with a neural network?

Can we have neural networks comb through a large corpus of text and generate word representations automatically?

This is the intention behind the research in word-embedding algorithms.

In 2013, Mikolov et al. introduced an efficient method to learn vector representations of words from large amounts of unstructured text data. The paper was an execution of this idea from Distributional Semantics.

The first was called "Continuous Bag of Words" where need to predict the center words given the neighbor words.

The second task was called "Skip-gram" where we need to predict the neighbor words given a center word.

Representations learned had interesting properties such as this popular example where arithmetic operations on word vectors seemed to retain meaning.

While Word2Vec was a game-changer for NLP, we will see how there was still some room for improvement:

To solve the above challenges, Bojanowski et al. proposed a new embedding method called FastText. Their key insight was to use the internal structure of a word to improve vector representations obtained from the skip-gram method.

The modification to the skip-gram method is applied as follows:

For a word, we generate character n-grams of length 3 to 6 present in it.

To understand the pre-training, let's take a simple toy example. We have a sentence with a center word "eating" and need to predict the context words "am" and "food".

To train your own embeddings, you can either use the official CLI tool or use the fasttext implementation available in gensim.

10 Skills Every Data Scientist Should Know

Plotting High Quality Plots in Python with Plotly and Clufflinks

How did Netflix use ML to become the world’s streaming leader?