Say whatever you will about the world of app creation, but there is no denying that it is exceptionally vast and contains practically endless possibilities within itself.

What is important here is the fact that the vastness of possibilities the world of app creation provides is what allows you to enter it seamlessly. And, even more than that, it allows you to create great life-improving applications and significantly improve your finances as well. Take a look at how to create a fully working application from two points of view: a theoretical and a practical one.

Reasons to create your apps on React

Let’s begin with the theoretical side of the question. There are many ways to create an app, ranging from Xamarin and AppInstitute to the main hero of this article – React. Don’t get us wrong, this is not a biased opinion, each tool has its advantages (and disadvantages, to be completely honest), but out of all of them React stands out for a number of reasons. Let’s give them a quick rundown:

React is tried and tested

As React was released in long-gone 2013 and, even more importantly, has improved immensely since then, it has proved its versatility and longevity. Moreover, some of the biggest and the baddest web and mobile apps, such as Facebook, Instagram, and Discord to name but a few, are made on React. So, you can rest assured that your app won’t be React’s first rodeo and it will be more than to create a worthwhile app in the hands of a capable developer.

In its essence, React is an open-source JavaScript library. So, there is no need to learn new programming languages, as chances are that you or someone in your team is already able to write in JavaScript.

Created by Facebook, React can support humongous projects. This can be really useful if you plan to create a great big app or plan to expand your project in the future.

Being an open-source JavaScript library, React allows for code components reusage. It saves time and speeds up the app development process tremendously. This aspect of React will come into play if you plan on creating multiple applications or if you already have previous apps, with components you would like to introduce into your current project.

React has an enormous community

We all need a little help from time to time and seasoned React developers are no exception to this. The React community are great problem solvers who will be able to help you crack a tough issue, minimizing the delays in the development process.

As you can see, React has its fair share of advantages, which really consolidates its position on the market and in the hearts of many a developer. And those hearts also include ours and, hopefully, yours in the future. Now, let’s take a look at how the actual process of creating an app on React goes with a practical example.

In this example, we are going to create a simple React App with the help of Create React App and three other tools that will be required to complete the task. They are:

Immediately after that, the aptly named «awesome-react-app» folder will appear with all of the packages it requires auto-installed. After that, the first step is complete.

Now, it is time to take a look at the structure of our project. Ideally, it should look like this:

Let’s have a quick rundown of the elements contained within awesome-react-app.

· README.md is a file on the Markdown language, which contains lots of helpful tips and links to learn Create React App.

· node_modules is a folder, no comma containing all the dependency-related code that has been installed by Create React App. Leave it be and don’t go into this folder.

· package.json is “The Heart” of any project made with Node. It manages all the dependencies in the node_module folder, as well as all the scripts needed to run our awesome app.

· The .gitignore file is needed to exclude files and folders from the Git tracking.

· The public folder is used to store all the static assets of our React App, like images, svgs, and fonts, etc.

· And, last but not least, the src folder. This one is quite important, as it contains all of the source code of our app. It is also the place where we mostly work while building a React App.

Now that we know what our project contains, it is time to undertake the third step.

We start by dragging our project into the code editor and running the following command:

This command will open a new tab with our app in the computer’s default browser on localhost:3000. And, as we see, it already has some content, as in the picture below: 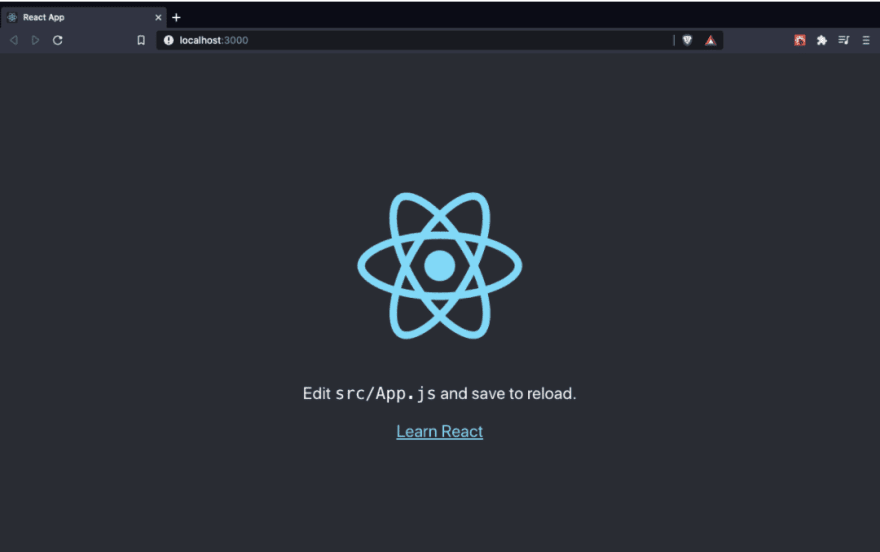 Now we can get into the src folder, where all of this app code is contained. Here we can change and modify the code to suit our purposes and goals. At this point the code will look like this:

Let’s change a couple of things here and there. For example, let’s remove the p and a tags, and add an h1 element, renaming it into the “React Posts Sharer”. After these modifications this piece of coding will look like this:

After the changes are made, we can press the Command/Ctrl + S combination to immediately see the updates made, like in the picture below, and move on to the fourth step.

The Create React App tool is equipped with a built-in testing device, called React Testing Library and can be run with the following command:

But if we run the test at this stage, it will fail due to the changes made in the previous step, the main reason being the loss of a link element, which was changed into a title one. Thus, we need to make the small adjustments listed below:

React Apps work by implementing quite a simple concept – the package ReactDOM renders the application by attaching it to an HTML element with a ‘root’ id value. We can find this element in the public/index.html file:

As we can see in the code above, our entire React App is attached to the HTML page via the div with the root id. And here is where our metadata comes into play, as by changing it in the head tags we are effectively telling search engines and potential users about our React App specifically.

Now that this app differs from others a little bit more, we can go on to the step.

6) Working with Images and Other Types of Assets

It is quite likely that your project will include some types of assets and we bet on images. So, to work with them we need to look inside our App component:

Having cleared that up, we can go to the seventh step.

First off, install the axios dependency in order to make requests to get the posts inside our illustratory post sharing React App. To do that we are going to run the following command:

Secondly, after the installation is complete, we are going to add it to the node_module folder of the app. When that is done, we need to review all the dependencies directly installed within our app’s package.json file in order to ensure that the axios dependency has been added to the right section:

If all good, we can move on to the eighth step.

There is no particular need to write all of our code inside the App component, as we can create a separate component that will be able to fetch and display the data needed at any given moment. We will create this component inside the src folder under the Posts name, and, in turn, put within it the Posts.js file.

In order to fetch the posts we need, a request from JSON Placeholder should be made, after which we will put them in a state ‘posts’ variable and map over them, so their titles and bodies: 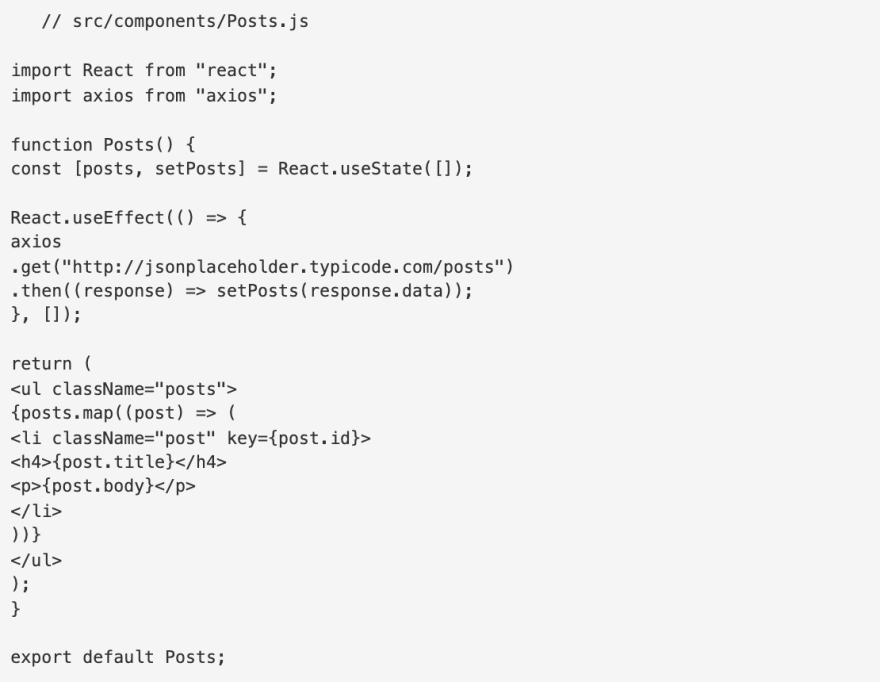 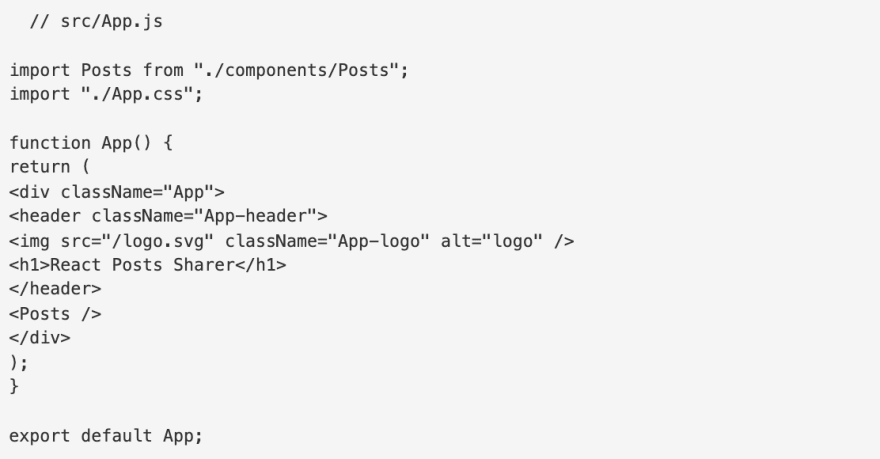 Style and design of the app are important. So, it is very helpful that the Create React App comes with pre-installed CSS support. But we are more than welcome to improve it within the App.css file that can be found inside src. 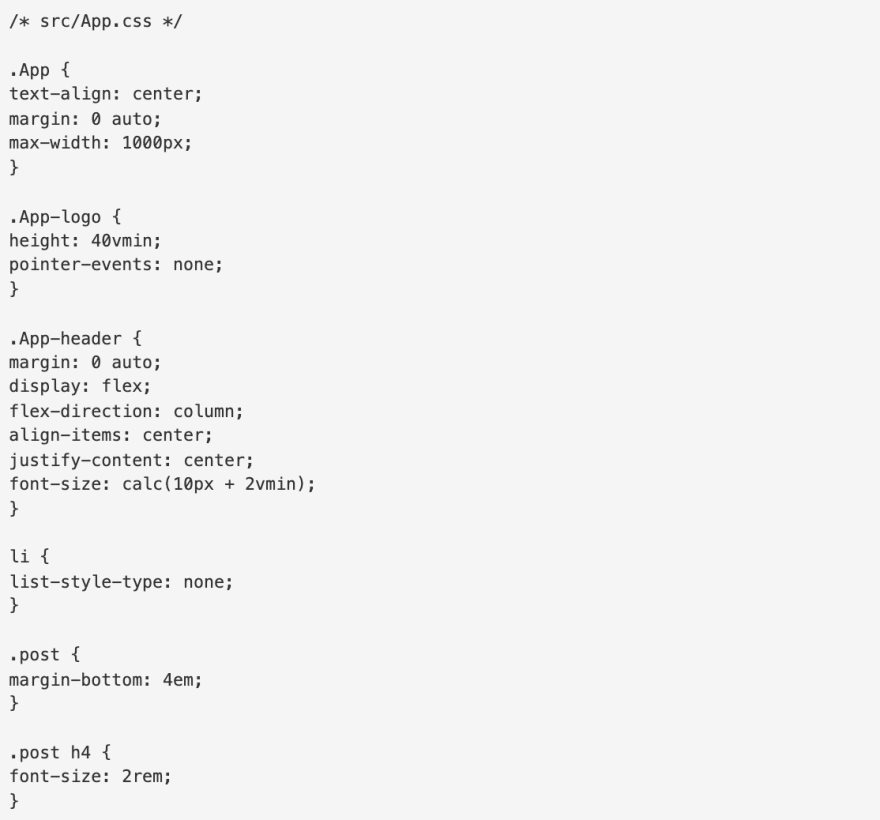 10) Building and Publishing the React App

This step is quite easy and enjoyable as we simply need to build our React App to ensure that its size will not affect its productivity. In order to do that we run the build command:

As a result, we will get the output, similar to this:

And everything is good and proper, we can finally run our built React App by using the serve npm package:

This command will start our React App, ready to be used or published on the web or deployment services. And this concludes the process of creating a web app from scratch, which, as you can see, is not an inherently difficult process by any stretch. But it is always tempting to ease your work even more. And we can show you how to create any web app faster in our video guide.

Simplifying the process with Flatlogic

What do we mean by simplifying the process as a CMS? With the help of Flatlogic’s Full Stack Web App Generator, you can do it in a jiffy. Here is a guide video made by our CTO, Alexey, on how to make a React app step by step:

Any good story starts with a title, any good React App CMS starts with a name. So, summon all of your wit and creativity and write your project’s name into the fill-in bar in Flatlogic’s Full Stack Web App Generator.

At this step, you will need to choose the frontend, backend, and database stack of your app. And, to correlate with our illustrative React App, we will choose here React for the frontend, Node.js for the back-end, and MySQL for the database.

As we’ve already mentioned, design is quite important. So don’t shortchange yourself in such a joy as a beautiful design for your app’s CMS. Choose any from a number of colorful, visually pleasing, and, most importantly, extremely convenient designs Flatlogic’s Full Stack Web App Generator presents.

Even such an important step as this one is nice and easy with Flatlogic’s Platform for creating web applications, as you can choose from and build upon a number of database schemas. And as our illustrative React App was a blog-like one, simply pick the pre-made “Blog” option and go forward on your merry way to the next and final step of this seamless CMS creation process.

In the final step, just to make sure everything is as you want it to be, you can review all of the previously made decisions and click the “Create Project” button. After a short time to generate, you will have at your fingertips a beautiful and fully functional CMS for your React App. Voila! Nice and easy!

So, let's sum up the whole process of making a full-stack application with React:

1) App creation is a simple and a clear process, which can allow you to create something beautiful and functional;

2) React is a great tool to create React apps.