The situation with Covid-19 limits the possibility of face-to-face communication. Remote work is now a reality, and the demand for video conferencing such as Jitsi Meet continues breaking records.

Could it be possible that Jitsi’s software development activity and community are on high-demand too?

👋 We are seeing high volumes of traffic from our friends all over the world (specially in Italy) and we just wanted to let everyone know that we tripled our deployment size in the busiest regions! 📈
Happy Meetings! ❤️

This post summarizes one of the analysis that my colleagues David Duran, Gerardo Aguirre and I did for our M.S. in Data Science. Following the GQM approach, we defined a clear goal and some related questions. Then, we decided the best metrics to answer those questions.

As we are trying to measure impact, we need to see potential changes. For instance, did software development activity change during covid-19 outbreak compared to last year? 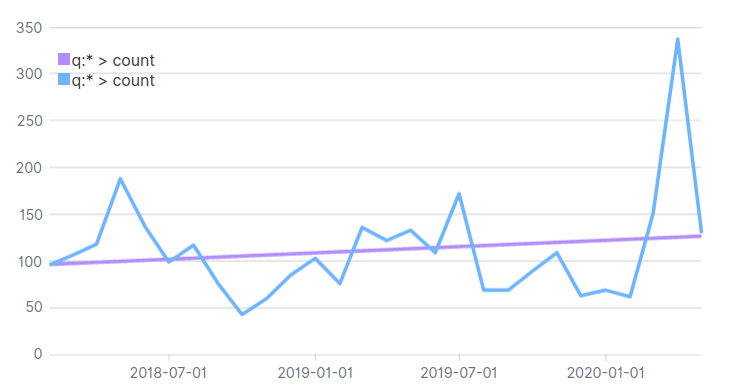 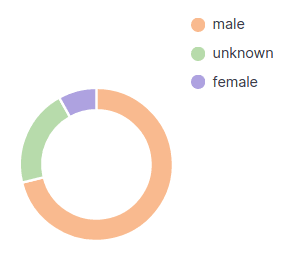 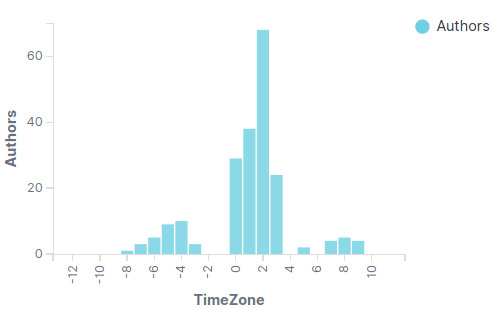 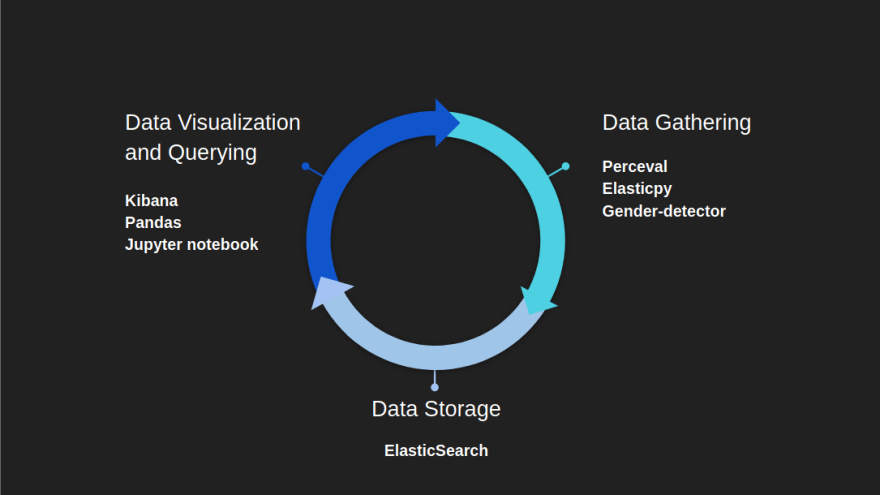 For data gathering we used an open source tool called Perceval. Perceval offers a Python module for retrieving data from repositories related to software development. It works with many data sources, from Git repositories and GitHub projects to mailing lists, Gerrit or StackOverflow.

For this specific analysis, we will just need Jitsi Git data.

If you are running Jitsi-data.py available in this Gitlab repo, make sure you have installed perceval first

You can simply use perceval git module on python with perceval.backends.core.git:

Perceval has 2 arguments for Git:

Moreover, we use Python Elasticsearch client to store data and mapping from python script to our ElasticSearch instance.

Perceval gives us raw git data with a lot of information over a period of time (we specify this thanks to datetime python package): Commit, Author, Lines added, Lines removed, Email, Commit Date and more.

However, in order to analyze contributor diversity, we need to create new fields with the data provided. That's why we add organization (based on email domains), gender (using a gender detector python package) and timezone fields (cleaning item field)

Once we generate these new fields, we create our Elasticsearch mapping, transforming item data into a new structure matching the mapping for ElasticSearch

If you are running unity-data.py script with your Elasticsearch and Kibana instance opened, you can go to your Kibana localhost (usually 5601) > management > index patterns and click on create index pattern. You should see the index name given at jitsi-data.py (by default is repo_jitsi_index_def)

We then elaborate a Kibana dashboard with the specific visualizations that fits best with our defined metrics. We called it “impact_dashoard”

At a first glance, we can see an uncommon behavior on Jitsi’s activity since February 2020: 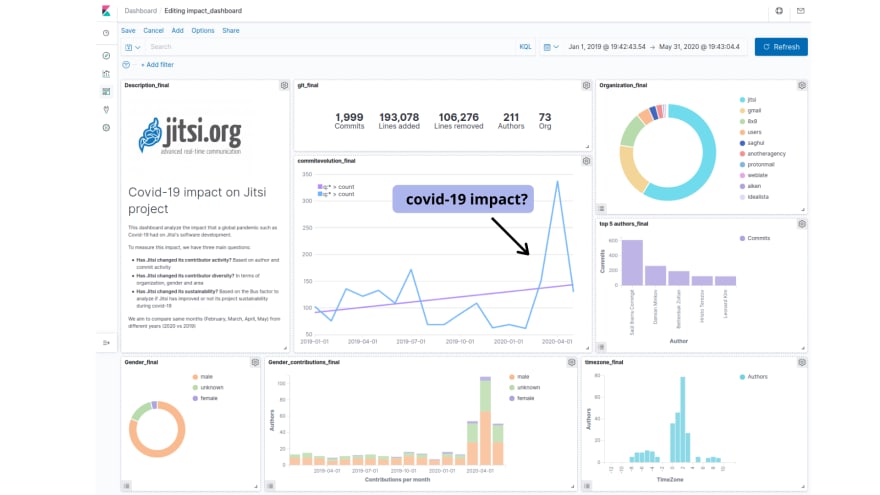 And when comparing 2019 period with 2020, results are also quite interesting:

Image below highlights major changes regarding contributor’s diversity and activity: 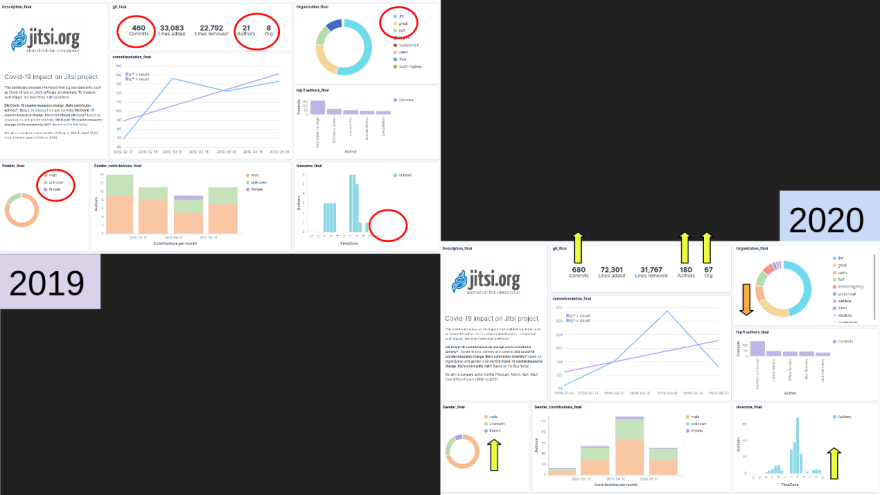 We can see that:

Contributor’s Activity increased: there is an increase in commit activity, lines added and removed, authors and organizations involved on Jitsi’s software development

Contributor's Diversity increased: It’s interesting to see that women activity was under 1% last year and since covid-19 started, it increased to 8%. Still a low number, but is a good indicator.

Also, we see some author activity in Asia that didn’t existed before.

Disclaimer: there are “unknown” data that our gender detector couldn’t guess. The main reason is because some Jitsi’s developers have non-occidental characters and our gender detector is optimized for occidental names. We did an exhaustive cleaning for the most relevant names though, reducing our “unknown” data, but we couldn’t erase it completely.

What about Community Risk?

To answer our last question and metric, we work on a query using Jupyter Notebook.

The Bus Factor for developers isn’t something new: It is the minimum number of team members that have to suddenly disappear from a project before the project stalls due to lack of knowledgeable or competent personnel. In other words: 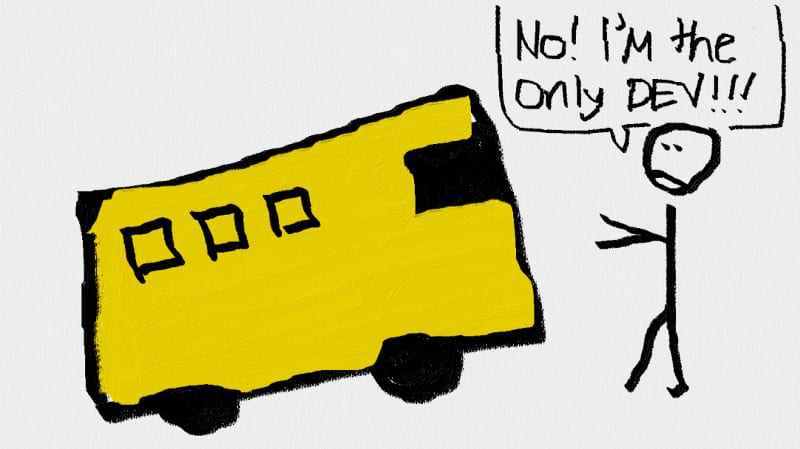 Our Bus Factor approach for our specific goal answers the question Which is the minimum number of contributors needed to make the 50% of git code on Jitsi?

As a result, we get that in 2019, Jitsi only needed 2 developers to make the 50% of git code while in 2020 Jitsi needs at least 9 developers. This fact is indeed good for Jitsi’s project health! 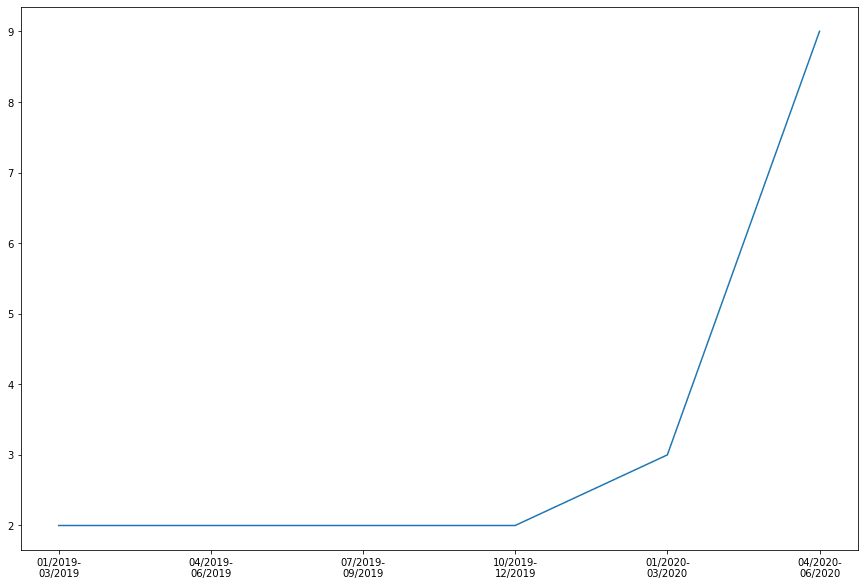 You can see Jupyter Notebook query in our GitLab repo

This is just a very introductory analysis to measure covid-19 impact on Jitsi. Of course, we can improve a lot of things. Some future work might be:

And last but not least: Correlation does not imply causation. We don’t have all the domain knowledge Jitsi maintainers and community specialists might have. A relationship between Covid-19 and contributor's activity might be just coincidence

Once suspended, anajsana95 will not be able to comment or publish posts until their suspension is removed.

Once unsuspended, anajsana95 will be able to comment and publish posts again.

Once unpublished, all posts by anajsana95 will become hidden and only accessible to themselves.

If anajsana95 is not suspended, they can still re-publish their posts from their dashboard.

Once unpublished, this post will become invisible to the public and only accessible to Ana Jimenez Santamaria.

Thanks for keeping DEV Community 👩‍💻👨‍💻 safe. Here is what you can do to flag anajsana95:

Unflagging anajsana95 will restore default visibility to their posts.