I keep forgetting to take breaks while working on my laptop, so I've decided to make a reminder app. I'm new to Python, so it will work in command-prompt mode. Yep, no graphical interface for now, but I might add it later. Here we go ✨

The app will be super simple:

Here is a Python command that I'll use:

Import tells Python to load a module with the tools that we'll need for this. Time is the name of the module. We’ll only need a method called ‘sleep’ from that module. I'll use it to pause the program for a certain amount of time.

Step 1: Asking for a reminder

First you need to ask a user (in this case, yourself 🙃) and get a response. In a perfect world, we’d want a code like this:

reminder = user.ask("What shall I remind you about?")

But let's start with a simple implementation, so I’ll go with some built-in commands:

print("What shall I remind you about?")

print sends out a text message into Python’s default output (which in our case is command line).

Since we're building a reminder for work, let's calculate time in minutes:

The second line means ‘Take whatever the user typed, think of it as a number, put it in memory under the name “local_time”.

We have a number of minutes that our app needs to wait before reminding us. But Python’s time.sleep() method requires seconds, not minutes. So we need to convert minutes into seconds:

Now we’ll need that time module that we loaded in step 0:

Remember that the reminder text is stored in memory under the name ‘text’? It’s time to use it:

This means: take whatever is in the memory under ‘text’ and send it to output.

If you input this into your Jupyter notebook and run (Shift + Enter), you’ll see your program in action: 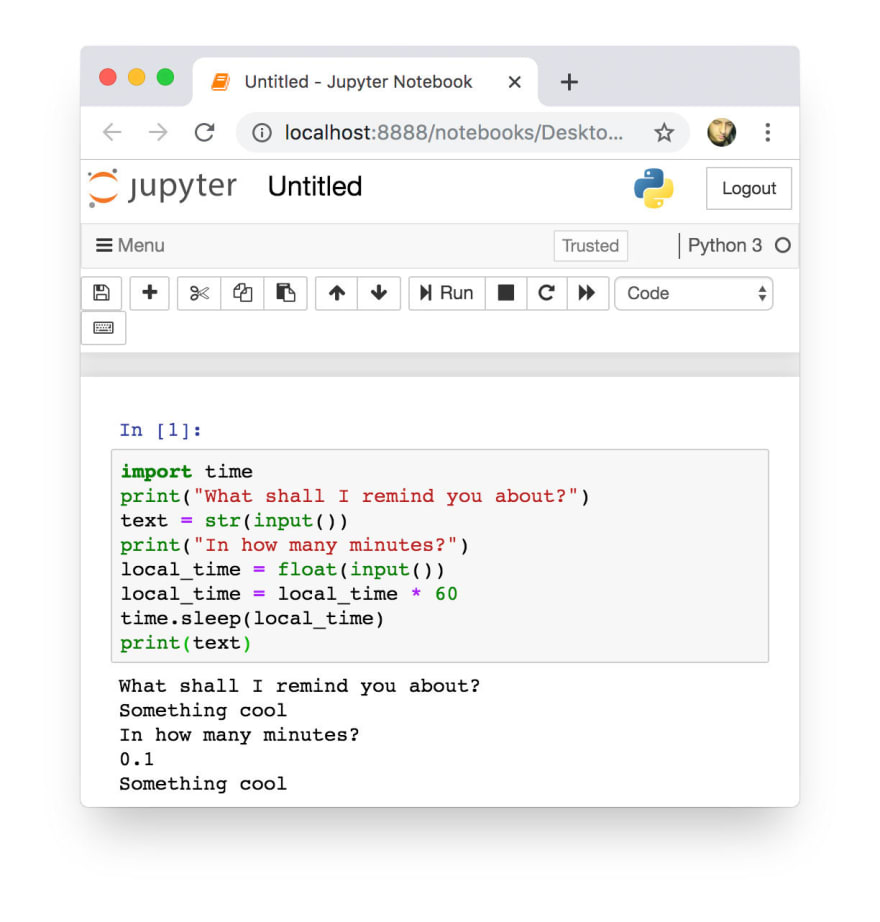 That's it for now, but I might add the graphical interface to it later. Would love to hear your comments on this!

Meanwhile, if you're bored and want to learn Python through building practical things, check out our course at Practicum. It has 20 hours of free lessons 🚀

What can a well-planed schema do for your project?