Before We Get Started

This article is not intended to be a tutorial on routing in Angular. If you are new to Routing in Angular then I highly recommend you check out one of the the following resources:

The following represents a pattern that I’ve developed at my day job after building several enterprise Angular applications. While most online tutorials do a great job laying out the fundamentals, I had a hard time locating articles that showed recommended conventions and patterns for large and scalable applications.

With this pattern you should have a clean and concise organization for all routing related concerns in your applications.

For context, this article assumes you are using the following version of Angular:

The official Angular docs recommend creating a full-blown app-routing.module.ts for your top-level routing. I have found this extra layer to be unnecessary in most cases.

Let’s go with the following approach:

HOT TIP: Only register top-level routes here, if you plan to implement feature modules, then the child routes would live underneath the respective feature.routes.ts file. We want to keep this top-level routes file as clean as possible and follow the component tree structure.

Your updated app.module.ts will look similar to the following:

In similar fashion to how we constructed the app.routes.ts we will create a feature.routes.ts to list out the individual routes for this feature module. We want to keep our routes as close to the source as possible. This will be in keeping with a clean code approach, and having a good separation of concerns.

Your updated feature/feature.module.ts will look similar to the following:

An example of a feature.routes.ts file with child route(s) may look like the following:

Lazy loading is the concept of deferring load of code assets (javascript, styles) until the user actually needs to utilize the resources. This can bring large performance increases to perceived load times of your application as the entire code set doesn’t have to download on first paint.

Angular provides a nice way to handle this with the loadChildren option for a given route. More information can be found in the official Angular docs.

Once you’ve created your app.routes.ts and *.routes.ts files, you need to register any feature modules that you want to load lazily.

Update the AppRoutes array in the app.routes.ts file to include a new route the feature:

By adding the above route to the array, when the user requests /feature in the browser, Angular lazy loads the module using the path given and then automatically registers any routes defined in the feature.routes.ts FeatureRoutes array using the RouterModule.forChild import.

For each additional feature module, you would add another item to the AppRoutes array. If you have multiple features, it might look something like the following:

Here are a few tips to keep your router guards organized. These are just guidelines, but I have found them to be very helpful.

Guards should use the following naming convention:

Each part being identified as:

An example of an Auth Guard that is attached to the CanActivate function would be named as follows:

Notice the underscore "_" prefix on the folder, this is just for sorting purposes in the editor. I always want these folders to show at the top. I do the same for _models and _services.

Organize all top-level guards under a folder named src/app/_guards. I have seen applications where guards are stored in the top level directory. I am not a fan of this approach as it can get messy if you end up with more than a few guards.

The jury is still out on whether or not using barrel exports is officially considered a "best practice" or even supported by the Angular style guide. However, I am a big fan of the clean organization this provides. This method is offered as a suggestion.

Make sure that src/app/_guards has a nice and clean index.ts barrel export. Barrel exports are simply index.ts files that group together and export all public files from a directory. An example is as follows:

An example application with a _guards directory would look as follows: 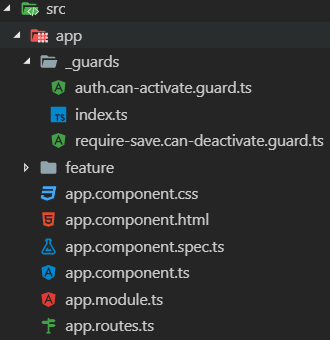 If you have guards that are only used in a particular FeatureRoutes array, then store these routes underneath a folder named _guards underneath your feature folder. Make sure to follow the same naming conventions defined above, as well as barrel exporting.

An example feature directory with _guards would look as follows:

A completed application structure should look something like the following: 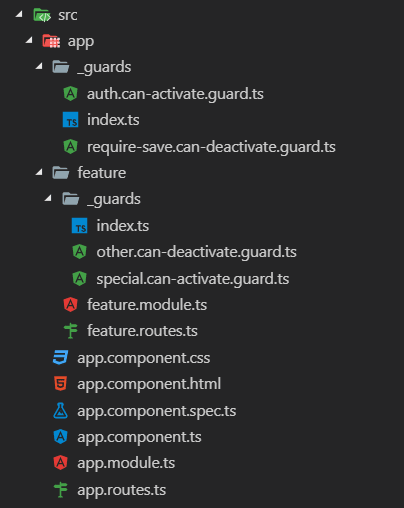 I have created a demonstration repository on GitHub. Feel free to fork, clone, and submit PRs.

It’s important to remember that I have implemented these best practices in several “real world” applications. While I have found these best practices helpful, and maintainable, I do not believe they are an end-all be-all solution to organizing routes in projects; it’s just what has worked for me. I am curious as to what you all think? Please feel free to offer any suggestions, tips, or best practices you’ve learned when building enterprise Angular applications with routing and I will update the article to reflect as such.

This is where we write about all things Angular. It's meant to be a place for Angular community and people interested in Angular and the Angular ecosystem.
code of conduct - report abuse

Introduction to TDD: What it is and why it is important