JavaScript running in the background, without affecting the performance of the page.

Are you a person who just started with HTML/CSS or someone who wants to have an in-depth knowledge of the advanced features of HTML? Then you are in the right place. So grab a cup of coffee and enjoy the first part of our HTML series, HTML Web Workers in Depth.

Consider a situation where you need to handle UI events or a query that processes large amounts of API data or manipulates the DOM. What does your JavaScript do then? JavaScript will hang the browser if the CPU utilization is very high. JS runs in a single-threaded environment which means multiple scripts cannot run at the same time. So that means function B cannot be executed until function A is finished. meanwhile, during this process, the HTML page becomes unresponsive until the script is finished.

*We can mimic the ‘concurrency’ concept by using techniques like **setTimeout(), setInterval(), XMLHttpRequest **and event handlers. All of these features run asynchronously and doesn’t block anything but these doesn't necessarily mean concurrency.*

wiki: concurrency is the ability of different parts or units of a program, algorithm, or problem to be executed out-of-order or in a partial order, without affecting the final outcome*.*

And there comes web worker to the rescue! A web worker is a JS script that runs in the background in a separate thread i.e. it runs independently of other scripts, without affecting the performance of the page. We can continue to do browsing, mouse events etc. uninterrupted, while the web worker runs long scripts in the background. This results in the web page being responsive.

Note: Even though, Web Workers are relatively heavy-weight background scripts, they are not intended to be used in large numbers. 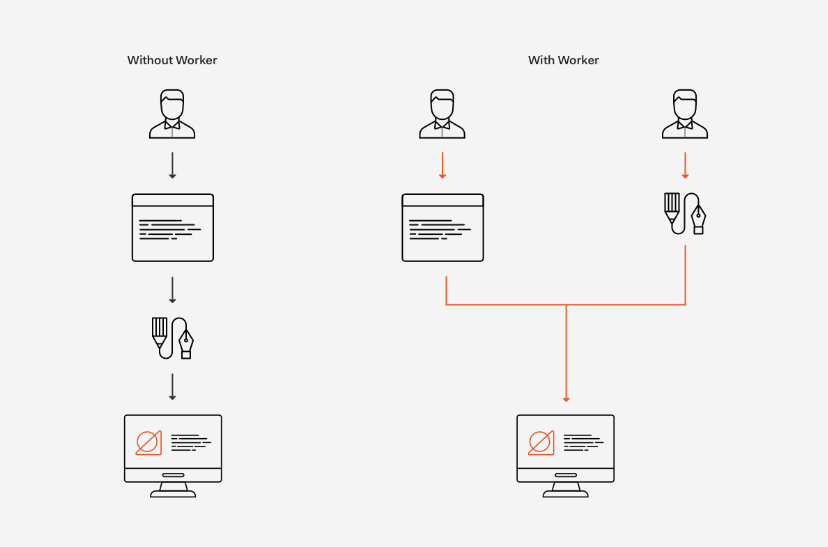 Why to use JavaScript Web Workers?

In HTML5 Web Workers are of two types:

The dedicated worker can be accessed by only one script which has called it. The worker thread ends as its parent thread ends.

The shared worker can be shared by multiple scripts and can communicate using a port. Shared workers can be accessed by different windows, iframes or workers.

A dedicated worker is only accessible from the script that first spawned it, whereas shared workers can be accessed from multiple scripts.

A worker is an object created using a constructor (e.g. Worker()) that runs a specific JavaScript file.

Now, if the specified javascript file exists, the browser will spawn a new worker thread, which will work asynchronously. If the path to the URL returns a 404 error, the worker will fail silently.

Listener to the web worker (onmessage( ))

The main thread listens to the worker with onmessage event. The messages can be sent and received from different threads to each other. For example:

So the result will be :

Once the Web Worker is spawned, communication between a web worker and its parent page is done using the postMessage() method.

When a web worker object is created, it will continue to listen for messages (even after the external script is finished) until it is terminated.

To terminate a web worker, and free browser/computer resources, use the terminate() method:

If you set the worker variable to undefined after it has been terminated, you can reuse the code:

Workers may spawn more then one worker if they wish. These are called subworkers. These subworkers must be hosted within the same origin as the parent page. Also, the URLs for subworkers should be relative to the parent worker’s location rather than that of the owning HTML page. This makes it easier for workers to keep track of where their dependencies are.

If the application needs to use multiple JavaScript files, we can import them using a global function, importScripts() method which takes file name(s) as argument separated by a comma as follows −

The browser loads each listed script and executes it. Any global objects from each script may then be used by the worker. If the script can’t be loaded, NETWORK_ERROR is thrown, and subsequent code will fail.

This demo uses a worker script (script1.js), which imports another simple script using importScript that defines a variable, a.

Even though importScripts is sync, it imports the variable from 2nd script into the global scope, not the current function scope. The local variable a stays “world”, instead of being updated to “Hello”.

Note: In the context of a worker, both self and this reference the global scope for the worker.

Web Workers and the DOM

Since web workers are in external files, they do not have access to the following JavaScript objects:

Spawning a new shared worker is pretty much the same as with a dedicated worker, but with a different constructor name. It uses SharedWorker object.

One big difference is that with a shared worker we have to communicate via a port object . An explicit port is opened which the scripts can use to communicate with the worker . The port connection needs to be started either implicitly by use of the onmessage event handler or explicitly with the start() method before any messages can be posted.

Calling start() is only needed if the message event is wired up via the addEventListener() method.

Sending messages to and from a shared worker

Now messages can be sent to the worker as before, but the postMessage() the method has to be invoked through the port object.

Now, on to the worker, it is a bit more complex here as well in worker.js:

We use the ports attribute of this event object to grab the port and store it in a variable.

Data passed between the main page and workers is copied, not shared. Objects are serialized as they’re handed to the worker, and subsequently, de-serialized on the other end. The page and worker do not share the same instance, so the end result is that a duplicate is created on each end. Most browsers implement this feature as structured cloning.

With Transferable Objects, data is transferred from one context to another with zero-copy, which vastly improves the performance of sending data to a Worker. For example, while transferring an ArrayBuffer from the main app to the worker, the original ArrayBuffer is cleared and no longer usable. Its contents are transferred to the worker context.

sub workers: Workers have the ability to spawn child workers. This is great for further breaking up large tasks at runtime.

Inline workers: With Blob(), you can "inline" your worker in the same HTML file as your main logic by creating a URL handle to the worker code as a string:

Thread safety: Since web workers have carefully controlled communication points with other threads, it significantly decreases the chance of concurrency problems. There’s no access to non-thread-safe components or the DOM. And you have to pass specific data in and out of a thread through serialized objects.

Restrictions with local Access: Due to Google Chrome’s security restrictions, workers will not run locally (e.g. from file://) in the latest versions of the browser. So to run the app from the file:// , we need to run Chrome with the --allow-file-access-from-files.

Same Origin Considerations: We cannot load a script from a data: URL or javascript: URL, and an https: page cannot start worker scripts that begin with http: URLs.

Although the concept might not sound very interesting to most of the people, it’s very useful to understand the concepts of web workers. Here are a few use cases where web workers will work like a charm

ANISHA SWAIN
Anisha is from Bengaluru, India where she works as a Software Engineer in the Performance and Scale team of Red Hat. She has more than 1 2years of experience as an Intern and Full-time Engineer
Am I a loser?
#javascript #webdev #motivation #interview
Design Heuristics Evaluation
#ux #beginners #webdev #design
Thumb rule for Designing UX
#ux #beginners #webdev #design

Once suspended, anishaswain will not be able to comment or publish posts until their suspension is removed.

Once unsuspended, anishaswain will be able to comment and publish posts again.

Once unpublished, all posts by anishaswain will become hidden and only accessible to themselves.

If anishaswain is not suspended, they can still re-publish their posts from their dashboard.

Once unpublished, this post will become invisible to the public and only accessible to ANISHA SWAIN.

Thanks for keeping DEV Community 👩‍💻👨‍💻 safe. Here is what you can do to flag anishaswain:

Unflagging anishaswain will restore default visibility to their posts.