What's a design pattern in software engineering? It's a general repeatable solution to a commonly occurring problem in software design. In this article, we'll be looking at one of such common design patterns and see how it can be put to use in real world applications.

This pattern is referred to as Publish-Subscribe or PubSub. Let's start with the overall notion behind this pattern before writing some code. 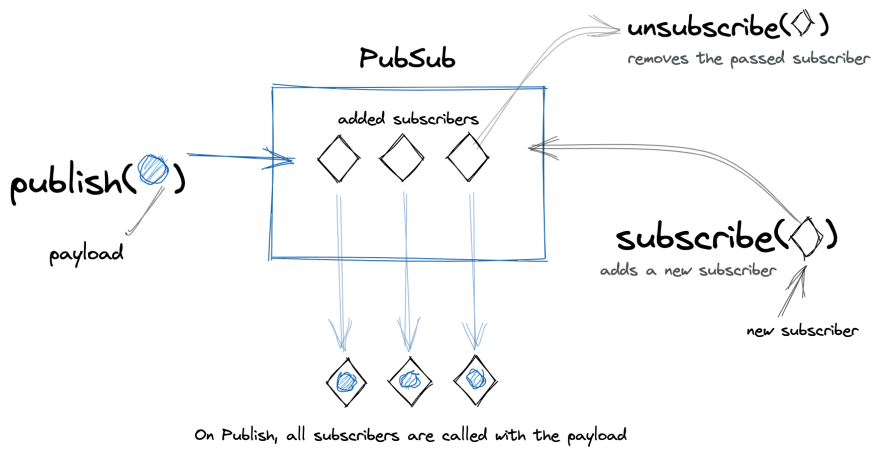 The image above describes the general idea behind this pattern:

Looking at the points above it's pretty straightforward to come up with a simple implementation:

Let's add a bit of error handling to this implementation:

We can use this implementation as follows:

Now, elsewhere in the application, we can publish and subscribe using this instance:

Is it useful in real applications?

Yes. In fact, there are many libraries that use it under the hood and you may not have realized it so far. Let's take the example of the popular state management library for ReactJS - Redux. Of course, its implementation is not as simple as ours, since it's been implemented to handle many other nuances and use-cases. Nevertheless, the underlying concept remains the same.

In summary, all react components using connect() method act as subscribers. Any component using dispatch() acts as the publisher. And that explains why dispatching an action from any component causes all connected components to rerender.

This article has been originally published at StackFull.dev. If you enjoyed reading this, you may want to opt for my newsletter. It would let me reach out to you whenever I publish a new thought!

Easy way to Create your own API for FREE

Once suspended, anishkumar will not be able to comment or publish posts until their suspension is removed.

Once unsuspended, anishkumar will be able to comment and publish posts again.

Once unpublished, all posts by anishkumar will become hidden and only accessible to themselves.

If anishkumar is not suspended, they can still re-publish their posts from their dashboard.

Once unpublished, this post will become invisible to the public and only accessible to Anish Kumar.

Thanks for keeping DEV Community 👩‍💻👨‍💻 safe. Here is what you can do to flag anishkumar:

Unflagging anishkumar will restore default visibility to their posts.