Topological sort is an algorithm I wish I had programmed in my brain. So many tasks to do every day, with so much dependencies among them. It would've definitely improved my productivity without being dependent on any external tool.

The example of chicken Biryani is chosen just for making it sound fun. I have tried to generalize the steps and removed details. Steps were chosen from the first link Google gave me. There are multiple variations of this recipe. If you don’t know what Biryani is, visit here. If you ever decide to cook some Biryani, this is the post you shouldn't be referring to. I guess you know what happens when we start development with vague requirements, right?

Suppose we were making Biryani and we wanted someone to tell us the linear ordering of steps in its recipe i.e. a sequence of steps that can be followed by taking one step at a time. Steps in making Biryani have interdependence among them, just like any other recipe. The generalized process of cooking chicken Biryani(from the link that I used) is outlined below-

This problem sounds so trivial, but real-world applications of this algorithm can include hundreds of steps(vertices) and much more complex dependencies. For the purpose of this post, we will keep it short and easy to understand.

There are multiple topological sorting algorithms to approach this problem. One of these algorithms is Kahn's algorithm, which is what I have chosen to explain in this post.

The algorithm works in the below steps:

Pseudocode can be written as:

Alright then, our Biryani making problem can be solved by algorithm above. Let's put the steps in graph form: 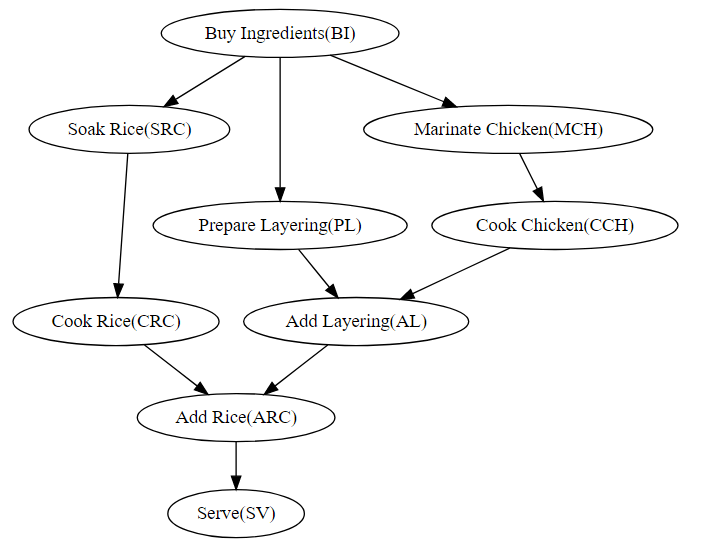 I have depicted the processing for above graph in below table. If it's hard to read, same has been uploaded in the repository linked below.

Topological sort in C# for sorting steps in making Biryani. This is supplementary implementation for the blog that i have written - https://dev.to/ankitutekar/understanding-topological-sort-by-cooking-some-biryani-43c3

The core of the topological sort algorithm is in the file below:

Some facts about topological sort:

Feel free to ping me if you have any doubts. Also, do try Biryani at least once!

Once suspended, ankitutekar will not be able to comment or publish posts until their suspension is removed.

Once unsuspended, ankitutekar will be able to comment and publish posts again.

Once unpublished, all posts by ankitutekar will become hidden and only accessible to themselves.

If ankitutekar is not suspended, they can still re-publish their posts from their dashboard.

Once unpublished, this post will become invisible to the public and only accessible to Ankit Utekar.

Thanks for keeping DEV Community 👩‍💻👨‍💻 safe. Here is what you can do to flag ankitutekar:

Unflagging ankitutekar will restore default visibility to their posts.