Ghost is a publishing-focused platform. It powers many writing-focused websites such as the cloudflare blog, troyhunt.com and the Mozilla VR blog.

As the code is fully open source on github, I performed a security audit of the application and found an unauthenticated reflected XSS in the Subscribe feature.

This post will be a technical walk through of the vulnerable code which caused this XSS.

The subscribe page of Ghost is a feature which needs to be manually applied via the labs tab in the blog settings.

More information about the feature is available here.

The subscribe page was vulnerable to a reflected XSS as two of the POSTed variables can be reflected:

Here is a POC form which used to alert the domain, on demo.ghost.io:

The vulnerable code is under /core/server/apps/subscribers/lib/helpers/subscribe_form.js:46

The SafeString function is from HandleBars, and enable the user to write raw (unsafe) HTML to the document.

HTML escaping - Handlebars
Handlebars will not escape a Handlebars.SafeString. [...] In such a circumstance, you will want to manually escape parameters.

In our case, we are passing the result of the makeHidden function:

Where template.input is a Lodash template, and no parameters are sanitized.

For this vulnerability, the extras parameters is tainted with 'value=' + root.subscribed_url, which lets us close the input tag and inject our own HTML code.

The reason why Ghost is treating subsribed_url and subscribed_referrer as safe variables is the interesting part of this attack.

To perform the required trick, we need to understand how Ghost and its web server, Express, handles a request.

Before rendering a page, ghost will give a route a list of method to execute, each one sending its result to the next one.

Here is the pertinent code, from /core/server/apps/subscribers/lib/router.js:98:

The arguments given to each methods are the result, or callback arguments, of the previous method.

If the argument is of type Error, instead of continuing with the next method, it will use the errorHandler method, which will then display an error page.

Here is the errorHandler function:

As you can see, the get, post and error routes end up with the same _renderer method, which does render the same template.

The subscriber form, which is the template used by all states, has two states:

It is available under /core/server/apps/subscribers/lib/views/subscribe.hbs:47-68:

Here is the workflow visualized: 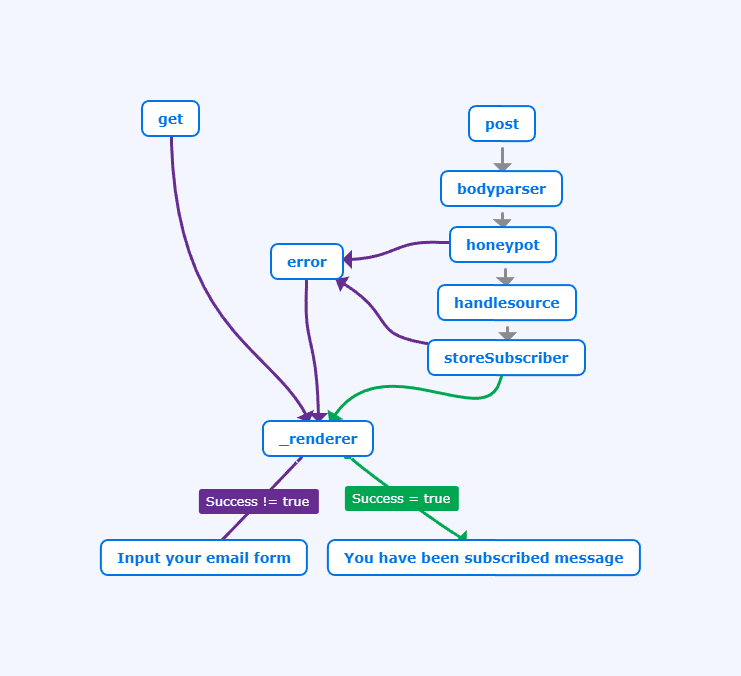 As our tainted parameters are rendered as hidden inputs in the form, we need to trick the server into rendering the input form while using our POST values.

The condition for rendering the vulnerable parameters is the success variable, which checks if any errors occurred when saving the new subscriber.

When sending a post, the first method called is bodyParsed.urlencoded, which converts our body to a JavaScript object.

The second method is honeyPot, and is essential to this attack.

As the form has a hidden confirm parameters, it will ensure the parameter is present and that its value is empty. I presume this is to prevent automated bots to fill the form with junk too frequently.

If those conditions are not met, it will call next with an error message, Oops, something went wrong!.

As this is an error object, express will stop calling the next methods and instead use an errorHandler.

If we didn't trigger this error and used the normal workflow, the handleSource function would be called, and perform the following logic:

As you can see, it would overwrite the subscribed_url and subscribed_referrer with a sanitized version of the posted values.

As we did not call this method, and instead took the honeypot bait, our values for subscribed_url are not sanitized.

We can therefore render the correct part of the form when giving a value to the 'confirm' input, as an error will be sent, which sets success variable to false.

As the same _renderer method is used for all three scenarios, which are get, post and errors, it does provide the request body to the template, even if we're in an error scenario.

Once we get in the rendering code of our form, subscribe_form.js, our context now has the previously thrown error, but also all of our unsanitized posted variables.

Combining this with the vulnerable template and we now have all the required steps for a reflected XSS!

Causing an error by taking the honeypot bait does not strip or sanitize our variables, unlike the regular route.

This leads the tainted variables being printed in the page, and causes a reflected XSS!

Note here that I never received an update since they acknowledged the ticket got lost, and still didn't hear from them to this day.

Also note that Ghost does not have a bug bounty program, so I did not receive a reward for this vulnerability.

The patch for the vulnerability is the following:

Ghost added the sanitizeURL validation on the errorHandler.

Where isEmptyOrUrl checks if the URL is valid via the validator npm package, where ghost checks the isEmpty part, and then call the isUrl method of validator if it's not empty.

And you would be right!

Pretty much everything after the hash is technically a valid url, and can contain spaces and other symbols.

This does not work in this case as the validator package does not allow the <> characters.

The relevant part of the check is here:

The /[\s<>]/ regex ensures that we don't send a less than or greater than symbol in the url, wherever it may be.

What we can do however it add spaces, quotes and other characters in the value, to add attributes to the tag.

If we have a look at the HTML in which our content is injected:

It is trivial to escape the value attribue. As there are no quotes around the value, adding a space works.

If there were quotes, as our content isn't sanitized for attribute position, we could add a quote and keep on going.

The reason why it is not a complete XSS like it previously was is because of the input type.

With a regular input, we could modify it to have this form:

Which would trigger the alert. But on a hidden input, as it's hidden we can't focus on it.
This makes it a lot harder to have an XSS, and the resulting XSS will require user actions unlike the previous versions.

Garet Hayes made a great blog post on the PortSwigger blog: XSS in hidden input fields, where setting an accesskey attribute and triggering it does launch the onclick event, even though the event is hidden.

Here is a proof of concept:

With this input, when the user presses ALT+SHIFT+X or CMD+ALT+X on OSX, the alert will launch.

This does make it almost worthless as an input since there is no chance a user will manually press those keys, but it's still a reflected XSS.

I have notified ghost of this bypass as well as the recommended solution on November 19th, but never received an answer.

Unlike other big CMS such as WordPress and Joomla, as Ghost is publisher-focused, most visitors on the website won't have an account.

On the other CMS, there are plugins to create new features such as making an e-commerce website, allow comments or write your own p osts, which allows the users to create accounts.

This limits the attack scope to public content, which makes it a lot more secure by default, as you can't access most of the internal API as a guest.

Overall, while the security team did take a very long time to fix this and using a weak solution, the security of the application from an external attacker is pretty good as the scope is very limited.

Follow me on Twitter if you want to learn more about security and keep up to date regarding my publications!

The next post will be about multiple stored XSS on Dev.to, which was caused by a logic bug in the publication platform.

If you can provide invitation for private programs on any platform, feel free to send me an invite! You can contact me via twitter, DM's are open.

CVE vulnerabilities on Google Chrome prior to releases around on Dec. 2022

Once suspended, antogarand will not be able to comment or publish posts until their suspension is removed.

Once unsuspended, antogarand will be able to comment and publish posts again.

Once unpublished, all posts by antogarand will become hidden and only accessible to themselves.

If antogarand is not suspended, they can still re-publish their posts from their dashboard.

Once unpublished, this post will become invisible to the public and only accessible to Antony Garand.

Thanks for keeping DEV Community 👩‍💻👨‍💻 safe. Here is what you can do to flag antogarand:

Unflagging antogarand will restore default visibility to their posts.