A Merkle tree is a tree founded by Angela Merkel (Chancellor of Germany). Wait...that is something different.🙃

A Merkle tree is nothing but another data structure like a binary tree but with the addition of hash pointers.

Now, you may ask, what is a hash pointer?

The Hash pointers simply point to a place where some data can be stored after being hashed with a cryptographic function to make the data secure. The best example that uses hash pointers is blockchains.

The below diagram explains the structure:

Let's now see the use cases. There are three major systems that use the Merkle tree as one of their implementations:

Let's have a look into one of the use cases of Merkle trees which is Amazon DynamoDB:

Amazon's Dynamo DB is one of the NoSQL databases which consists of the many nodes in a cluster and these nodes are continuously performing consistent hashing which is a special kind of hashing such that when the hash table is resized only K/n keys need to be remapped where 'K' is the number of keys and 'n' is the number of slots, unlike most traditional hash tables where a change in a number of slots causes all keys to be remapped.

Now in order to do consistent hashing, we require data migration and at the same time. We also want to minimize this data migration.

What do think will help in this case? 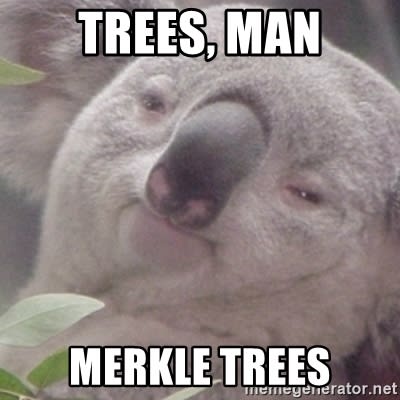 This can be achieved using Merkle trees while checking for inconsistencies among replicas (Merkle trees minimizes the amount of data transfer for synchronization).

Each node maintains a separate Merkle tree for each key range (the set of keys covered by a virtual node) it hosts. This allows nodes to compare whether the keys within a key range are up-to-date. In this scheme, two nodes exchange the root of the Merkle tree corresponding to the key ranges that they host in common.

Subsequently, using the tree traversal scheme described above the nodes determine if they have any differences and perform the appropriate synchronization action. The sole disadvantage with this scheme is that many key ranges change when a node joins or leaves the system thereby requiring the tree(s) to be recalculated.

Time Complexity of the various operations