Are you still monitoring your containers in tons of console windows or passionate about knowing dozens of terminal commands? There are a couple of nice Graphical User Interfaces (GUIs) for Docker, that can make your life much simpler and increase your performance. Let’s select which one will suit you best.

Portainer has full support for the following Docker versions:

Partial support for the following Docker versions (some features may not be available):

You can test a live demo (admin / tryportainer).

Portainer can be easily installed with Docker on a standalone Linux/Windows server/swarm cluster. A full-featured platform allows you to work with different endpoints.

You can manage registries, networks, volumes, secrets, images, and containers. You are also able to save your configuration (you can find examples of alertmanager and Prometheus at the live demo), and configure a Docker Swarm and stacks. Portainer can check if the container is healthy.

Apart from the basic operations you need to work with containers like run, stop, resume, kill, remove, etc., you can also inspect containers, see logs, visualize basic stats, attach and open the console for certain containers.

As a plus, you also get a role-based access system and the ability to install extensions.

Conclusion: a powerful GUI instrument that can be used for a team project with local or remote containers, Docker stack or Docker Swarm. However, Portainer may turn out to be too much for your generic needs. The interface may also be inconvenient especially if you use many projects at the same time. 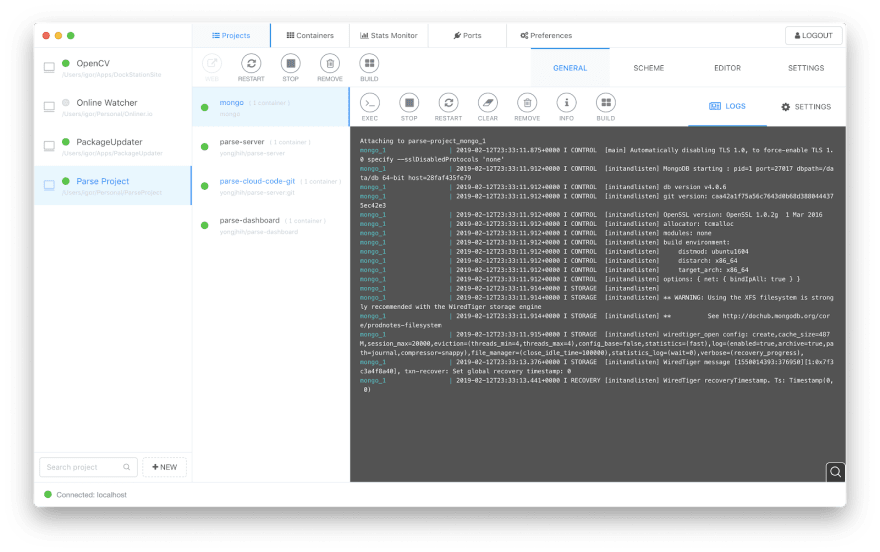 DockStation is a free full-featured desktop app which allows you to work with docker and docker-compose. It can help generate a clean and native docker-compose.yml file which can be used even outside the application, using the native Docker Compose CLI commands. It also helps you to manage your containers and services (both remote and local), and monitor them (logs monitoring, searching logs, grouping, running tools and getting container info). There are additional tools available for common, multiple and single monitoring of container resources.

With DockStation, you can easily track CPU, Memory, Networks I/O, Blocks I/O usage and open ports. All work can be organized into projects, where you can check the status of each container, build a graphical scheme that visualizes each image in the project and relations between them. As an additional takeaway, DockStation works like charm with Docker Hub. 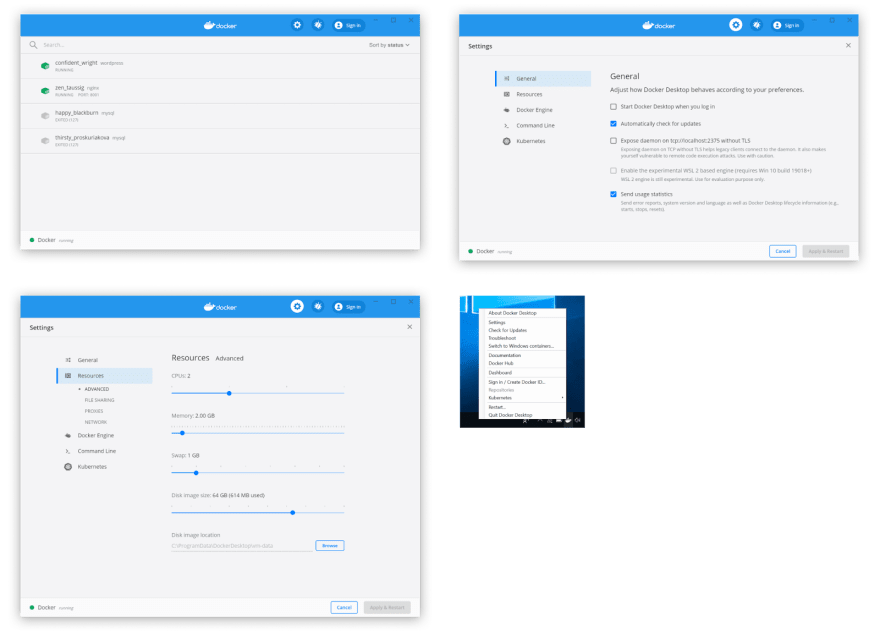 This tool gives you the ability to set resource limits for your Docker (memory, CPU, swap and disk image size, file sharing, proxies, and network), configure Docker engine, command line and Kubernetes (you can configure deployment to a Kubernetes from Docker Desktop).

Using dashboard, you can use not only basic container operations, but can also see logs, basic stats and inspect your container. All of this can be called through the contextual menu or from the indicator in the status bar. 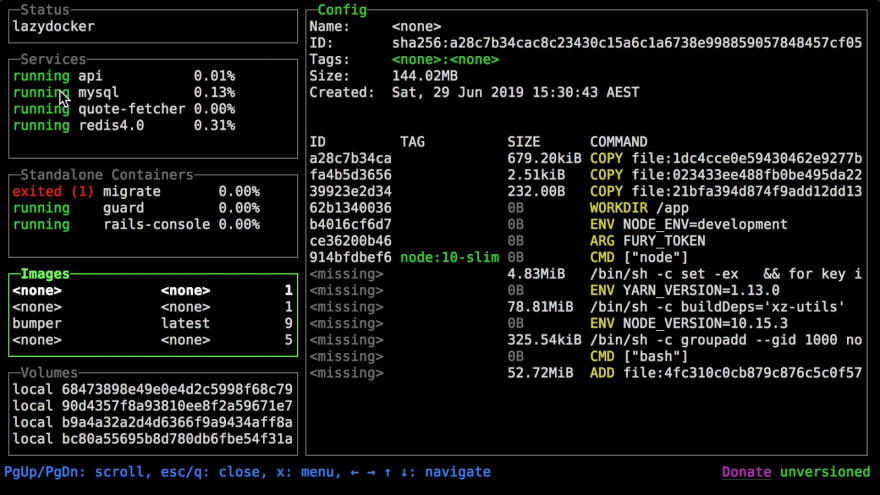 Lazydocker can be used through both mouse and keyboard. For some elements, the contextual menu is available, where you can find all popular commands with shortcuts. The good news is that you not only have basic commands to manipulate containers, basic stats, logs, and inspections; you can use also graphical visualization of main metrics (by default CPU and memory usage) and ‘top’ of processes. Additionally you can also configure this section for almost all the metrics you want.

For the selected images, you can see commands from the Dockerfile that are executed when they run, and the inherited layers. Cleaning of unused containers, images, volumes (prune) is also provided, apart from the liberty of modifying available commands and adding new ones.

As a result, we have a minimalistic terminal interface that can be really helpful with several 'not so complicated' projects. 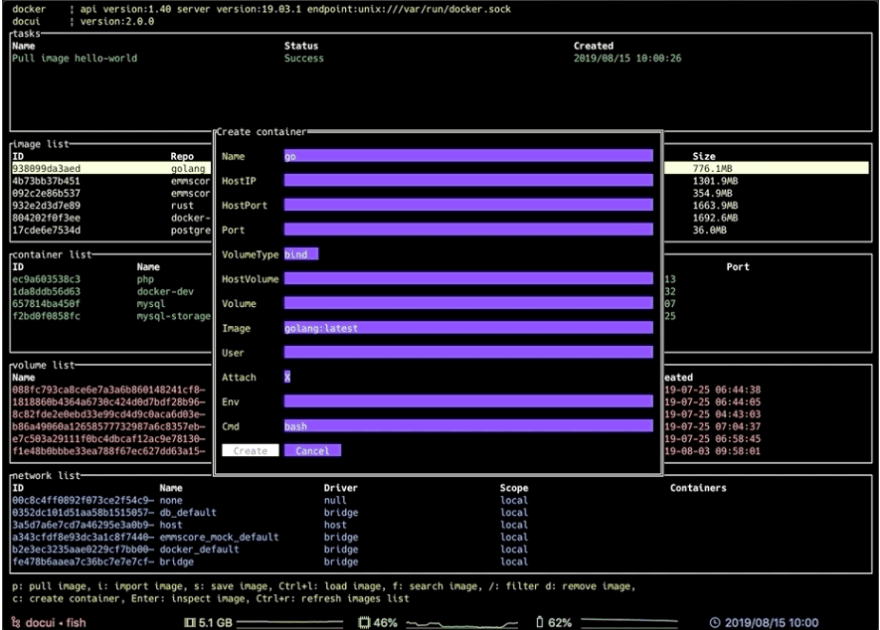 This console UI is made for convenient creation and configuration of new containers/services, where you can find a lot of keybindings for all necessary operations.

You can work with:

The above is not a full list but some of the most popular and convenient free GUIs for Docker. Which one to select - depends on your needs. If you need a really powerful instrument for a team with access management, works with Docker swarm, with Docker stack and can be deployed on a remote server - choose Portainer. If you require a powerful instrument, that works on several projects (possibly remote) with docker-compose and prefer a local desktop app - choose DockStation.

If your project is not that complex - you can choose among Lazydocker (if you want to mostly manage existing containers and services with console), Docui (if you mostly create simple images) or Docker Desktop (if you appreciate the desktop integrations and want to get a simple integration with Kubernetes).

Here are the 6 best Kubernetes newsletters to follow in 2023.