React is a very popular JavaScript library for its performance. It smartly does the work when it comes to handling page updates and data binding. But there are many scenarios behind that performance. Virtual DOM is one of them. When there is a change in UI then the DOM updates and the UI must be re-render.

This re-rendering is a slow process because CSS is also re-calculated at that time, then the layout must be re-computed, and at the last browser must paint the elements on the screen. For that reason, the concept of Virtual DOM appeared. Let's understand what is actually Virtual DOM. 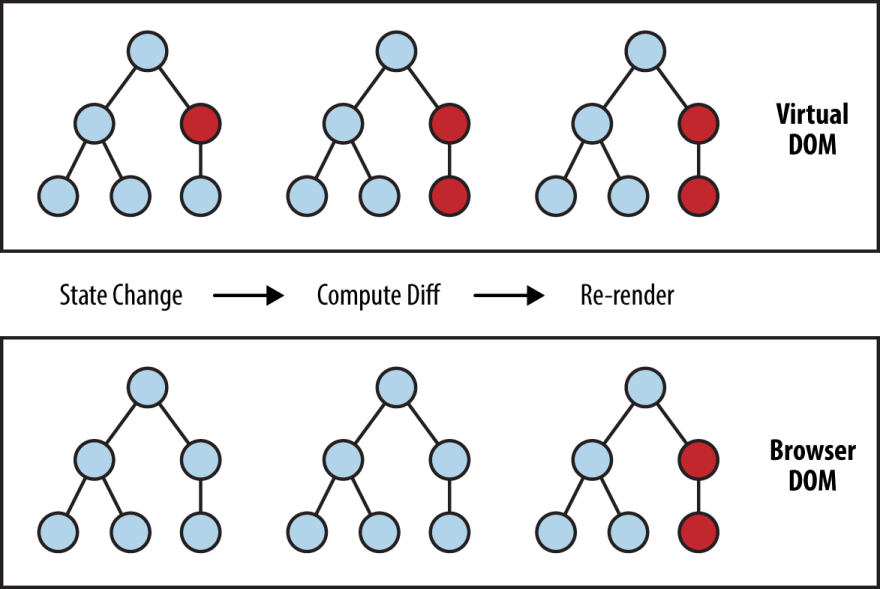 For doing this comparison React uses the "Diff" algorithm. With this algorithm React can understand where changes have occurred. Then React changes only that part of the DOM where the change was made. In the next step when the real DOM is updated then the updated virtual DOM becomes pre-updated virtual DOM for the next DOM change.

If we want to do DOM manipulation for simple event like click event at that time we will access the element by using getElementByID(‘id’) method. Here the method will find the element with specific id then it will perform the DOM manipulation. And this is very simple process. But if we have many components in our application and data inside them can be change within couple of seconds then it will be difficult to handle and also it will be time taking task. For overcoming this problem React uses Virtual DOM for DOM manipulation process.

The whole process of rendering are explained below:

This is the process how Virtual DOM works. Since it is taking some crucial steps so it can be time taking process but most of the steps happening regarding Virtual DOM which is mainly objects stored in the memory till last step. So, this is the whole scenario of Virtual DOM and how it helps React in rendering components.

Aulad Hossen (Himel)
I am a thinker, dreamer, believer and a receiver of all the positivity thats around.
Relational VS Non-Relational Databases
#javascript #react #database #webdev

Once suspended, auladhossen will not be able to comment or publish posts until their suspension is removed.

Once unsuspended, auladhossen will be able to comment and publish posts again.

Once unpublished, all posts by auladhossen will become hidden and only accessible to themselves.

If auladhossen is not suspended, they can still re-publish their posts from their dashboard.

Once unpublished, this post will become invisible to the public and only accessible to Aulad Hossen (Himel).

Thanks for keeping DEV Community 👩‍💻👨‍💻 safe. Here is what you can do to flag auladhossen:

Unflagging auladhossen will restore default visibility to their posts.