One of most question I receive is "which programming language is the best for serverless?". People want to know what's the best choice to create their functions in AWS Lambda. But for me, the answer is not that simple just looking for technical stuffs.

In terms of performance, there are programming languages that perform better than others. The main characteristic that differs to those programming languages is the cold start. If you don't know, cold start is an amount of time that your cloud provider spent to start a new instance of your function. Once your function instance is started, the cold start will not occur for the next execution (until the timeout).

So, if we think only technically, the answer is simple: use NodeJS or Python. But, as I said before, it isn't that simple.

For me, developing a serverless application isn't only a technical choose. It's especially about lead time, time to market and a better use of resources.

About better use of resources, when we develop our application faster it means we use less development resource. It's also important to think about maintenance, because once launched the application you need to keep that in the air, fix possible bugs, etc.

Thinking on all those things, I decided to create a diagram that help you to choose a programming language for your serverless function.

First of all, I want to clarify that's my own opinion, and it isn't a bullet silver, but I believe it will help you in most cases. 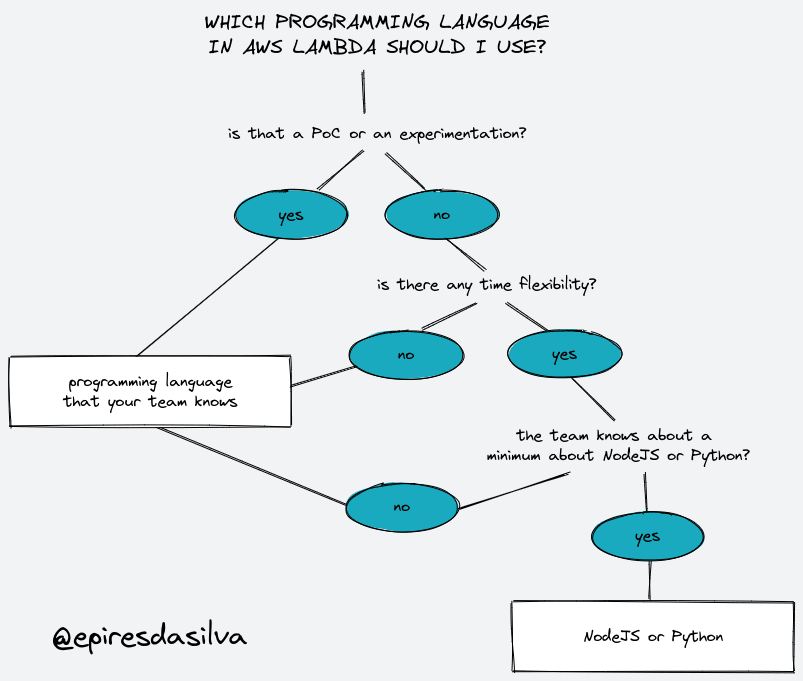 According to the image above, I prefer to use a programming language that the team knows instead of a "better programming language". I did that because I believe in most cases the time to market is more important than the performance. There are many cases when we use functions in an event based architecture and those events are asynchronous. Besides that, even when the function in synchronous, for many times those functions will be warmed up, so we mitigate performance problems.

If you need to rewrite some function in the future because of performance, it's easy, just because serverless functions are decouple by design.

Of course, if we have an opportunity to use an appropriated programming language in terms of performance it will be great, but I really believe in time to market first.

Once unpublished, this post will become invisible to the public and only accessible to Evandro Pires da Silva.