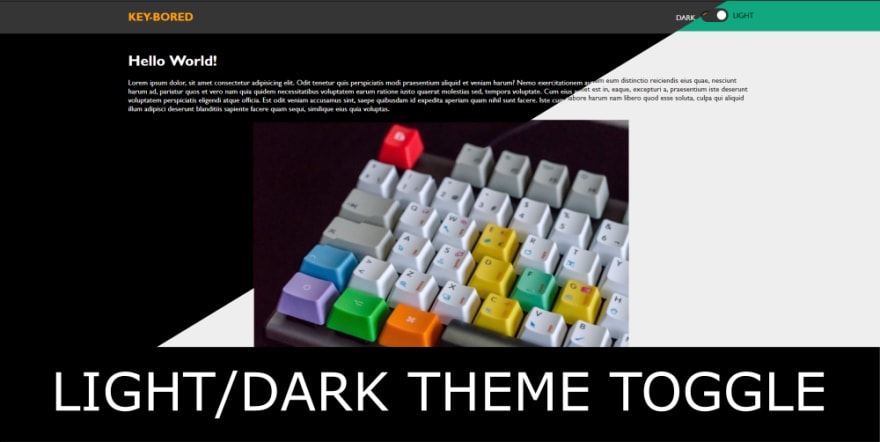 If you notice properly, in my website there is a dark mode toggle button on the top left corner. If you click it the website will turn into light themed. If you want similar feature in your website, then it is really easy to do so. I will show you how.

To start with, we will need an HTML layout to work on. So, I came up with a simple layout. It looks something like: 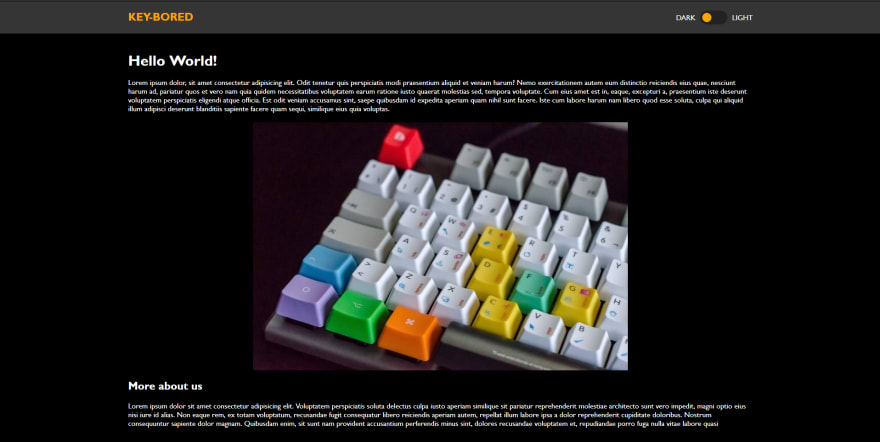 As I love dark mode I made it my default design. And in the light mode the design looks something like this: 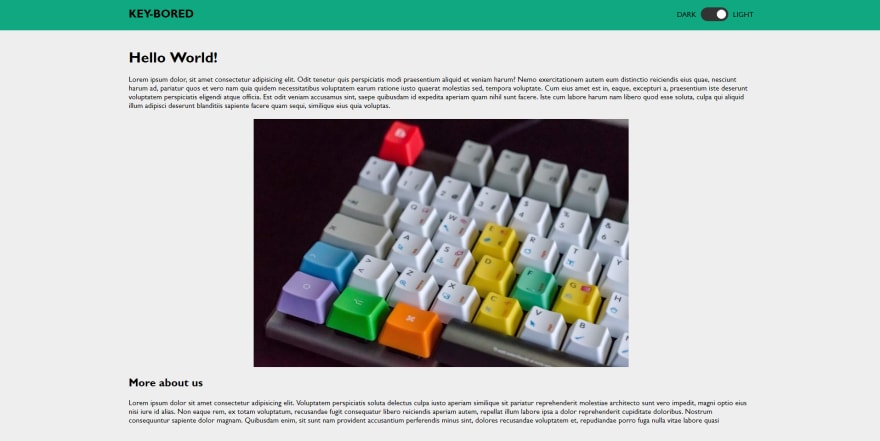 So, let's start writing this layout:

To start with I will create a folder and there will be these files:

In the index.html I will start with the initials:

This is the boilerplate provided with emmet plugin, which comes default with VSCode(the editor of my choice). However, you can install emmet on Atom or Sublime text as well.

Here the only changes I have made are -

Now, in the next part of the markup I created a wrapper to contain the whole app. This wrapper will be given a separate class via JavaScript later to apply the light mode settings throughout the app. This div was given a class of .fullscreen to apply some CSS on it initially and easily target it in JS as well.

Now it ws the time to define some CSS properties for this div and in general:

So I declared 0 margin and padding, along with setting the box size to border-box(which makes sizing the divs and all that easier for me) and the default font family was set to "Gill Sans", along with some fallbacks like calibri and so on.

After this I declared the CSS for the general wrapper i.e. fullscreen

As I decided to make the dark mode default, so I set the background color to black and made it to at least cover the full width and the height of the screen. By default I made it to set my text color to white.

Now, it was the time to move on with laying out the website and styling it further.

So, I created the NavBar next:

In the navbar, I first placed a container to keep the contents in the center. In this container I placed the h1 with the class of title and placed my company-branding there. Next, I placed the toggler. I kept the light/dark theme toggler inside a div with the class toggler-container. Inside that there are two p tags with the labels of DARK and LIGHT.

In the middle I placed a div with the class toggler which was the actual toggler. The div with class circle indicates the circle inside the toggler, which indicates which theme is currently enabled.

Now, without styling the nav is incomplete, so I brought in the styles:

This gave the navbar that dark grey look.

After this the container was designed to have some padding to make it not to stick on the edges. Made the margin to 0 auto to make it come in the center. The max width of the container was set to 1440px to prevent it from spreading too much on giant screens. For general purpose, it was allocated 90% of its parent's width.

Now the container inside the nav needed some special features, so I declared them next:

I made the title orange as well to give the site some contrast.

After this, to push the toggler-container to the right I used, margin-left: auto. Then I made it to display as flex to align the items in it side to side. justify-content and align-items was set to be center for better styling. So the CSS for that looked like this:

Now, it was the time to make the actual toggler:

So, here I made the background of the toggler of dark-grey(#222). I gave it a left and right margin of 10px to push the labels away. Then, I set its width to 60px and height to 100% of its parent to make it visible. Then I gave it a padding of 5px to keep the circle inside from overlapping its edge and finally the cursor was set to pointer so that the user could know that the button was clickable. The border radius was given to give it a capsule-like look.

Making the circle was really easy. I gave it a width and a height of 20px which made it fit inside the container perfectly. After this, I declared the border radius to make it a circle and gave a background-color of orange.

Now, at this point I had no JavaScript to toggle the button. So, I made the button to toggle on hover for now:

So, it was now time to add some things to the body of the page. In index.html I used some lorem ipsum text to write down this piece:

The lorem ipsum ... indicates that I added some more text there. I placed an image taken form unsplash, shortened and compressed it for the web and placed it between two paragraphs. I wrapped everything inside a container to keep it nice and center.

To make the image and the paragraphs look better, I added some CSS:

Now I could not resist to make my app responsive so I added some media query:

For devices of width under 550px having this media query display the things inside the nav to be arranged in a row manner by setting the flex direction to column. With justify-content and align-items I made everything centered inside the top nav. I separated the .toggler-container from the branding by first resetting its margin(so that it doesn't get pushed right) and then giving a margin-top of 20px.

It was now time to add the JavaScript and make our site toggle between modes.

So, to start with we need to attach our JavaScript with the HTML file like so:

Now in the JS we did not need much things to do:

At first, I acquired the toggler and the fullscreen(div containing the whole app), by using document.querySelector(). This function selects elements based on the query-string like:

Next, I added an EventListener to our toggler, which listens for the "click" event and calls the callback function given to it. In this callback function I toggle the class of "light" on the fullscreen element. Having this class "light" on the .fullscreen component makes the sit light themed, otherwise the site becomes dark themed. This function adds a class if it is not there and removes it if the class is there. So, the final JavaScript looks like this:

Now, having this will only toggle the class on the .fullscreen div. But we need to actually define some CSS for actually making the light theme.

To start with I made the toggler to change position on click and not on hover. As the class of .light is added to the parent node on click so in light theme to position the toggle right I made some color changes and made the CSS like this:

Which indicates, if the parent has a class of light, then make the toggler 's background grey(#333) and for the circle inside the toggler: make it white and move it 30px right.

Now for light theme, we needed to change the background of the nav and its h1 which was done easily by this code:

Now the only thing left was to set the default colors for the .fullscreen which was done by this CSS:

This .fullscreen.light searches for an element with both the classes fullscreen and light

So, now our app is ready, and it works like this:

All the source code is uploaded on github at here. The app is hosted here. I really enjoyed making this small utility. You can more enhance this app by adding the light class based on user preferences. Read more here. Maybe, you can also use localStorage to persist what theme was last used by the user. Submit your version of this webpage in the comments down below for others to enjoy.

Hashnode is taking over the world

Deploying a Dapp to Mainnet