This blog post demonstrates how to auto-scale your Redis based applications on Kubernetes. Redis is a widely used (and loved!) database which supports a rich set of data structures (String, Hash, Streams, Geospatial), as well as other features such as pub/sub messaging, clustering (HA) etc. One such data structure is a List which supports operations such as inserts (LPUSH, RPUSH, LINSERT etc.), reads (LRANGE), deletes (LREM, LPOP etc.) etc. But that's not all!

Redis Lists are quite versatile and used as the backbone for implementing scalable architectural patterns such as consumer-producer (based on queues), where producer applications push items into a List, and consumers (also called workers) process those items. Popular projects such as resque, sidekiq, celery etc. use Redis behind the scenes to implement background jobs.

In this blog, you will learn how to automatically scale your Celery workers that use Redis as the broker. There are multiple ways to achieve this - this blog uses a Kubernetes-based Event Driven Autoscaler (KEDA) to do the heavy lifting, including scaling up the worker fleet based on workload and also scaling it back to zero if there are no tasks in the queue!

Please note that this blog post uses a Golang application (thanks to gocelery!) as an example, but the same applies to Python or any other application that uses the Celery protocol.

It covers the following topics:

The sample code is available in this GitHub repository

To start off, here is a quick round of introductions!

In a nutshell, Celery is a distributed message processing system. It uses brokers to orchestrate communication between clients and workers. Client applications add messages (tasks) to the broker, which is then delivered to one or more workers - this setup is horizontal scalable (and highly available) since you can have multiple workers to share the processing load.

Although Celery is written in Python, the good thing is that the protocol can be implemented in any language. This means that you can have client and worker applications written in completely different programming languages (a Node.js based client and a Python based worker app), but they will be able to inter-operate, given they speak the Celery protocol!

KEDA can drive the scaling of any container in Kubernetes based on the number of events needing to be processed. It adopts a plug-and-play architecture and builds on top of (extends) existing Kubernetes primitives such as Horizontal Pod Autoscaler.

A KEDA scaler is responsible for integrating with an external service to fetch the metrics that drives auto scaling. We will be using the KEDA scaler for Redis, that auto scales applications based on the length (number of items) of a Redis List.

KEDA deep-dive is out of scope of this blog post. To learn more, please refer to the following resources:

Before we dive into the nitty-gritty, here is a high level overview of the application.

The application includes the following components: 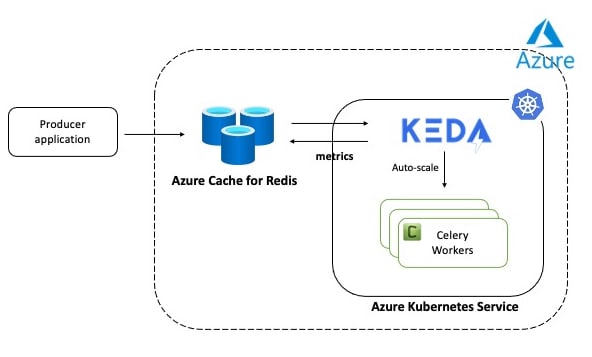 The producer is a Go application that submits tasks to Redis (using gocelery library). You can check the code on GitHub, but here is a snippet:

It runs a loop (as a goroutine) and sends randomly generate data (full name, email and address).

The producer application is available as a pre-built Docker image abhirockzz/celery-go-producer, however, you could choose to build another image using the Dockerfile provided in the repo.

The Celery worker application processes this information (via the Redis job queue). In this case, the processing logic involves storing data in a Redis HASH (but it could be anything). You can check the code on GitHub, but here is a snippet:

The sleep has been added on purpose to allow the worker application can pause anywhere between 0 to 10 seconds (this is random). This will help simulate a "high load" scenario and will help demonstrate the auto-scaling (details in the upcoming sections).

The worker application is available as a pre-built Docker image abhirockzz/celery-go-worker, however, you could choose to build another image using the Dockerfile provided in the repo.

A ScaledObject associates the Deployment we want to auto scale (in this case, its the Celery worker application) with the source of the metrics (length of a Redis List):

Here is a summary of the attributes used in the manifest:

It's time to move on to the practical stuff. But, before you go there, make sure you have the following ready:

To work through the application in this blog, you will need:

In the upcoming sections, we will:

To start off, please make sure to:

KEDA allows multiple installation options. I will be using the YAML directly

KEDA components will be installed into the keda namespace.

Before you proceed further, wait for the Deployments to be READY

We can now deploy the components required to auto scale our application. Start by cloning this repository and change to the correct folder:

We need to deploy the Secret first since its used by the Celery worker Deployment. First, encode (base64) the password for your Redis instance (check Access Keys in Azure Portal) in order to store it as a Secret.

Replace this in the credentials attribute in secret.yaml. For example, if the password is foobared:

The final version of secret.yaml will look like this (notice the encoded password in the credentials attribute):

We are almost ready to deploy the Celery worker application. Before that, please update the consumer.yaml file with the Redis host and port. Here is the snippet:

celery is the default name of the Redis LIST created by the Celery worker - please leave it unchanged.

Deploy the worker app, check the Pod and wait for status to transition to Running:

You can check the logs using kubectl logs <pod_name>

To deploy the KEDA ScaledObject:

We are all set to test the end-to-end setup!

No resources found ??? Wait, we had a consumer application Pod ready, what just happened? Don't worry, this is KEDA in action! Because there are no items in the Redis List right now (hence no work for the worker), KEDA made sure that there are no idle Pods running.

KEDA uses the information in the ScaledObject to create a Horizontal Pod Autoscaler object:

Let's run the Celery producer application and simulate some work by pushing items into the Redis List. Before you do that, switch to another terminal and start watching the consumer Deployment to track auto-scaling:

Go back to the previous terminal and run the application:

Wait for a few seconds. In the other terminal, you will notice that Celery worker Pods are being gradually created:

If you check the Deployment (kubectl get deployment/celery-worker), you will see something similar to this (depending upon how many Pods have been created):

You can check the Horizontal Pod Autoscaler as well. It should reflect the same stats:

If you happen to check the logs from one of the worker application Pods, you will log output such as this:

While our workers are happily churning along, let's check Redis as well. Use redis-cli:

First, check the length of the Redis List (named celery in this case). The output will reflect the number jobs that have been pushed in by the producer application and have not been processed yet.

The worker application creates HASH with user info (based on the random data it receives from the producer application). To check, use SCAN:

In addition to the user details, notice that the ID of the worker that processed this record is also available. This is to confirm that different worker instances are sharing the workload.

We had set 10 as the listLength in the ScaledObject manifest and specified maxReplicaCount as 10 (so the no. of Pods will be capped to this number).

Once all the items in the list are consumed and it's empty, the Deployment will be scaled down after the cooldown period is reached (200 seconds in this example). Eventually, the number of Pods will go back to zero. You can "rinse and repeat" this again and experiment with different values for the number of messages you want send (simulate load), the no. of replicas you want to scale to, a different thresholdCount etc.

Once you're done, don't forget to delete the resources you created:

We covered Redis Scaler in this blog, but KEDA offers many such scalers. KEDA deals with auto scaling your applications, but, what if you could run all of these application instances on an infrastructure other than the Kubernetes cluster nodes for e.g. a Serverless platform?

If this sounds interesting, do check out Virtual Nodes in Azure Kubernetes Service to see how you can use them to seamlessly scale your applications to Azure Container Instances and benefit from quick provisioning of pods, and only pay per second for their execution time. The virtual nodes add-on for AKS, is based on the open source project Virtual Kubelet which is an open source Kubernetes kubelet implementation.

How to add delay between CSS keyframe animation ⚓