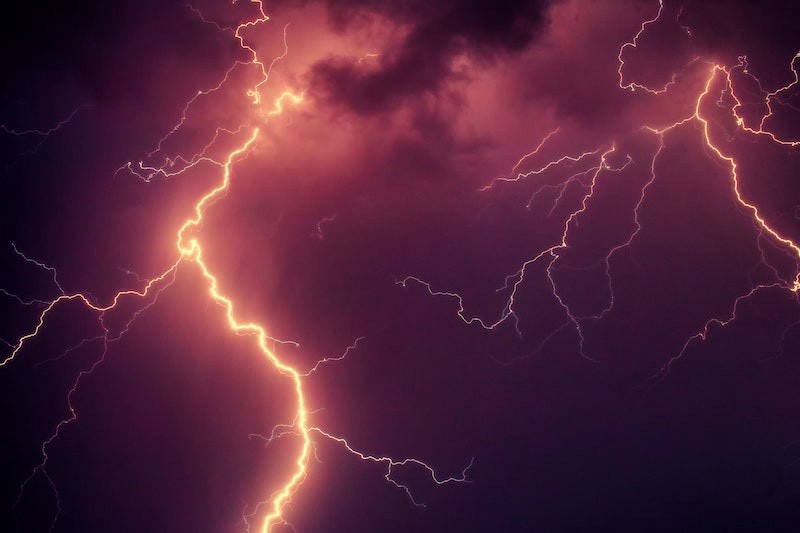 We have come to rely on Git as our default version control tool ever since it was released, it has become de facto standard even if other options exist. Git helps us manage our source code, divide it in branches and it even helps us working with other developers on places like for example GitHub or GitLab by allowing us to create Pull/Merge requests. Wouldn’t it be great if Git can be there for us when we move our Apps to the Cloud?

This article will cover the following:

Why Cloud and why Git?

Cloud is almost the default place for developers to deploy new apps today. The reasons are many like it is cost-effective, scalable, elastic and has some great built-in support for security ( even though we can’t rely on the Cloud wholly).

Git is a tool we most likely are already using when we code as a way to manage our source code, especially when we are many developers maintaining the same code base. The best way to add a skill like Cloud and deployment to your tool belt is by using technologies you already know. So here it is, take what you already know, Git and add some Cloud to it. Hope you enjoy this article :)

We do refer to some docs pages throughout this article so here they are so you can learn more:

Let’s get a sample app first. The easiest way to do that is by installing Git if you haven’t done so already and grab the sample project out of GitHub:

The application above is a Python application using the library Flask to give us a REST API. What does this repository give us?

Let’s have a look at application.py and how it sets up some routes for us:

What the above code does is to define a route / and it lets the method hello deal with the mentioned route and it outputs the text Hello World , a pretty standard phrase when it comes to your first application in a new programming language or library.

Ok, now we understand a bit more what we have in front of us. Next up is attempting to run this application locally before attempting to deploy it to the Cloud.

To get a Python app up and running we need to install Python and the dependent libraries that come with it. The instructions for that is a little bit different depending on what OS we are on, that is Windows, Linux or Mac. If you are on a Mac, you’ve got Python installed already. However, you will need the package manager Pip, which we can get hold of by running:

It’s worth having a look at the upcoming link if you are a serious Python developer. If you are not and you are just here for Git and Azure feel free to skip the below paragraph.

Next thing we need to do is to install the dependent libraries and we do so by invoking the following command in the terminal:

A quick look at the requirements.txt file reveals we have some depending libraries that our app needs. As we can see below it’s our API framework Flask together with some supporting libraries:

Then we just need to set the environment variable FLASK_APP to point to our starter file application.py , like so:

Great, so we are ready for our next step, deploying to the Cloud.

To create our deployment user we need to use the command az webapp deployment. Then we need to provide a user after the --user-name flag and a password after the --password flag. The password needs to be at least 8 characters long and contain two of the following three elements: letters, numbers, symbols. The full command we need to run looks therefore like this:

Here is an example of what invoking the above command can look like. Let’s call the user deployment-user-chris and give it the password test1234. Thereby our command now looks like this:

This should give you an output looking like this: 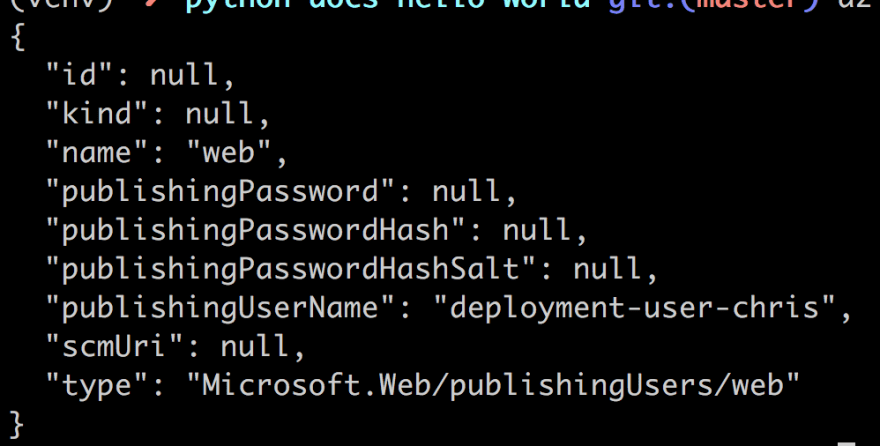 The above output means that our command succeeded and we can keep going to the next step.

You can either use one of your existing resource groups or create a new one in which case you would type the following:

An App Service plan in Azure defines a set of compute resources for an App to run on. This corresponds to a service farm in a more traditional Web Hosting. A service plan comes with a pricing tier. The pricing tier decides what App Service features you get and how much you pay for your plan. There is a lot more to know here, the interested reader is urged to have a look at the following link to see how this works more in detail.

For the sake of this article though it’s enough to understand that all Apps running on AppService needs a service plan as a prerequisite.

The full command for creating a service plan is this:

We are using the appservice command above and the subcommand plan to create our service plan. This should also give us a JSON response back with provisioningState key having value Succeeded

Below is the command for creating the web app. We will need to state the resource group , pricing plan the name of the app, the version of Python and lastly how we will deploy it, which is git deploy:

A comment on the above command is that the app name will need to be globally unique.

In the JSON response to this we are looking for two interesting pieces of information:

What you’ve accomplished is an empty web app with git deployment enabled. The reason is empty is cause we have yet to put any code in there.

Even though we haven’t pushed any code to our site yet it still contains something namely a default landing page that we can visit. To visit the web site go to http://.azurewebsites.net

This should show you a default site looking like this: 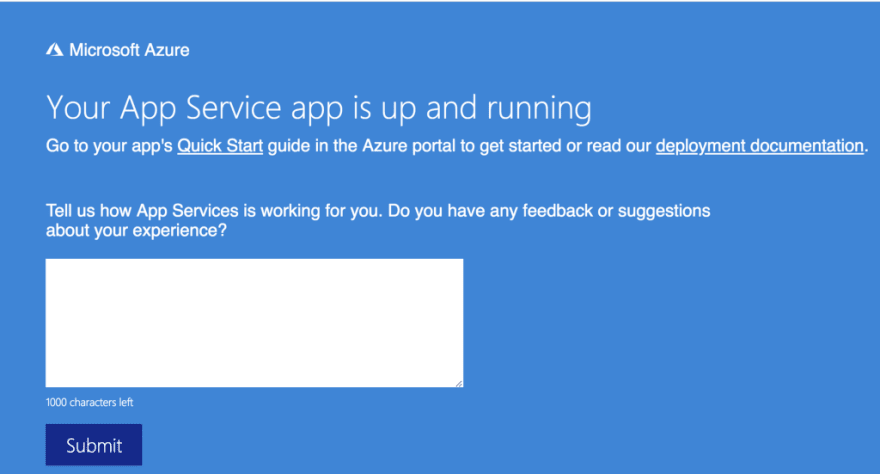 That seems to work, great! Ok, so we’ve done most of the heavy lifting, now it’s time to roll up your sleeves, crack those knuckles cause we are about to make our web site come alive.

Push the code to the web site

Now it’s time to push the code so we simply type:

This will take a little while so go and have a warm beverage :) It should finally dump out a long list of logs ending with:

That means that your app deployed successfully and you can now go back to your app URL and you should see this:

This is quite easy now that we have git deploy activated. Let’s do the following:

Let’s go into application.py and change it to this: 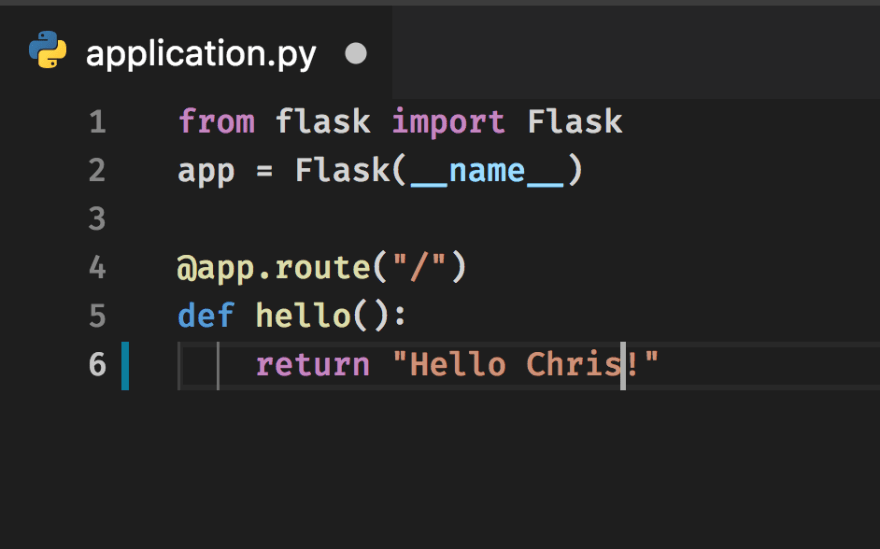 We commit as we would normally do in git with:

Push the code to our remote

Let’s now push to our remote branch by typing:

This should generate a bunch of log entries and end with deployment successful. Let's verify that that is the case by going to our app url:

We have learned how to deploy an app to Azure and even update it and redeploy. That’s a lot in one article. Let’s have a brief look at the steps we took to accomplish this:

This taught us the basics of starting with web app development with Azure and prepared us for future adventures. Stay tuned for more fun in the cloud :)