In my previous post, I discussed how all secrets in Azure Key Vault could automatically manage their versions to get disabled. While that approach was surely useful, it sometimes seems overkilling to iterate against all secrets at once. What if you can manage only a certain secret when the secret gets a new version updated? That could be more cost-effective. As an Azure Key Vault instance publishes events through Azure EventGrid, by capturing this event, you can manage version rotation.

Throughout this post, I'm going to discuss how to handle events published through Azure EventGrid and manage secret rotations using Azure Logic Apps and Azure Functions when a new secret version is created.

You can download the sample code from this GitHub repository. 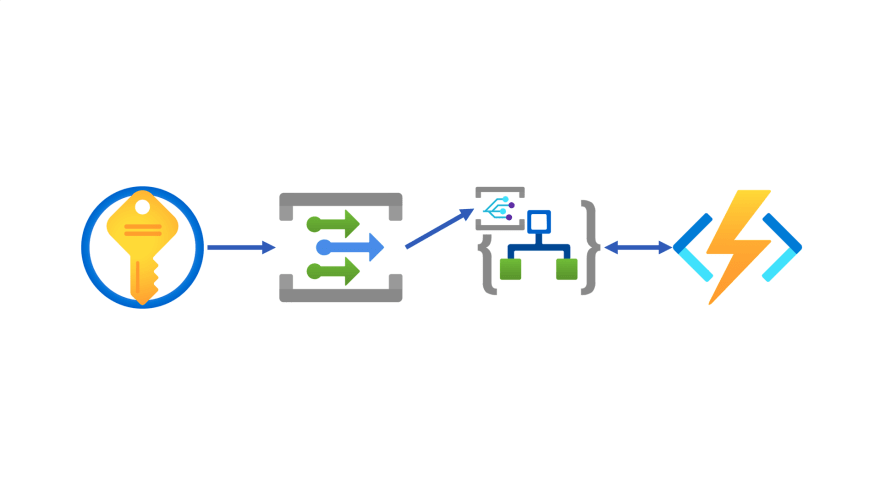 Like I mentioned in my previous post, using Azure Logic Apps as an event handler doesn't require the event delivery authentication. But if you prefer explicit authentication, please refer to my another blog post.

There are two ways to integrate Azure Key Vault with Azure Logic App as an event handler. One uses the EventGrid trigger through the connector, and the other uses the HTTP trigger like a regular HTTP API call. While the former generates a dependency on the connector, the latter works both instances independently, which is my preferred approach.

First of all, create an Azure Logic App instance and add the HTTP trigger. 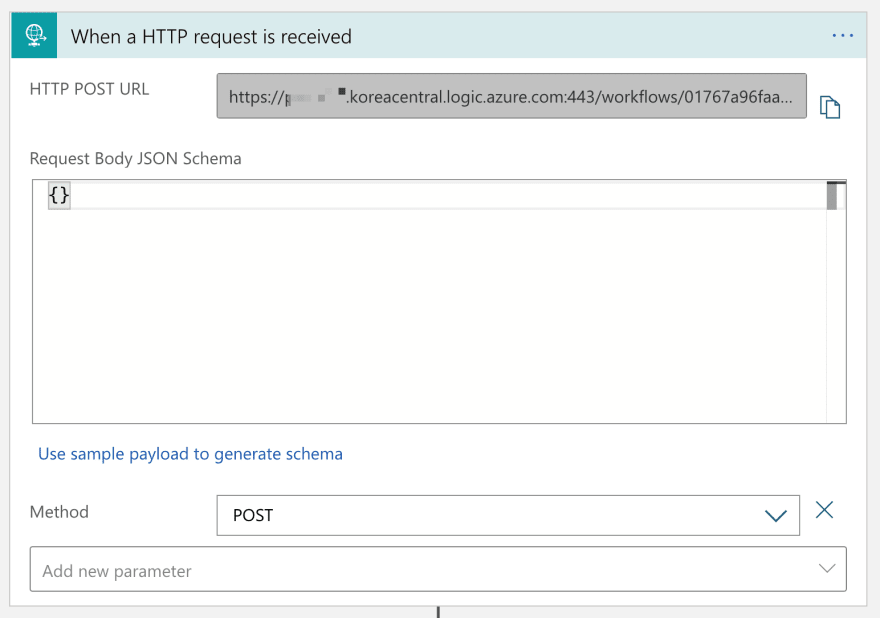 Once save the Logic App workflow, you will get the endpoint URL, which will be used as the event handler webhook. Go to the Azure Key Vault instance's Events blade and click the + Event Subscription button. 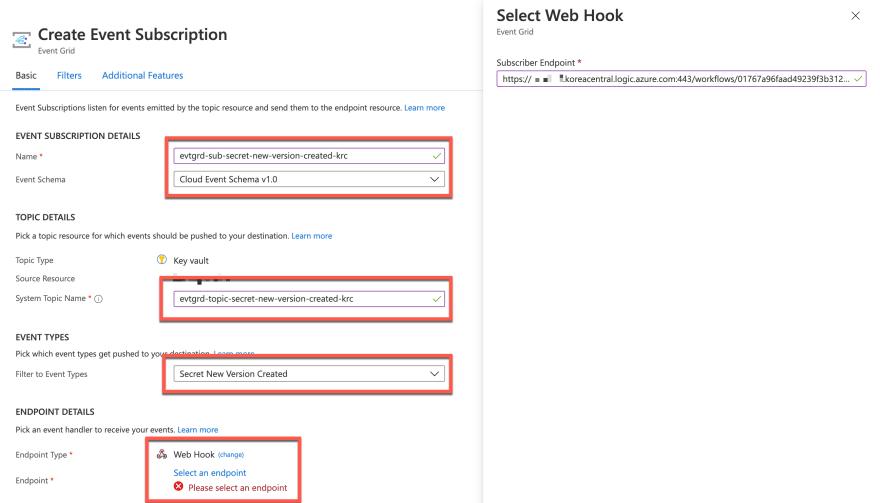 You've completed the very basic pipeline between Azure Key Vault, Azure EventGrid and Azure Logic Apps to handle events. If you create a new version of a particular secret, it generates an event captured by the Logic App instance. Confirm that the Microsoft.KeyVault.SecretNewVersionCreated event type has been captured. 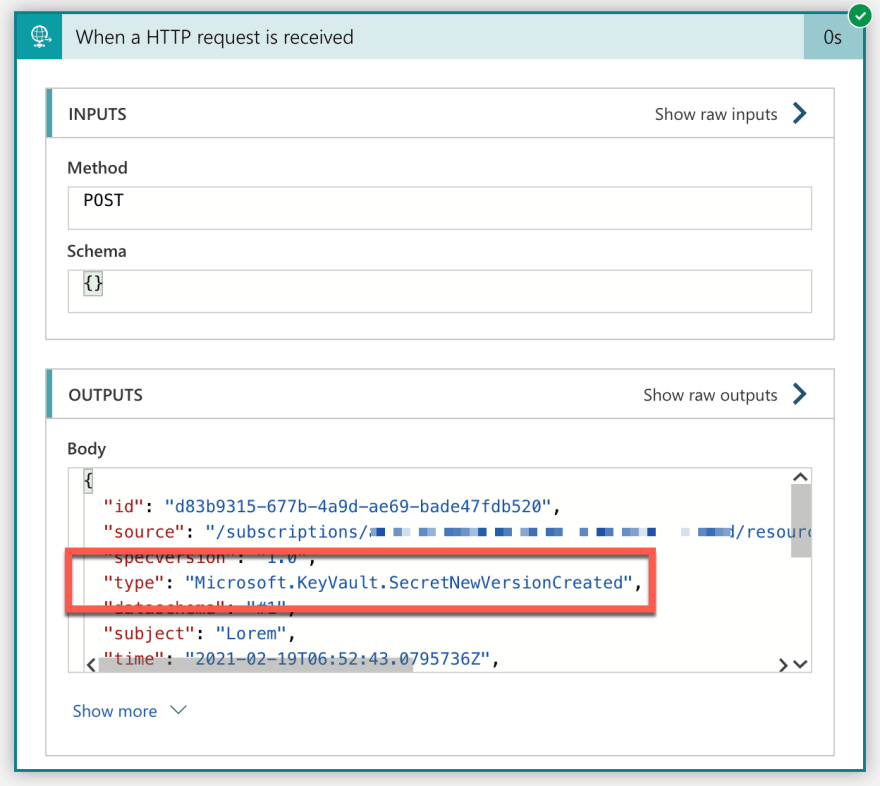 The actual event data as a JSON payload looks like this: 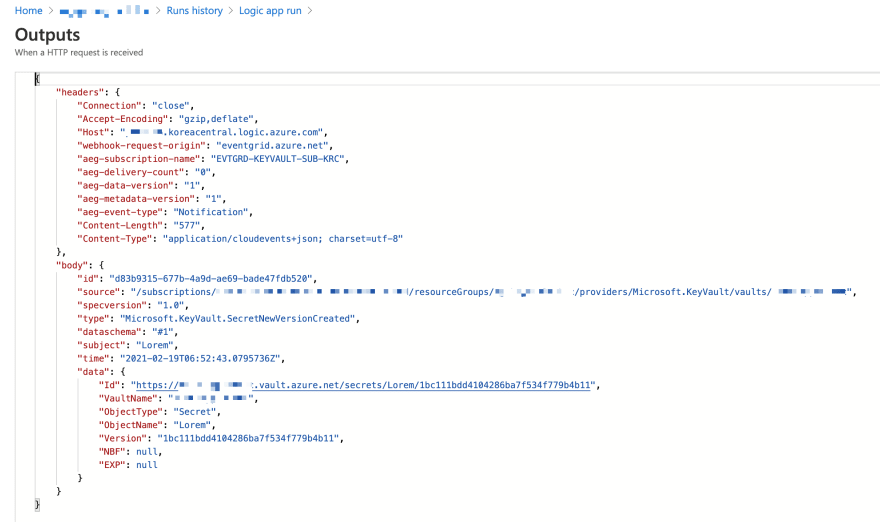 There is the attribute called ObjectName in the data attribute, which is the secret name. You need to send this value to Azure Functions to process the secret version rotation management. Let's implement the function logic.

There are not many differences from my previous post. However, this implementation time will become simpler because it doesn't have to iterate all the secrets at once but look after a specific one. First of all create a new HTTP Trigger.

A new HTTP trigger has been generated with the default template. Now, update the HttpTrigger binding settings. Remove the GET method and put the routing URL to secrets/{name}/disable/{count:int?} (line #5). Notice that the routing URL contains placeholders like {name} and {count:int?}, which are substituted with parameters of string name and int? count respectively (line #6).

Next, instantiate the SecretClient object that can access the Key Vault instance. While instantiating, give the authentication options with the DefaultAzureCredentialOptions object. If your log-in account is bound with multiple tenants, you should explicitly specify the tenant ID; otherwise, you will get the authentication error (line #4-6).

As you already know the secret name, populate all the versions of the given secrets. Of course, you don't need inactive versions. Therefore, use the WhereAwait clause to filter them out (line #5). Additionally, use the OrderByDescendingAwait clause to sort all the active versions in the reverse-chronological order (line #6).

If there is no version enabled, end the function by returning the AcceptedResult instance.

As you need at least two versions enabled for rotation if there is no count value given, set the value to 2 as the default.

If the number of secret versions enabled is less than the count value, complete the processing and return the AcceptedResult instance.

Let's disable the remaining versions. Skip as many as the count value of the versions (line #2). Set the Enabled value to false (line #7), the update them (line #9).

Finally, return the processed result as a response.

The implementation of the Azure Functions side is over. Let's integrate it with Azure Logic Apps.

Add both HTTP action and Response action to the Logic App instance previously generated. Make sure that you call the Azure Functions app through the HTTP action, with the ObjectName value and 2 as the routing parameters. 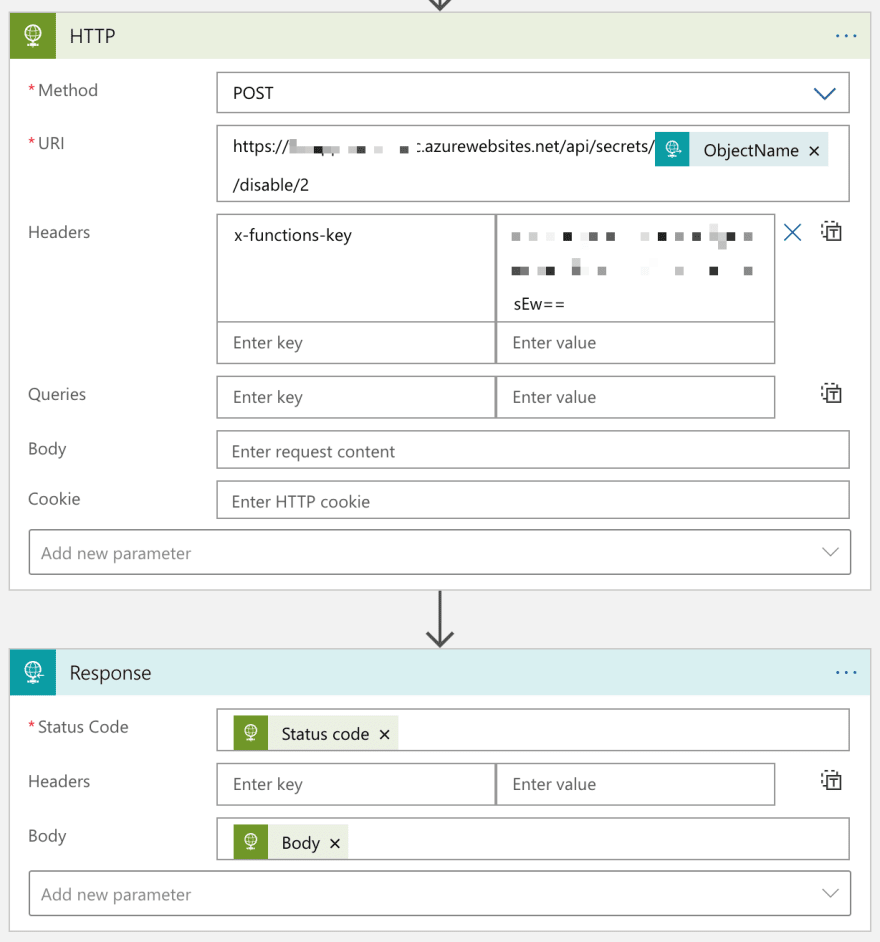 In order to run the integrated workflow, you need to create a new version of the Azure Key Vault Secrets. 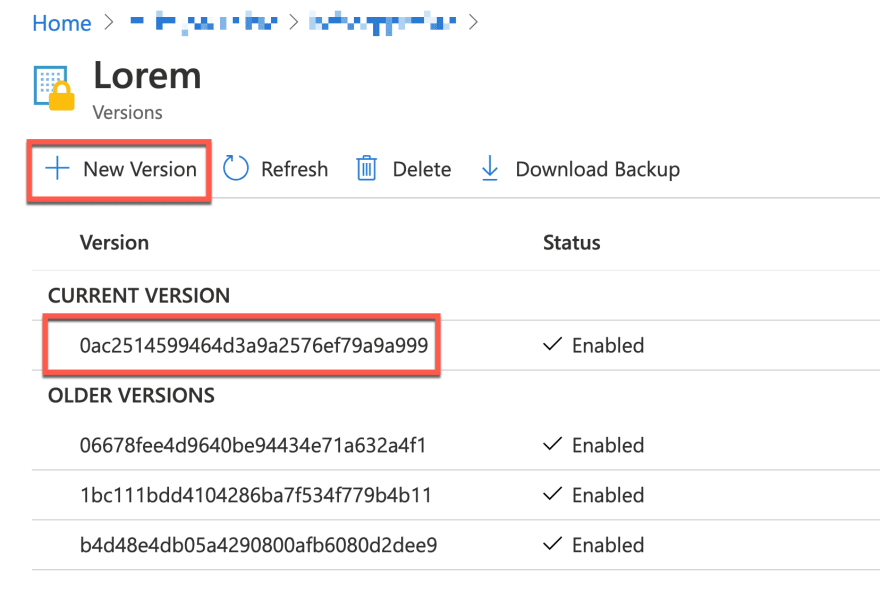 Add a new version of the secret. 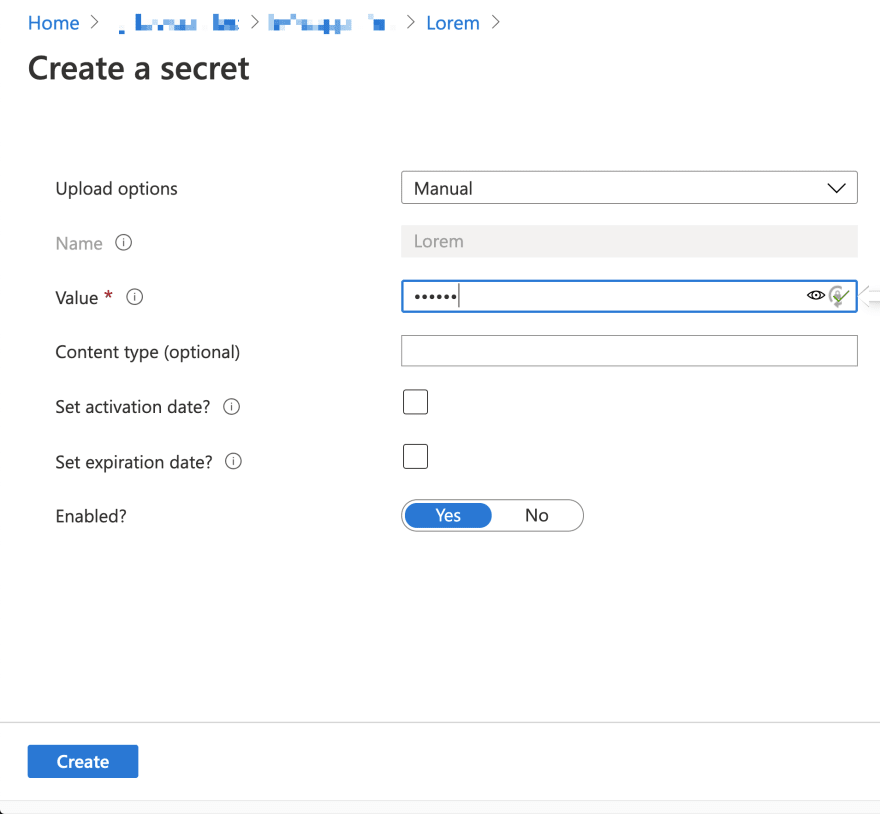 You will see the new version added. 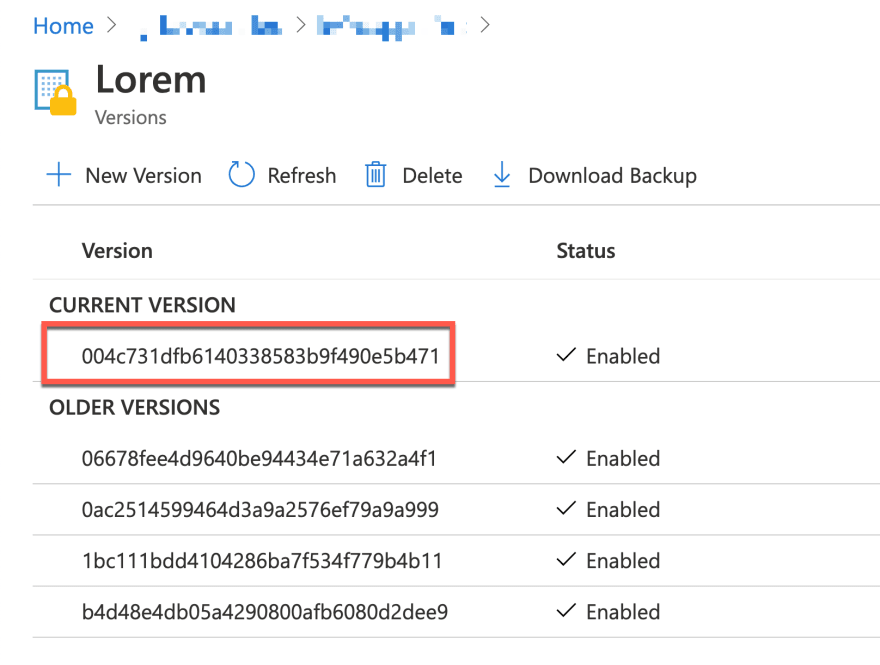 When a new secret version is added, it publishes an event to EventGrid, and the Logic App captures the event. Can you confirm the ObjectName value and the secret version are the same as the one on the Azure Key Vault instance? 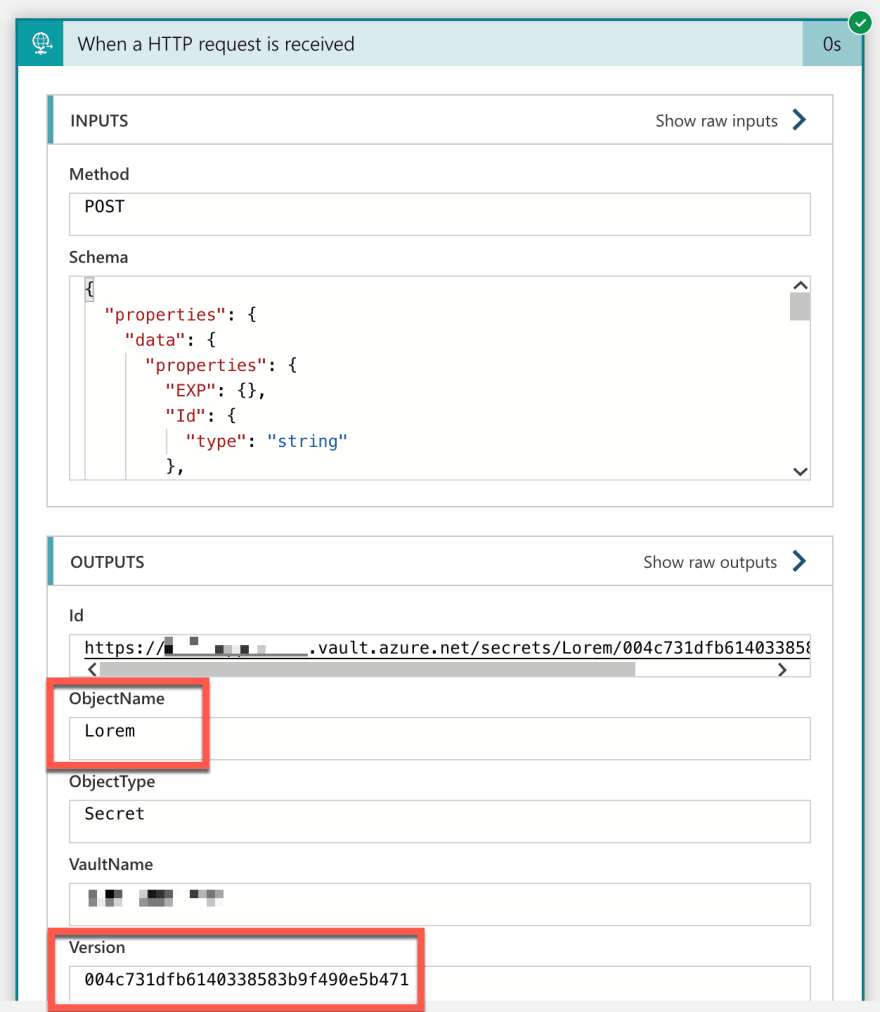 Once you complete the end-to-end integration workflow, you will be able to see that all versions except the latest two have been disabled. 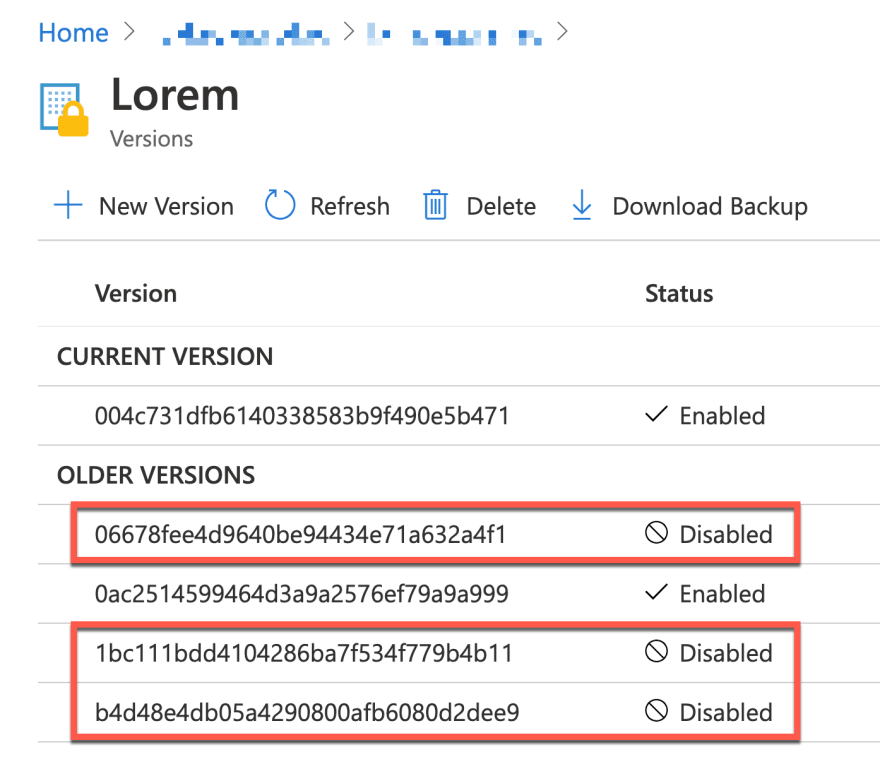 So far, we've implemented a new logic that captures an event published when a new secret version is added to Azure Key Vault instance, and process the rotation management against the specific secret, using Azure EventGrid, Azure Logic Apps and Azure Functions. It would be handy if you have a similar use case and implement this sort of event-driven workflow process.