Following this blog post on Spring Boot and MongoDB, I decided to port it in order to be "fully reactive" :

The idea of this post is that we should be fully reactive from the database to the Web layer, so we can study the required APIs and have a look at the performance and scalability of this architecture.

Giving a spin to the new Azure CosmosDB SDK

Please note that this uses the newest Azure CosmosDB SDK, which not yet finished, so this post is also a world-first preview of that SDK, so we can test it and discuss it. I (Julien Dubois) am directly in contact with the SDK team at Microsoft, so if you have any comment or issue, don't hesitate to post it on this article, or contact me directly!

As this is some new code, you can expect a few issues. For example I found this one while doing this blog post, and I proposed a fix here. But as you'll see along this blog post, this new API is much better than the previous one, and behaves really well.

Doing a CRUD with the new CosmosDB SDK

The really awesome news about the new CosmosDB SDK is that is uses project Reactor, like Spring Webflux, instead of the aging RxJava v1 API from the previous release. This means it's going to return Mono and Flux objects, and those are exactly what Spring Webflux likes, so integrating both is going to be very smooth and easy.

The whole demo project is available at https://github.com/jdubois/spring-webflux-cosmosdb-sql/, but let's focus on the repository layer as this is where all the CosmosDB SDK magic lives.

We have created a specific Spring Boot configuration properties class in order to hold our configuration. This is used in our repository layer, which looks like this:

The important part is that it uses the "direct mode" connection policy, instead of the default "gateway" policy: in our tests, this clearly did a huge difference, as our reactive code is maybe too efficient for the gateway, and was flooding it quickly. So we had a lot of connection errors to the gateway, which just disappeared as soon as we switched to direct mode: if you can use it, it is very highly recommended in this "reactive" scenario.

In the init() method (available here) we also did 2 blocking calls to create the database and its container. There are a couple of interesting tweaks here:

Creating, finding and deleting an item

For simple operations, when we have an item's id (and partition key), we can directly use a simple API, for example for creating:

As there is no ORM provided, we need to manually map our return result to our domain object. That's quite a lot of boilerplate code for bigger objects, but that's common to this kind of technology. The great news, of course, is that in this case we can easily return a Mono<Project>, which is exactly what Spring Webflux wants to have.

Doing an SQL query is a bit more complex, and we had two issues here:

Here is the resulting code:

Be careful when trying to limit the number of return values, as you might be tempted to configure the FeedOptions instance using options.maxItemCount(20). This will not work, and is quite tricky:

At least we arrive to performance testing! We're going to do something similar to the blog post on Spring Boot and MongoDB so you can have a look at both results, but don't compare apples and oranges, as this other application was created using JHipster. JHipster does not (yet) fully support reactive programming, so the Spring Webflux was coded manually, and is thus quite different:

So, while it is interesting to compare both applications, keep in mind they are not exactly 1-to-1.

As we did in the Spring Boot/MongoDB blog post, we deployed the application on Azure Web Apps using the provided Maven plugin (see it here in our pom.xml).

Our test scenario is made with Gatling, and is available at https://github.com/jdubois/spring-webflux-cosmosdb-sql/blob/master/src/test/gatling/user-files/simulations/ProjectGatlingTest.scala. It's a simple script that simulates users going through the API: creating, querying and deleting items.

Our first test is with 100 users, and as expected everything works really well as it's not a lot of concurrent requests: 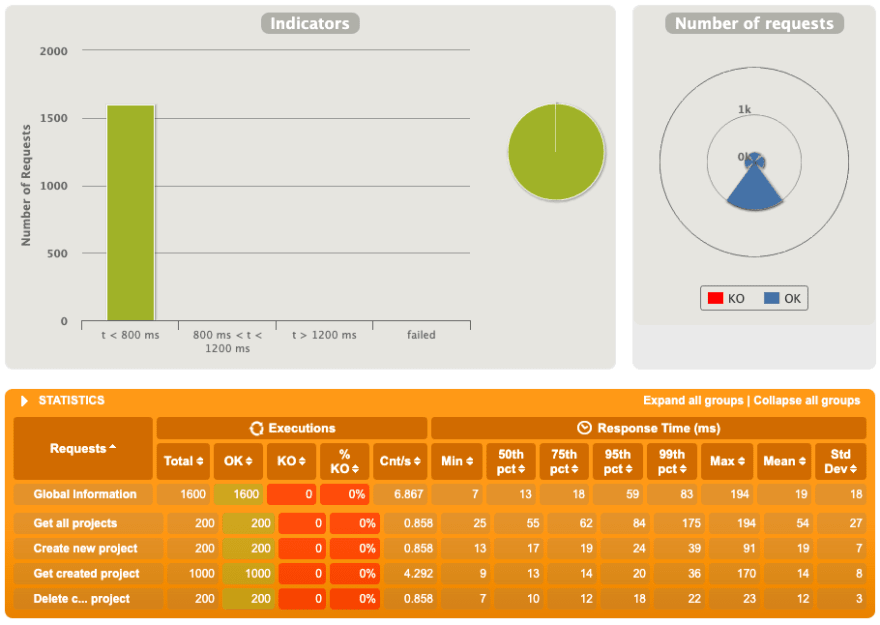 Nothing to see, let's move on!

Going to 500 users is interesting: it still works really well, but we had 3 errors: 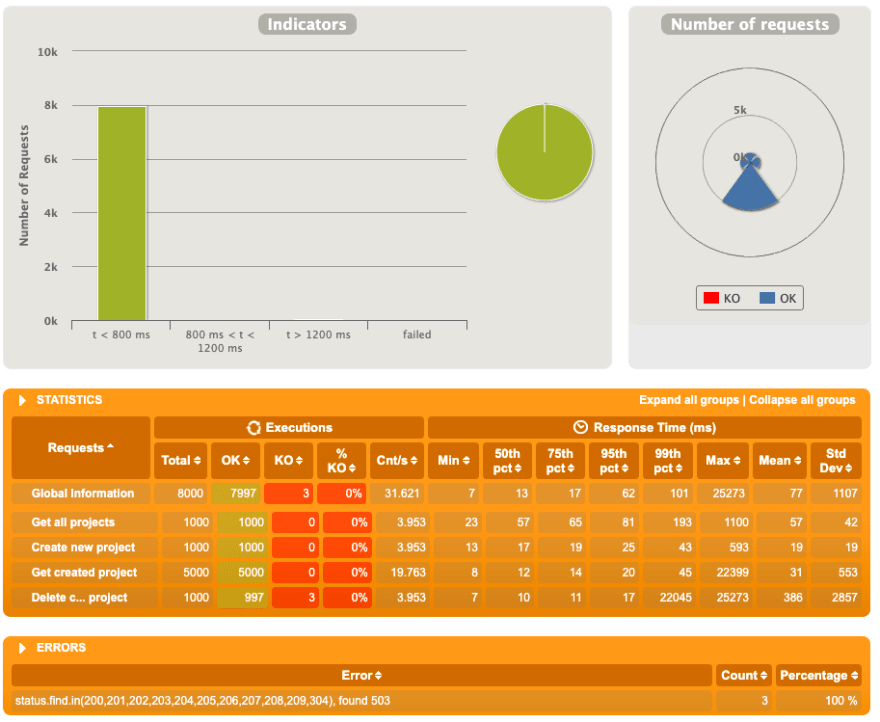 This is because deleting items is a costly operation on CosmosDB (it uses a bit more than 5 RU), so doing this when the application is on full load means we're hitting our API limit. This is a result of having a more performant and stable application than with the classical Spring Web framework: we are hitting our backend harder, and we need to take this into account. 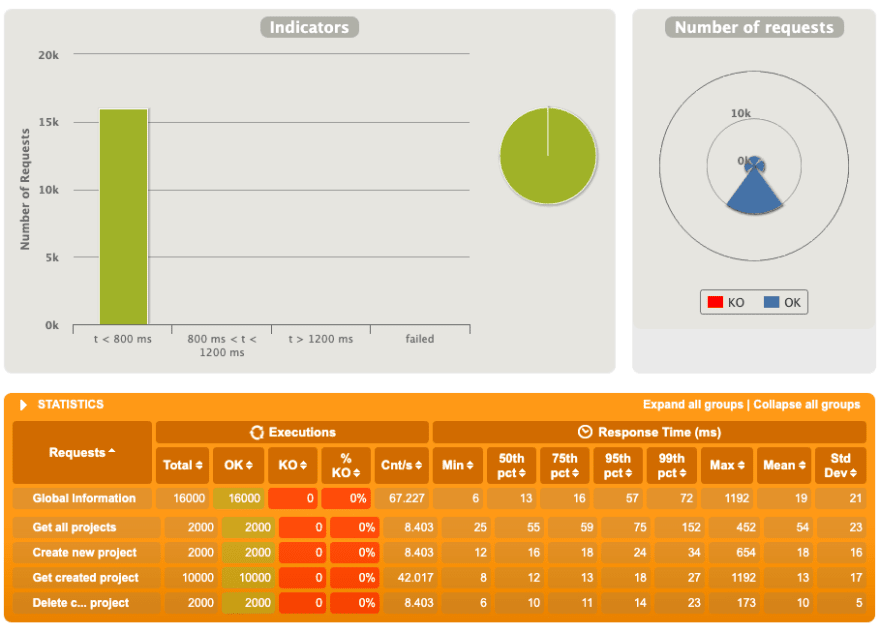 Again, everything went fine without any issue, let's scale up!

Going to 10,000 users had an interesting side-effect: our Gatling tests started to fail, on the client side. So we had to increase the ulimit on our load testing machine: this is quite usual, but it didn't happen with Spring Web, so here again we see that going fully reactive has an effect, as it's running too fast for our load testing machine. Still, we had a few client-side errors, as Gatling could not find the hostname of our server: this is sadly why we couldn't go to 20,000 users...

We also started to have some server errors after reaching 5,000 users: those are basically the same ones than on the client side, with too many files opened on the server. As we are using Azure Web Apps we couldn't modify anything on the server, but we could easily scale it out. From our tests, it seems that 2/3 servers would be enough, but we used 5 just to be sure. Please note that with Spring Web we used 20 servers: once again, both tests are not 1-to-1 equivalents, and should be refined, but it's pretty clear that we use less resources with the reactive stack. 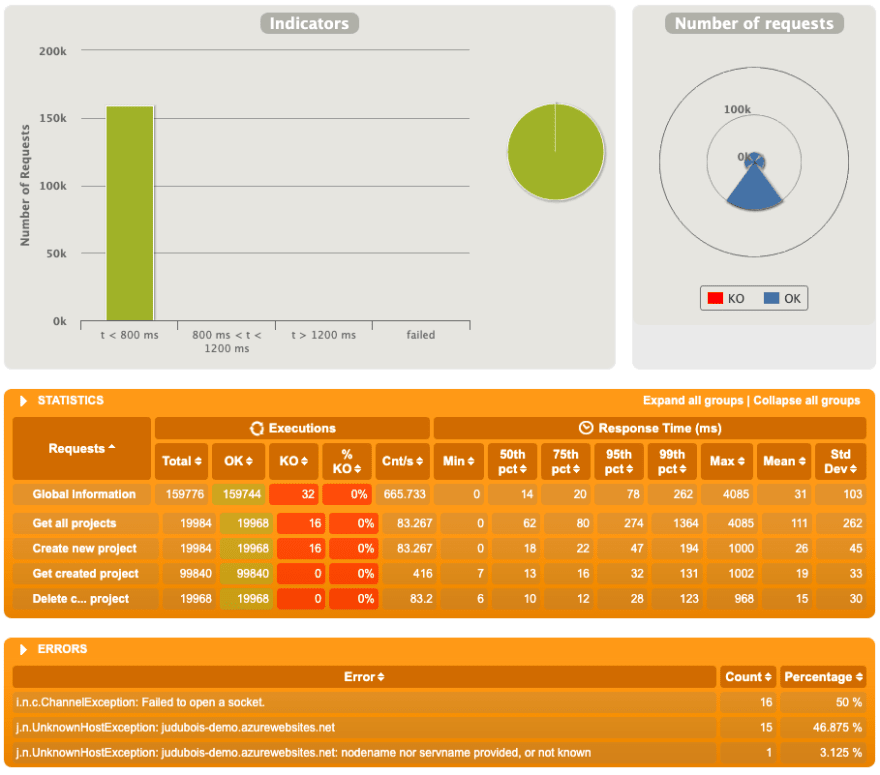 Please also note that our 99th percentile performance was excellent, and that we scaled very easily to 1,0000 requests/seconds in one minute, with a very clean graph:

As everything looked really great with our graphs, but our load testing tool prevented us to go further, we decided to do some profiling with YourKit, in order to be sure we had nothing blocking or holding us to go further.

Running with 5,000 users on a local machine, we could see that no thread was blocking: 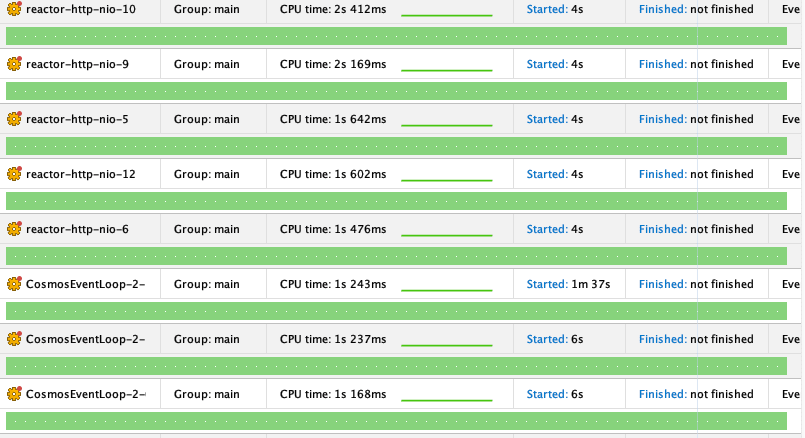 And also that our CPU usage was extremely low, our thread count stable, and our memory low and stable: 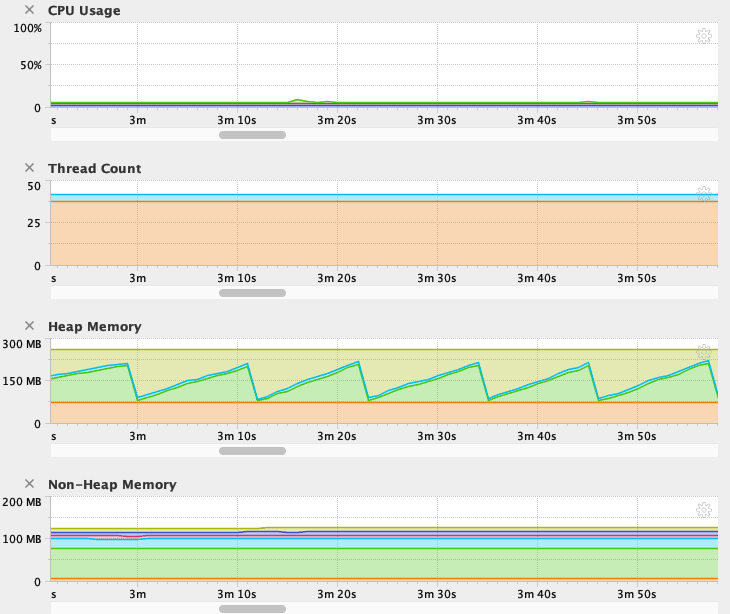 We also ran some YourKit analysis to find bottlenecks, locks or memory-hungry objects: we spare you with the details, as we couldn't find anything!

By going "full reactive", we got a number of advantages :

However everything isn't perfect :

We also had a first taste of the new v3 version of the CosmosDB SDK : we proved it worked extremely well under high load, and also we had the good fortune to have it work with the same reactive framework as Spring Webflux.
There are definitely still a few bugs, and also APIs to improve, for instance :

As there is still time to improve that API, please take the time to read the demo code, and provide feedback: add a comment on this post, send a Twitter message... Don't hesitate, I'll be happy to communicate that feedback with the SDK team at Microsoft.

Java - How to Apply Gridlines or Borders to Excel Cells