A few months ago, I had a chance to do live streaming with Cheese (@seojeeee) about this topic – Part 1 and Part 2 in Korean. I know it's warm and humid in the summer season in Korea. Therefore, I implemented this feature for my air-conditioning system at home, as well as other home appliances that work with remote controllers. However, as I have very little knowledge of Raspberry PI and other hardware, it was really challenging. This is the post to note to future self and others who might be interested in this topic.

The sample codes used in this post can be found at this GitHub repository.

It might be only me, but I found that Raspberry PI and its extension modules like IR sensor are very version sensitive. I Google'd many relevant articles on the Internet, but they are mostly outdated – not valid information any longer. Of course, this post will also have a high chance to be obsolete. Therefore, to avoid visitors from being disappointed in the future, it would be a great idea that I specify which hardware and software spec I used.

Your Raspberry PI OS has now been up-to-date and got the LIRC module installed.

Let's configure the LIRC module to send and receive the IR signal.

Uncomment the following lines and correct the pin number. The default values before being uncommented were 17 for gpio-ir and 18 for gpio-ir-tx. But it should be swapped (line #5-6).

Of course, it might be working without swapping the pin numbers. But it wasn't my case at all. I had to change them to each other.

Let's configure the LIRC module hardware. Open the file below:

Then enter the following:

Update the LIRC module options. Open the file with the command:

Once you've completed by now, reboot Raspberry PI to recognise the updated bootloader.

Send this command to check the LIRC module working or not. 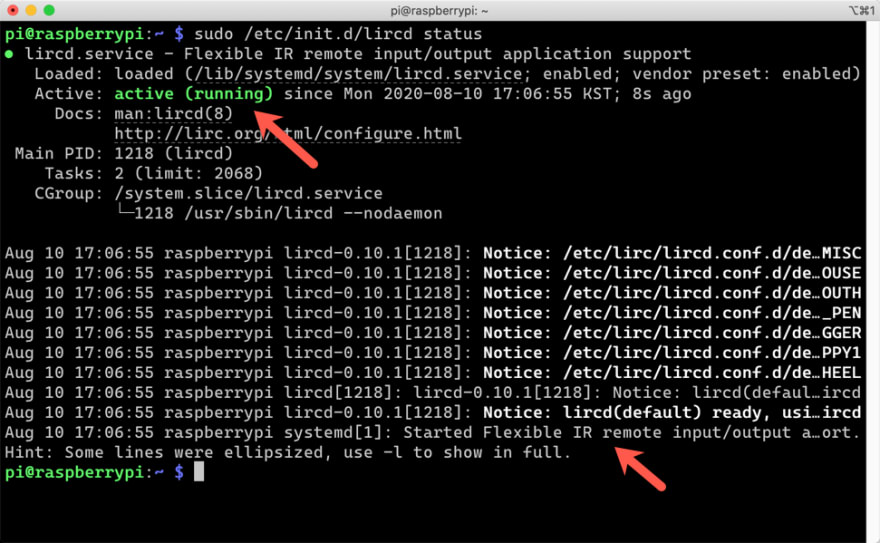 This is the most important part of all. I have to register the remote controller I'm going to use.

Use Remote Controller Database for Registration 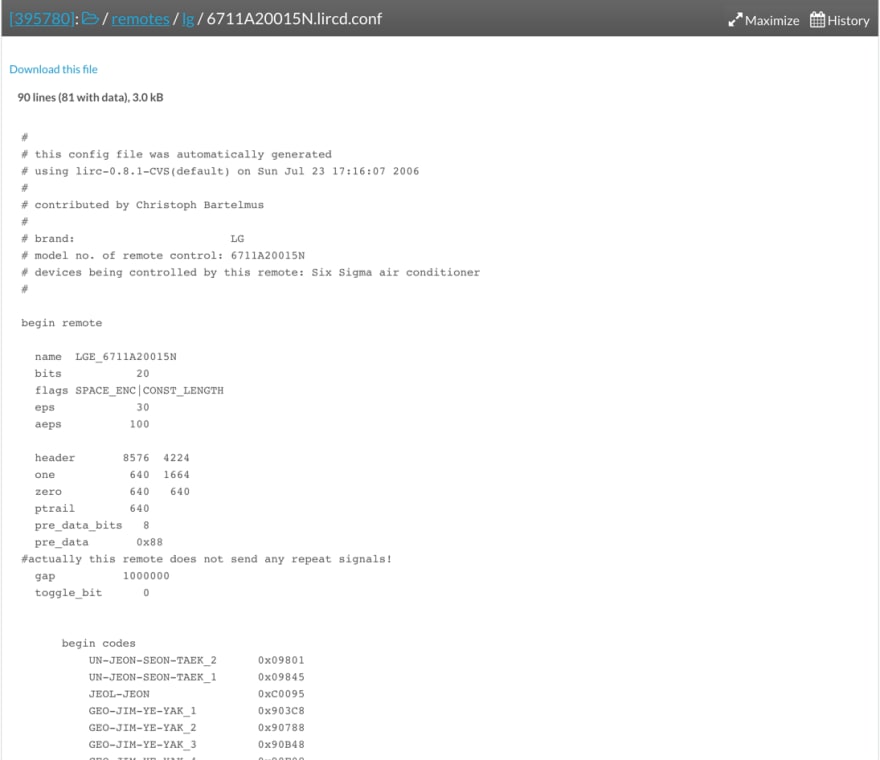 If you can find your remote controller details, download it and copy it to the designated location.

Not every remote controller has been registered to this database. If you can't find yours, you should create it by yourself. Winia makes my air-conditioning system, but it doesn't exist on the database. I've got a local branded TV which doesn't exist on the database either. I had to create them. To create the configuration file, Raspberry PI should be double-checked whether the IR sensor on it captures the remote controller signal or not. First of all, stop the LIRC service.

Run the following command to wait for the incoming IR signals.

If you're unlucky, you'll get the following error message. Yeah, it's me.

It's because both the IR sender and receiver are active. At this time, we only need the receiver, which is for capturing the IR signals. Disable the sender part. Open the bootloader.

We used to have both gpio-ir and gpio-ir-tx activated. As we don't need the sender part, for now, update the file like below (line #5-6).

Once completed, reboot Raspberry PI using the command, sudo reboot. Once it's restarted, run the following command so that you can confirm it works.

We confirm the incoming signals are properly captured. It's time to generate the remote controller file. Enter the following command:

Once running the command above, it gives you instructions to follow. Record your buttons by following the instruction. By the way, the recording application sometimes doesn't work as expected. Yes, I was in the case. I had to use a different approach. Instead of using irrecord, I had to use mode2 to capture the button signals. Run the following command:

Record the button signals. When you open the <remote_controller_name>.lircd.conf file, you'll be able to see some number blocks. 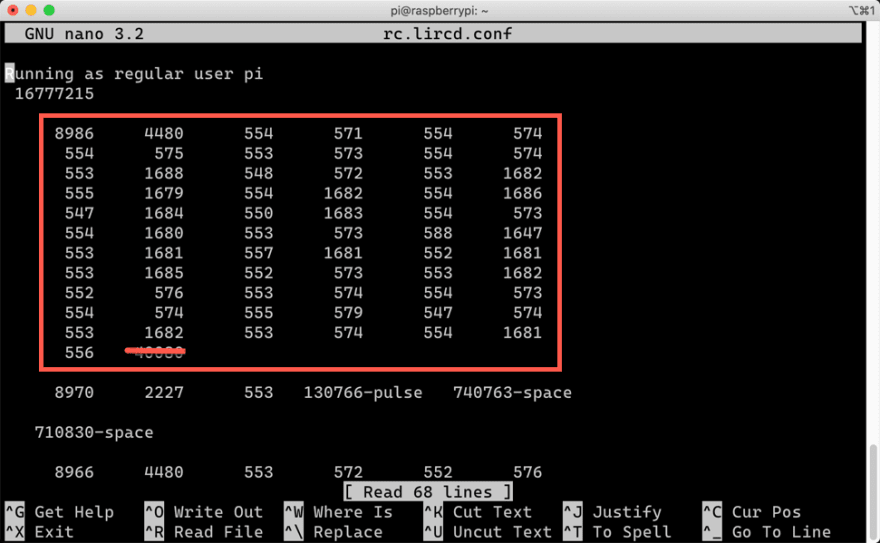 After this update, copy this file to the LIRC directory.

When you go to the directory, you'll be able to find those files. I've got both files registered for an air-conditioner and TV.

As we don't need devinput.lircd.conf any longer, rename it.

Remote controllers have been registered. Open the bootloader for the update.

Run sudo reboot to reboot Raspberry PI. Check whether the LIRC module is working or not.

We can confirm that the LIRC module read both air-conditioner and TV configurations and ready for use! 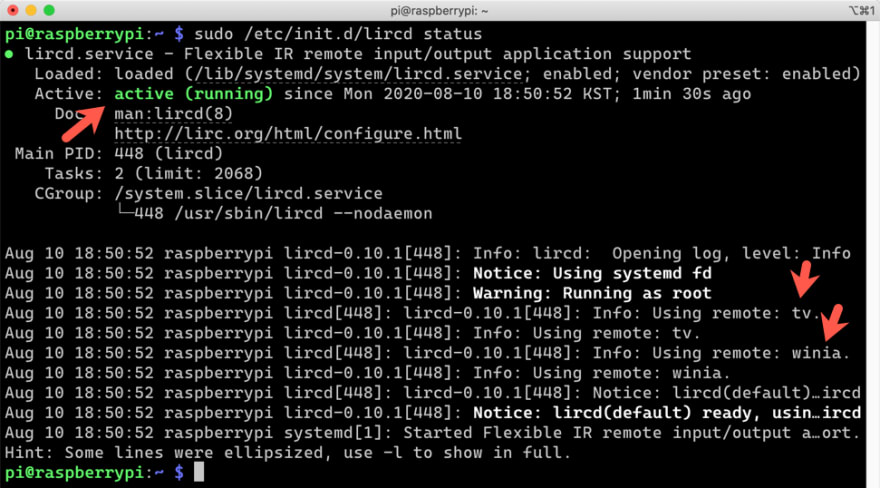 Theoretically, we can register as many remote controllers as we like!

Let's check whether the remote controller on Raspberry PI. Enter the following command to see the list of names that I can execute.

I've registered both air-conditioner (winia) and TV (tv). The following screenshot is the result I've got. Each remote controller has more buttons, but I only need two buttons – on and off. Therefore, I only registered those two buttons.

Although the terminal shows nothing, I actually turn on and off the TV.

Can you see the TV being turned on and off?

So far, we have walked through how Raspberry PI turns into a remote controller that turns on and off home appliances. In the next post, I'll build a Power App and Power Automate that talks to Azure Functions app to access to the remote controller (Raspberry PI) outside the home network.