I couldn’t possibly call myself a warrior in real life, though I would very much like to, but in the virtual world, I am definitely a warrior, maybe not one of the best, but I definitely get by!

How much virtual Assets do you own? I am not talking about Bitcoin or other cryptocurrencies this time, though they also count, I am referring to essential in-game assets, such as Skins, clothes, guns, avatars, virtual properties and more! If you are like me, probably a couple, I started Call Of Duty mobile many years ago, although when I started then, I never would have imagined myself purchasing virtual assets, to me then, it was totally unreasonable to spend on stuff that will never be expressed in any physical way, that cannot be held with my hands nor touched with my skin, but a lot has changed since then, I would say I have come to appreciate the staggering similarities between virtual assets and physical assets and currencies, what is real isn’t necessarily what you can touch, it is all about value, be it fiat or crypto, as long as it’s value holds true and it performs its function!

Within a few enjoyable years of playing CODm I had racked up a lot of virtual assets, either by purchase or by battle, all of which I am happy about, an example of such assets is; Alias - Battleworn, a formidable avatar that has helped me win a lot of battles.

Since I purchased her in the season 8 battle of CODm, and to date, she remains one of my most prized possessions amongst others won from countless bloody battles done teaming up with random fighters all over the globe against random fighters also from around the world.

I couldn’t possibly call myself a warrior in real life, though I would very much like to, but in the virtual world, I am definitely a warrior, maybe not one of the best, but I definitely get by! These are some of the joys gained from gaming, this is one of the crucial reasons gaming seems to always be one of the prime industries that lead and drive adoption of new technologies, serving as an inspiration pushing developers and gamers alike further into the gaming and XR(Extended Reality) development ecosystem! A good game/XR developer is usually also a game player, not just for the fun of it, but also for the social interaction and limitlessness that comes with it. At the very minimum, games such as these push adopters of new technology to actually interact with the technology in new ways, this could also be the main reason the gaming industry and gaming brands like COD and Fortnite are one of the closest in enacting an actual Metaverse.

I have covered quite a bit on the Metaverse in previous posts such as this, so if you find any info missing or wish to explore more, please go over there. So far the term Metaverse is still be established as various people have slightly different definitions, but the majority or a large group of people agree that Metaverses are typically powered by three core technologies; Blockchain, Web3 & Mediums of Access (e.g. XR, Web, mobile... etc), each as essential as the others, yet also powerful and useful in its own right. Blockchain and other innovations born from it (such as NFTs and Smart Contracts… etc.) introduces trust to the Metaverse ecosystem, after all a system without trust, well cannot simply be trusted and cannot be seen as part of the collective future we all strive to be part of and are so focused on building! Ownership is important, properties are also essential, not just in the real world, but also in the Metaverse, being able to buy, store, use and exchange assets while trusting fully in the technology backing the process is essential and blockchain technology provides that needed trust, let's explore a bit about the technology:

Blockchain, the foundations for the new digital economy

A Blockchain is a type of shared database that differs from a typical database in the way it stores information; blockchains store data in blocks that are then linked together via cryptography, making it difficult or impossible to change, hack, or cheat the system, it can be used to create a permanent, public, transparent ledger system for compiling data on sales, tracking digital use and payments to content creators, such as wireless users or musicians. In other words, blockchain is the technology that is used to establish the foundation blocks for this new digital economy. 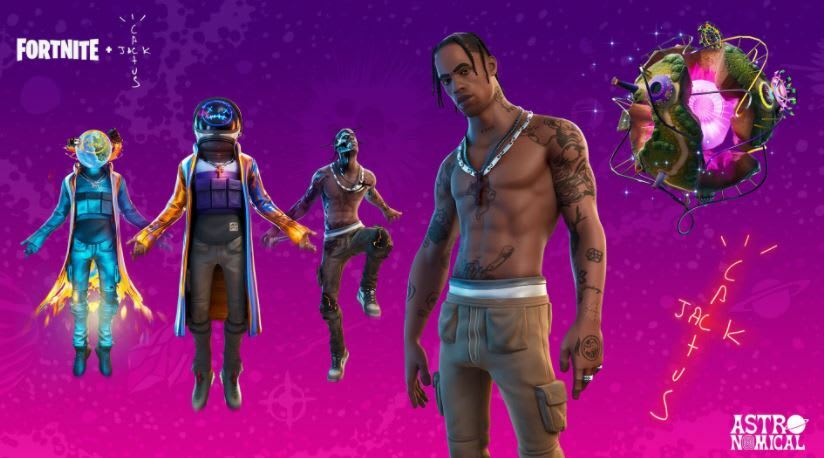 On the 23rd of April 2020, Fortnite a much newer game than CODm organized a virtual concert on its platform, in attendance were approximately 12 million+ players/attendees, people from all walks of life, spread across several continents, with different ethnicity and belief system, an event of such scale would be almost impossible to organize in real life, it would be a logistical nightmare. This concert, like a few others Fortnite has organized, fully demonstrates the power of a Metaverse kind of world, one which isn't about seclusion but about gathering and socializing at a scale the world has never seen before, This also introduces a new and interesting dimension in terms of interaction between artists and fans something definitely worth exploring further.

Travis Scott’s concert on Fortnite was said to have made the Artist a whopping 20 million dollars, approximately worth more than 10 physical record concert nights, which was quite impressive for a virtual event that only lasted a few minutes. The large profit was really facilitated by the sales of in-game gears, V-Bucks (a virtual currency that can be used for in-game purchases) & Emotes, which are basically symbolic representations of emotion, in relation to Fortnite and other similar games & virtual spaces it lets players express themselves, an emote can be used for fun or to troll an opponent. It is very important to note that these virtual events and the sales that preceded and proceeded from them are not about commerce but expression, a core social dynamic, allowing Artists, players, brands, developers, and really anybody to express themselves in new ways, through new mediums, an exciting present pointing to an even more exciting future at hand.

Virtual Assets the coolest thing about the Metaverse

Virtual events like the one explored above are starting to become a thing as many celebrities enter the space to leverage on the opportunities, but events are not the only way virtual assets are sold, already established brands such as Nike, who already possess the experience in making and distributing cool physical products have also found new ways to leverage on the opportunities the Metaverse creates, leveraging hugely on the perception and loyalty they already built outside the virtual world. Bob Greifeld the CEO of NASDAQ recently brilliantly quoted that:

"[Blockchain] is the biggest opportunity set we can think of over the next decade or so."

And I totally agree with him, once Nike had to also worry about how to get quality raw materials for their shoes and worry about machines or people who could shape them into the high end products many of us appreciate buying today, but now, leveraging the Metaverse, they make and distribute virtual brand items without those worries, while even having the opportunity to reach a wider and untapped audience with less marketing, like they did recently also with Fortnite, According to an announcement from "Fortnite" producer Epic Games, Nike's Jordan Brand collaborated with "Fortnite" on a product integration that features new characters in the immensely popular online game wearing some of the athletic clothing brand's famous footwear.

According to Bloomberg, the #FortniteXJumpman collaboration includes two new limited-edition skins — downloadable character versions that consumers pay for — wearing Air Force 1s in various hues, including the black and red, or "bred," coloring associated with the Chicago Bulls, skins such as these on Fortnite are usually priced between $10 to $20, a very great source of revenue for the already profitable brand. The partnership further expands on how invaluable the virtual assets ecosystems are becoming, especially when it's value & uniqueness (intellectual property - because there is no risk of cheap knockoffs spreading in the ecosystem) is backed by a technology such as blockchain, an exciting future is unveiling right in front of our eyes.

We should expect more, probably much more than we currently do on the impact the Metaverse would have on our lives and businesses, it is also an extremely advantageous thing that we can already see what the future holds with the kinds of activities ongoing, people are not just buying emotes and characters, they are buying real estates and making long term financial commitments. My next writup on this will be addressing how everyday people and medium sized businesses should prepare themselves and their businesses for a future in which Metaverses exist, either fully or in a higher capacity than they currently do, I will also focus on the possible impact this may have on the African continent and how youths can strategically position themselves in preparation for the future. Until then, Keep learning.

End-to-End testing with Jesteer will supercharge your development

Babatunde Fatai
Extended Reality Specialist at PwC || Learner, Coder and Passionate futurist.
XR in the 90's - Read in 3D on your computer or in VR with a VR headset.
#vr #webxr #xratlas #programming
Exploring the concept of the Metaverse and what it could mean for humans.
#metaverse #socialpresence #facebook #beginners