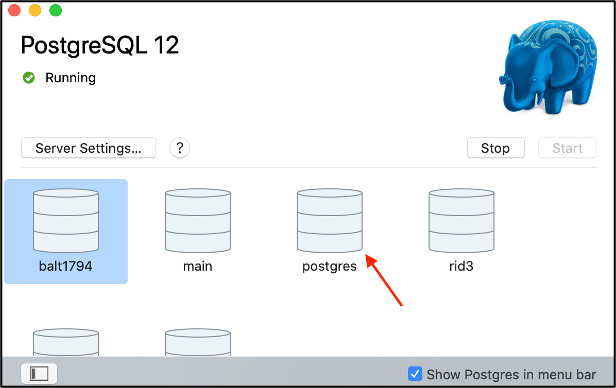 Start by creating a folder where you would store all your project files. I created my folder in the Documents folder of my computer. You can create it anywhere on your computer.

Go to Visual Studio Code and open the folder created on the previous step by clicking on File > Open. Inside that folder create another folder with the name of your project.

Open the terminal window by going to Terminal > New Terminal. A new terminal will appear at the bottom of VS code. Make sure you are inside the first folder you created ('EXAMPLE') by looking at the path in the command line. After you have checked this, go into the folder for your project ('project') by issuing the cd command as shown below.

A virtual environment (venv) helps us maintain our individual projects relatively contained in order to avoid installing Python packages globally on our computer which might cause problems between conflicting files and packages.

We need to create a virtual environment and activate it. In order to do this, we issue the following commands.

After these commands have been issued, check that your folder tree looks like the screenshot below. 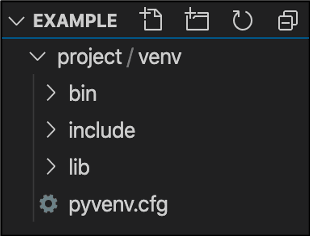 Now that we are confident that the virtual environment (venv) has been created successfully, let's start installing the packages needed for our project. There are multiple ways to install packages, we will use the pip install command.

Pip is the standard package-management system for Python. Pip handles the installation of packages from the command-line interface.

Let's issue the following commands in the terminal window.

Django is a Python web framework used to develop web applications in a fast and secure way. Django is free and open source. It allows for rapid prototyping while maintaining a secure and reliable structure. It's also good for scalability.

Pillow is a Python library that allows us to manipulate, upload, and save different image file formats. This library adds the basic image processing capabilities for any website to handle image files.

If you're using the SQLite3 database, then you don't need to install these packages.

If after issuing pip install psycopg2 you get an error like the one below, please follow the next steps to troubleshoot.

Issue the pg_config command and copy the LDFLAGS path (copy everything after the equal sign) and then paste it between quotes on the following command as shown below.

I have shortened my LDFLAGS path since it is very long and it would be different for each person, but make sure you copy the whole path. Also, don't forget to add pip install psycopg2 after the path. Check for extra spaces. Sometimes an extra space can mess up the entire installation.

The problem with psycopg2 arises because of the path to where PostgreSQL was installed. I experienced this problem using a Mac, I'm not sure if it is the case with Windows too.

In order to create our Django web app, we need to implement a few things. Let's start by issuing the following commands.

The first command creates a folder with the main Python files needed for our project. I chose the same name as the very first folder that we created ('example'). Don't forget the dot (.) at the end of the command. The dot (.) creates the folder inside our current working directory ('project'). 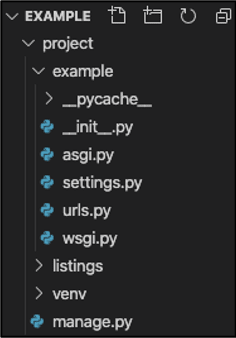 The second command creates an app which contains models.py and other Python files also needed. You can think of apps like small moving parts that we put together to create an entire machine, in this case, a website. In this project, we will have two apps; one for users which will register on our website and the other for listings posted by these users. 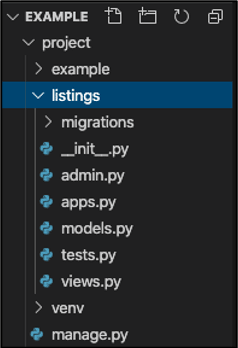 Let's start modifying some settings before we run our project. Go to settings.py of your project's folder and make the following changes. 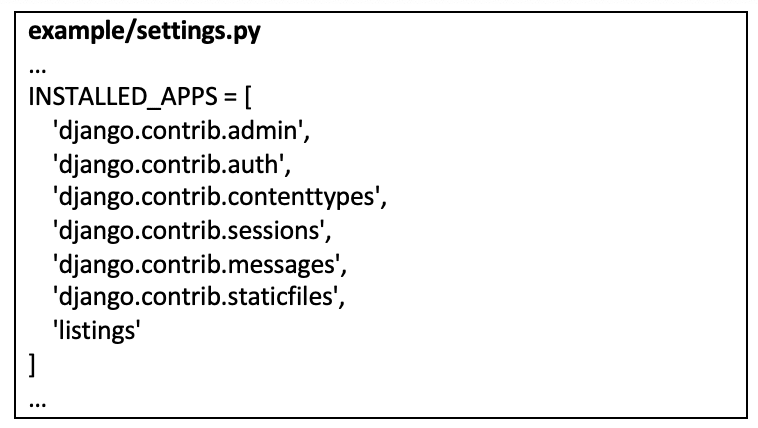 Every time that you create a new app or install some particular packages which are treated like apps, you have to register these apps in settings.py. Some examples are django-rest-framework, django-allauth, and others.

If you have installed an app or package and you're not sure about whether it belongs to the installed apps section, check the online documentation for that package.

The current default database used by Django is the SQLite3 database. If you are planning to use this database, don't edit the code below. 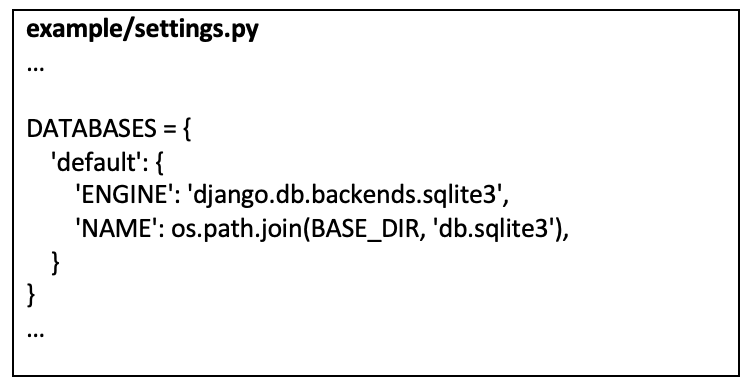 PostgreSQL Database Setup
If planning to use PostgreSQL, make the following changes. 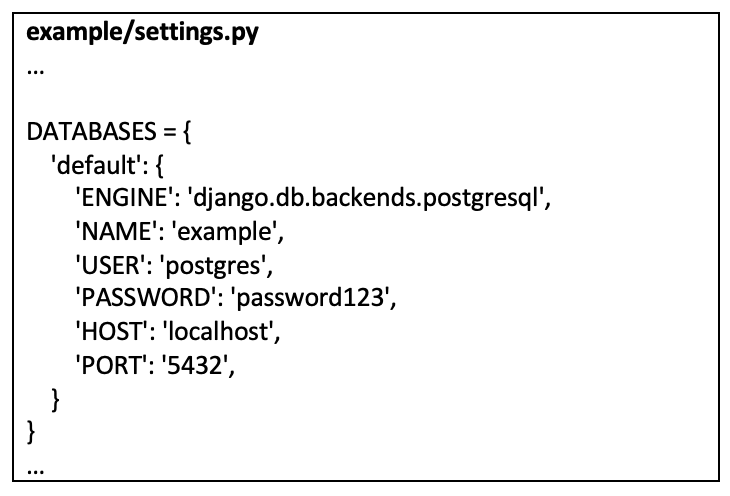 Name of the database. The name 'example' refers to the name given to the database when it was created back in the PostgreSQL Database Installation section. If you gave the database a different name, replace it here.

Refers to the host Django will use when connecting to the database. Since we are using our local machine, we put 'localhost'. If that doesn't work, try '127.0.0.1'. If the HOST field is left empty, Django will connect using the localhost by default.

Refers to which port to use when connecting to the database. In my case, the port is '5432'. If the PORT field is left empty, Django will connect using the default port.

These files could be images, logos, JavaScript code, CSS files, and more.

Scroll all the way down to the end of settings.py. You will see that the STATIC_URL is already there. We need to add the following code as well. 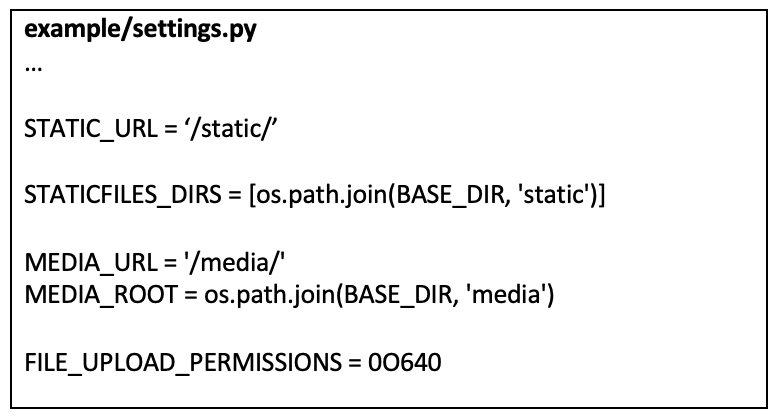 Django will use this path and append it to the base URL of your website. For example, (http://websitename/static/style.css). It's a reference to the static files during development.

Refers to the location of static files in our project. You can have different paths listed if you have any additional directories that contain static files. It tells Django to look into the paths specified for extra static files that might exist in the project.

These are files uploaded by users.

Similar to STATIC_URL but refers to media files instead.

Refers to the absolute path that points to the directory that will hold user-uploaded files.

Sometimes Python throws an error regarding what users can do when an image is uploaded. In order to avoid inconsistencies with file permisions, please set FILE_UPLOAD_PERMISSIONS = 0O640.

A code linter analyses your code for potential errors such as syntax, structural, and best practice errors. If you're not bothered by the red line under your code, you can skip this setup. On the other hand, code linters are useful tools when it comes to learning programming languages.

Try opening a different file such as urls.py from the project directory. Check for problems in the lower part of the screen. If one of the problems shows pylint(import-error), follow the next steps to solve it. 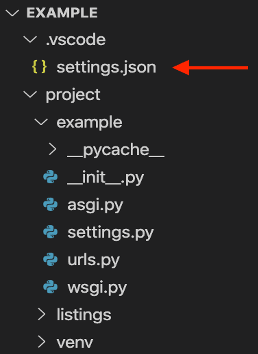 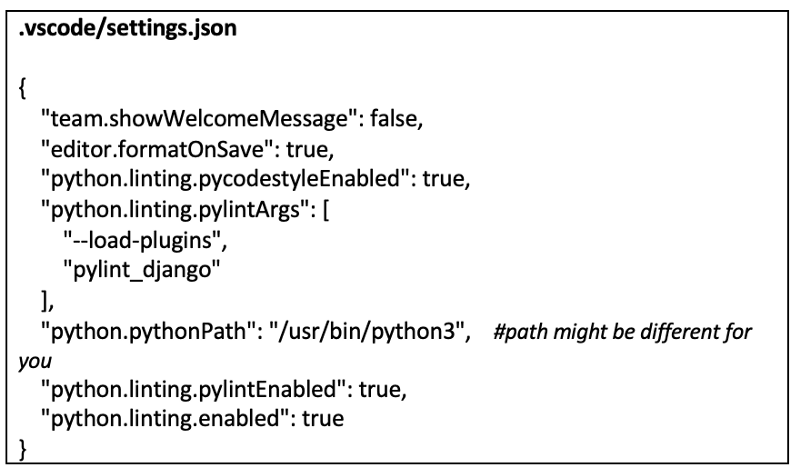 We have covered a lot up to this point. It can be overwhelming, but the best way to deal with this huge amount of information is to take it step by step.
Run the following commands to see your first Django web app in action.

If everything went well, you should see a message like the one below. If not, please read the error in the terminal and troubleshoot accordingly. 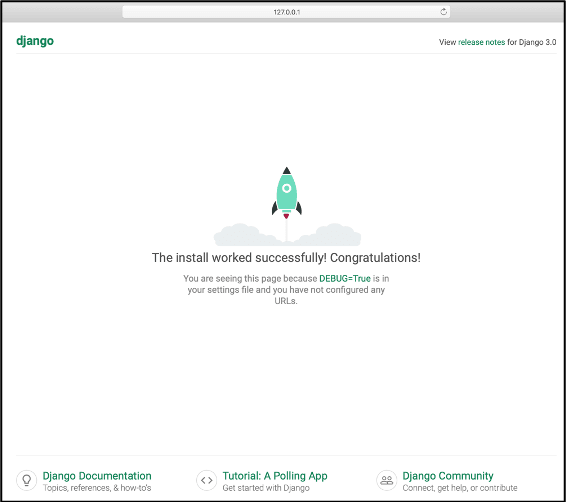 A project is made up of the different apps and Python files needed to create and run a website. On the other hand, an app is a web application which is a part of a website. Apps perform a function or task on a website. For example, in our case, the listings app will take care of posts on the website and the users app will register new users.

If you're enjoying the series, you can find the entire book below.

What movie to watch next ? Amazon Personalize to the rescue - Part 1

Once suspended, balt1794 will not be able to comment or publish posts until their suspension is removed.

Once unsuspended, balt1794 will be able to comment and publish posts again.

Once unpublished, all posts by balt1794 will become hidden and only accessible to themselves.

If balt1794 is not suspended, they can still re-publish their posts from their dashboard.

Once unpublished, this post will become invisible to the public and only accessible to balt1794.

Thanks for keeping DEV Community 👩‍💻👨‍💻 safe. Here is what you can do to flag balt1794:

Unflagging balt1794 will restore default visibility to their posts.