CI(Continuous Integration) is a concept that would interest most developers in a collaborative environment. CI automates the post-coding process of building and testing rather than doing it manually.

Through CI, developers can smoothly integrate their code with other people’s code. This allows developers to focus on coding without wasting their time on integration, which in turn increases productivity.

However, setting up CI can be troublesome and time-consuming, so developers have to decide the extent their CI process will cover.

In our case, we implemented a CI workflow for the Rust projects on GitHub Actions which includes linting, testing, code coverage reporting on CodeCov, and building for release.

Through this article, we hope you can have an easier time implementing CI for your Rust projects.

Example project using the workflow is uploaded in:

This directory contains the workflow files.

The following is a simple explanation of the included workflows. Check out our project README for a more detailed explanation.

This workflow checks for compiler errors and code style inconsistencies.

The Rustfmt job runs cargo fmt --check. You can add a rustfmt.toml or .rustfmt.toml to configure the code style.

The Clippy job runs clippy through actions-rs/clippy-check@v1.
You can add a clippy.toml or .clippy.toml to configure the style.

The environment variables for the job are set as shown below:

The Test job, first, looks for a cache of the dependencies based on the hash of Cargo.lock.

Then, it runs cargo test on nightly Rust and uses cargo2junit to generate a JUnit format test result. And, it runs grcov and rust-covfix to generate proper code coverage data:

Test results are uploaded through EnricoMi/publish-unit-test-result-action@v1.

Code coverage results are uploaded to CodeCov through codecov/codecov-action@v1. For private repositories, add your token from CodeCov repository setting to GitHub Secrets and uncomment the line: token: ${{ secrets.CODECOV_TOKEN }}.

This workflow builds the package in release mode and uploads the resulting file as a GitHub artifact.

The included job uploads the project binary in target/release as an artifact through actions/upload-artifact@v2.
You can configure which files to upload.

Example pull request with a failing test and clippy warning can be found in our repository.
Any failing job will block merging

You can set status checks as required for merging in Settings > Branches > Branch protection rules. 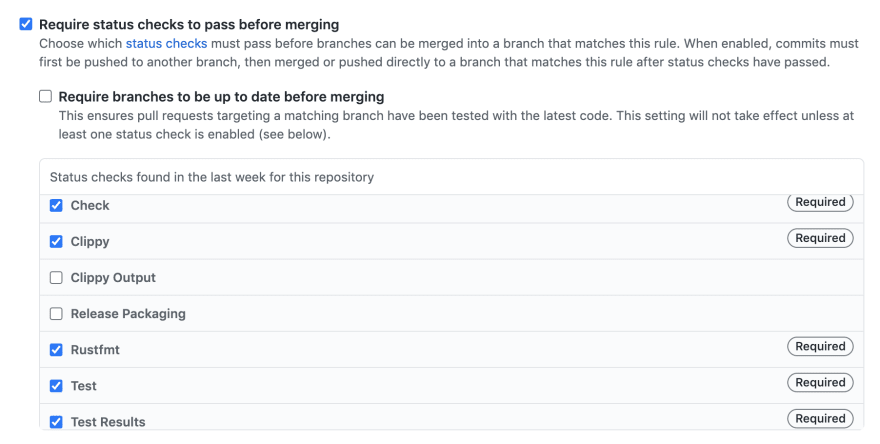 When one or more jobs fail, the PR merge box will look something like below: 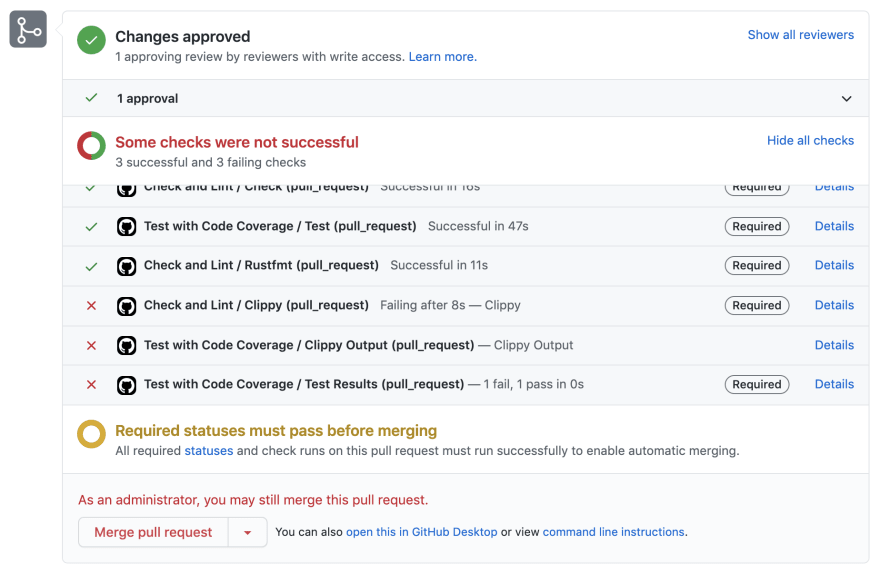 We introduced CI for our Rust project through GitHub Actions. With this, the lint-build-test(+code coverage) process starts automatically when we push our code.

Questions and suggestions are welcome in the comment section.

Learn Docker - from the beginning, part I images and containers

Once suspended, bampeers will not be able to comment or publish posts until their suspension is removed.

Once unsuspended, bampeers will be able to comment and publish posts again.

Once unpublished, all posts by bampeers will become hidden and only accessible to themselves.

If bampeers is not suspended, they can still re-publish their posts from their dashboard.

Once unpublished, this post will become invisible to the public and only accessible to Candy.

Thanks for keeping DEV Community safe. Here is what you can do to flag bampeers:

Unflagging bampeers will restore default visibility to their posts.