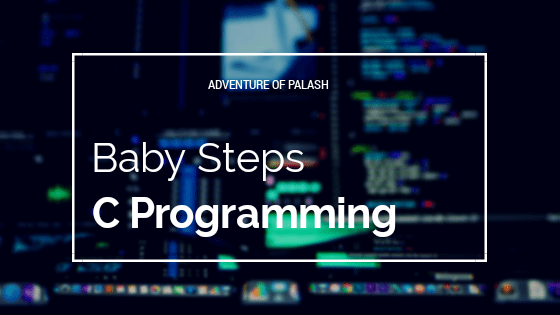 🍭 C is a compiled language, unlike Python or Ruby , C programs must be translated from human readable code to machine readable code.

You'll be Astonished to know that the most Compilers of C (eg. GCC) is also written in C

You'll find people who says , C is so hard but i say nothing is hard it just needs a good teacher to explain everything.

So without further talking let's take our first step in the world of C Programming.

As i mentioned earlier C is a compiled language so you need a compiler such as GCC to compile C programs.

To Run and Compile C programs online without installing anything , Use REPL.it

When Opening Repl.it you'll see a sample program is already written in the left pan. Clear it first.

As I mentioned earlier Hello World is traditional program which every programmer Writes at first when learning new language. Which just prints Hello World text in a console window

Hello World program in C is a bit longer than Python or Ruby.

Write the above code in the left pane of repl.it or if using Local device , write the above script in a file called hello.c and execute the command in terminal

If you're in repl.it click the *Run * button and if on local device execute this command

./hello if on a linux or Mac Device
Or
hello on MS Windows Device

If everything is fine, you'll see a Hello World text in console/terminal

If there's any problem, feel free to let me know in the comments bellow 👇

Otherwise Let's Go To The Next Chapter

Writing code without understanding it is really useless. Copying-Pasting will not work forever.
So, Let's Try to Understand The Above Code.

It includes instructions for C compiler and the definition of printf , this is like a dictionary for a C Compilers, from this Compilers know what to do with printf

Let's Step in the next line, We'll find this,

int is the acronym of integer

And this () parentheses help Compilers identify that it is a function.

Functions are like a jar which contains some special instructions of what to do.

In the next line we'll find { a curly brace , it denotes the begining of a function , it's like a the lid of a jar.

In the next line we'll find

printf is a also like a function but pre-defined , things inside its quotation marks will be written in. Console window when we'll run our program.

Parentheses () denotes the begining and ending of the printf function

We see a Text , Hello World\n inside quotation marks this is the text which will be written in console window and at the end there's a \n which tells our program to start a new line and put the cursor in the new line.

Try changing the text and running it

Actually it's not necessary but it is necessary when working with a program which needs to print two or more lines. But you should keep it as a good practice.

You'll see a semicolon ; at the end of line, it's not for style, it's necessary , it helps compiler to understand that this line has ended now.

in the next line we'll find

which is not actually for us , but for machine it returns 0 to the machine, and that's how machine understand that the program ran successfully and now ending.

If a program returns a number other than, Computer will think that it has not run successfully. Try Changing it and running it.

And finaly at the end , } ending curly brace denotes that our main function is ended.

So guys that's for now, if you've any questions or got any problems please let me know in the comments below 👇