One area of interest to most practitioners is job title. We were interested in examining which titles predominate, and whether the titles cluster around differences in pay and/or experience level.

To glean some basic understanding of current norms, we created several rough buckets of titles. These buckets were “DevRel Management,” “Developer Advocate,” “Developer Evangelist,” “Technical Community Manager” and “Developer Experience.” Some responses did not fall into any of these buckets and are therefore not displayed in the chart. An example of one such response is “Event Management,” which was removed because it was so small that it could not be anonymized.

As we have noted previously, the samples are on the small side, and skewed toward the US. This is important to note, because titles can be highly influenced by regional trends and norms. 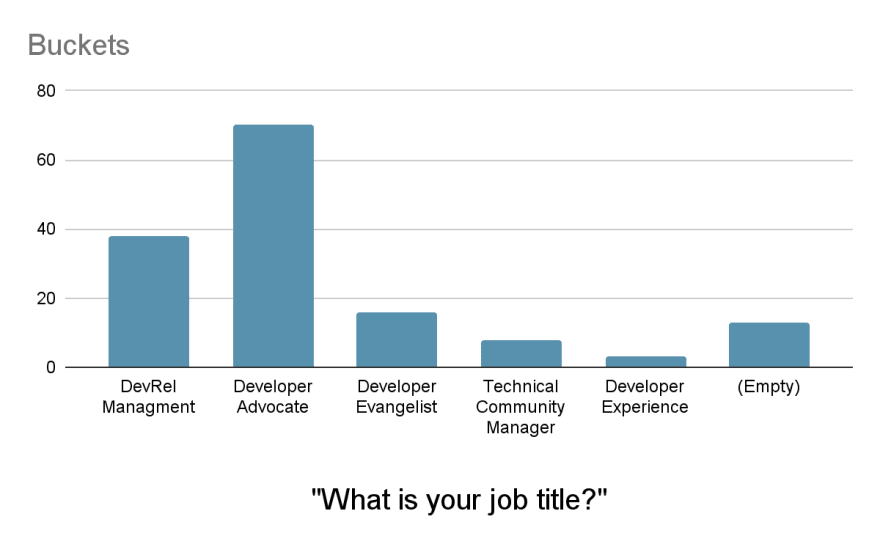 In descending order, “Developer Advocate” is the largest group, with almost half of the respondents holding a DA role (47.3 percent). DevRel Management ranks just below at 25.7%; then Developer Evangelist at 10.8%; Technical Community Managers at 5.4%; and Developer Experience at 2.0 percent. Responses that fell into other categories accounted for 8.8% of answers.

A challenge faced by many practitioners is the overlapping and occasionally arbitrary nature of titles in the field. Additionally, since DevRel is currently gaining interest as a specific profession, longtimers frequently find they have been effectively performing the role of (for example) a developer advocate since before the title existed.

Salary ranges for the buckets are below, with the highest and lowest figures for each bucket group. The caveats: because of issues with currencies, this table displays salary information reported in US dollars. As previously stated, salaries in excess of $700,000 USD were removed, as we are unable to determine whether those are typographical errors or accurately reported outliers. The table does not display Developer Experience, because the sample was too small.

The highest values reported came from US-based respondents. The top five values were all in the US, and 90% of the top ten values came from the US)

1 While this figure of $14,000 seems low, we decided to display it. Potential caveats to be aware of: the lowest values were located in several non-US countries with small sample sizes. It’s possible that such values are significantly lower because of currency conversion rates; or the number could be a typographical error.

It’s worth noting that the “DevRel Management” also refers to level, while the other categories draw mostly on function. For example, while a community manager falls under the Technical Community Manager category, a Director or Head of Community position is grouped under DevRel Management.

Double the Fun: My 2nd Try at Hashnode's 2Articles1Week Challenge

Once suspended, bffjossy will not be able to comment or publish posts until their suspension is removed.

Once unsuspended, bffjossy will be able to comment and publish posts again.

Once unpublished, all posts by bffjossy will become hidden and only accessible to themselves.

If bffjossy is not suspended, they can still re-publish their posts from their dashboard.

Once unpublished, this post will become invisible to the public and only accessible to bffjossy.

Thanks for keeping DEV Community 👩‍💻👨‍💻 safe. Here is what you can do to flag bffjossy:

Unflagging bffjossy will restore default visibility to their posts.